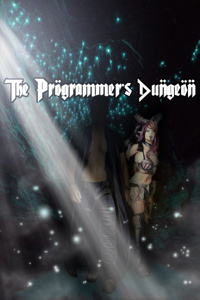 Vincent, a college student from Earth, has been transported to another world filled with strange powers and fantastic monsters. Ideally, this would be the start of his journey to become a legendary hero, build an everlasting empire, and gather a personal harem.

Unfortunately, Vincent is just a programming student with no mystical advantages, special abilities, or cheats. All he has is what's in his head and what he was carrying when he arrived.

“Who needs a cheat?! As a modern man and a programmer, I’ll find a way.” What he was about to say, but endless trouble would force him into becoming a Dungeon Master of a certain new dungeon.

“Fuck it! I’ll conquer the world, uncover the secrets of this world, and ultimately find my way back home!”

“Yes, Master. Your will is our command. We will initiate the world domination phase.”

“W-Wait— I didn’t mean it literally!”

What brought him to this world? What secret does this world possess? Follow Vincent’s journey as he uncovers all these secrets! And… conquer the world, perhaps?

A bit of disclaimer:

English is not my primary language...

If you notice any grammar mistakes, please point them out. (I have enabled suggestion helper)

(For new readers, MC becomes a Dungeon Master at chapter 11-12)

A [participant in the Royal Road Writathon challenge].

A new chapter will be released every four days.

The cover was made by Jack0fheart, so a shout out for him.

The story itself is nothing new, but the writing style needs refining.

Now, its not horrible at all, on a technical level the book is fine - solid verbiage, good grammar, clear and coherent sentences. Its not hard at all to understand what the author is trying to convey to the readers.

But while the writer can make their prose and ideas clear and easy to consume, the contents of the prose itself is rather low on the storytelling skill.

The pacing is really bad. As of chapter 7, its like we are still watching the introduction sequence. The characters are more like anime tropes, not real people. Everybody he meets is some sort of exposition NPC. This person is there to tell him/us about magic, this person is for geography, this one is cover history. etc. It really felt like we are handfisted one exposition scene after another.

Has potential but needs polishing.

Reviewed at: Chapter 20: Learning to Use Magic Part II

Ok so the world and MCs power are interesting, world of magic and everyone has a "calling" some of them are op some aren't and some you just have to know how to use like the MCs op calling of programmer. Language is stilted spelling hd correct it's the word choices that throw me off. Mc is not so secretly 13-14 mentally and finds a girl that's 18 to be a "mature" beauty 🤣 sorry author this screams lack of life experience from you bleeding into your mc. Just make the kid a kid if that's his world view.

It's really, really "japanese isekai" like if you catch my drift. The main character makes use of the "straight man" and other jokes you see in japanese isekai. It also heavily relies of some other aspects you see from it as well. Gothic Lolita being one example.

The grammar and style are readable, but it flows like a japanese isekai, and the grammar does have errors here and there. Nothing unreadible, but it's obvious that the author has English as a second language.

Story is very average, the system isn't really anything new, people have an individual skill, sometimes more but rare. MC has 2 skills, one for interacting with objects via a UI and one for programming abilities. Right now, the story has done basic isekai world introduction, nothing to crazy up to chapter 17.

Characters are probably the lowest out of the novel. Most of the characters are basic stereotype characters you've seen before. Guild girl, innkeeper girl, merchant, infodump NPC characters, violent animalkin character, generic evil characters, and gothic lolita follower character. I haven't really seen a character, even including the MC, that feels like that have actual substance to their character. Almost all of them feel robotic, with the MC feeling like a generic japanese isekai protaganist, who has a generic "Programmer" ability that allows him to BS the world a tadbit.

If I saw this 5 years ago, I would have likely continue to read this, but at this point I just have too many stories and other stuff I'm into to continue to give this story my limited time in the hopes that it might get better when there's better stories I could be reading.

Codes of the simulation

Not a bad start but the conecpt is nothing exceptionally new. While the author does a good job of ensuring that the MC isn't too OP but doesn't also seem too weak, I feel that they miss a key point in the story, the way that the book reads is almost like a diary that the MC wrote years after the fact o the occurence of these events, weird pacing and lack of details.

Reviewed at: Chapter 4: Money is the Key to Solve Problems

MC talking to friends at a vending machine? Stilted dialogue? Strange name like Davincy - hold on, let me check if this is a JP translation? No? Strange!

Ah, the author's not a regular English user, not a problem, let's proceed. Let's support this author.

Young master with hired thug beating up a poor guy (MC's stepping stone #1 sighted), oh! He has bad intentions about the beautiful knightly brave girl? Has twirly moustache? Let's defeat Dastardly and his mutt and save Penelope!

Argh! Can't take it anymore! But I must persist...

Money problem? Let's go to the nearest high status clothier and dazzle him with threads!(...now which novel was that?)

There's a lot to improve but still good potential.

Reviewed at: Chapter 15: What It Takes to Become Stronger

I had a couple of problems with the way this story was written. Despite these flaws, I can see a lot of potential in this story and do believe that there's an audience to this story.

1.) The author glossed over a lot of important details and scenes. A lot of them felt really rushed and missing details.

The MC shouldn't have been able to fall from the cliff and not cry out in pain, for example.

2.) The way the author described people and did dialogue didn't change based off of what the personality of that character is and their emotional state.

When Tia was reacting to the abilities of the MC the only thing that showed her feelings about it were her words which aren't what shows feelings in stories.

It's the actions and way of speaking that give characters their emotions.

3.) The actions of the characters don't fit their presented backgrounds. The MC is presented as your typical college student with a programming major and yet doesn't know how to speak quietly in a library. The majority of time spent for a college student is spent studying, especially in the library, and college libraries tend to be dead quiet in the main sections. This is a conflict between what o find most people typically imagine of a real college student behaving and how the author has them acting.

4.) The most important reason. It feels like (at least in the first 7 chapters which agree what I mainly read) the story is being over sexualized. The majority of interactions that the MC had is with women. When describing girls the author tended to focus on their attractive qualities rather than their distinguishing details. The author didn't make almost any female characters that don't directly interact with the MC. The Author has the female characters interact with the MC for reasons that feel fake, for instance

the Champion's niece or the Librarian

in some ways. This sort of stuff makes me feel really creeped out and uncomfortable.

Despite all that, I can see a lot of potential in this story and do believe that there's an audience to this story.

Solid with Some Intriguing Tidbits

Reviewed at: Chapter 9: Finding the True Usage of Calling

The Programmer's Dungeon doesn't have as strong a start as some Isekai, litrpgs. Vincent is pulled into the other world, without too much fanfare. At first it seemed random, but when I went back and reread the section, it follows directly from his intention to celebrate with his friends. What are they celebrating? Getting some good feedback on the early stages of their game. So, it's a subtle beginning.

The beginning might not be that strong, but the story does build up at a good pace. The world Vincent enters is a typical fantasy world, with a medievalish setting. While most of the elements are common in other stories, the idea of a calling is executed with some uniqueness. Vincent's calling is atypical, in fact, completely unknown in this new world. I can see a lot of potential for him to use his calling in interesting ways.

As far as characters go, Vincent is the only one that has a fair amount of depth, which I think is appropriate for this stage of the story. He's level-headed and pretty laid-back, as shown by his calm reaction to the new world. The first thing he does is a bit of research. It's a a touch too convenient that he has a handy information source so readily available but also amusing.

In fact, the story doesn't put too many obstacles in the way of Vincent. Most of the side characters are friendly and willing to help. Honestly, friendly isn't bad. It fits with the tone of the story - friendly on the surface with something darker lurking beneath. It does affect the excitement level early on in the story, but by chapter 8, things are picking up. That's soon enough for me.

Grammar isn't perfect, but it really isn't that distracting either. The style is clear and concise, not too descriptive or atmospheric. It does the job.

Overall, I think The Programmer's Dungeon is going interesting places. It's the kind of story that builds rather than hits you in the face with shock factor.