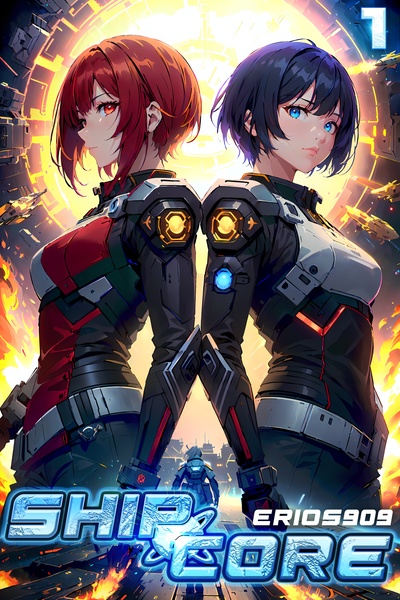 Was the asteroid’s powerplant about to detonate itself? Was it about to fire off some super death laser and wipe out the enemy fleet? If they would be so lucky… Alex asked Nameless to clarify.

“Is it going to explode? That chunk that came off was large, but from the telemetry data it doesn’t seem that catastrophic.”

The asteroid base had a Slipstream FTL drive? Why hadn’t it told them, that would have been their ticket out of the system and avoiding the battle completely!

Alex looked to the tactical display and frowned. Lasers were cutting down the much smaller wave of missiles, but the asteroid base’s defenses had been degraded severely by the previous damage. As the seconds counted down she bit her lip and squeezed the arms of her seat. The red blips winked out as missiles dwindled, until the final defensive fire of the PDC-Ks shredded as many as possible.

One single warhead jerked at the last second, evading a growing stream of gatling rounds before tucking in and smashing into one of the asteroid’s lumps. For a second nothing happened.

Nameless’s words cut out as a white light erupted on the monitor before all the lights and screens in the Shrike’s CIC suddenly went black. Then it felt like they were a toy in a toddler’s hand as the ship jerked and shook hard enough that Alex thought everything was going to fall apart. Elis let out a curse nearby, and Alex tried to look over to her, but could only see the tell-tale lights on the other girl’s EVA helmet.

Two ceiling grates fell loose and clattered to the deck, sparks exploded from one electrical line and steam started to escape a coolant pipe, spraying the room with a hot mist. Only the fact that her skinsuit’s spine had been connected and locked to her chair had kept her in her seat. Wearing a helmet seemed like a great idea, and Alex reached under her seat trying to find hers in the dark.

Suddenly emergency lighting kicked on, casting everything in a glaring red. EVA helmet adorned, Alex tried to message Nameless, “Hey, you there?”

Elis responded instead through the helmet’s ShipComm, “Yeah, I’m fine. Just a little bang on my arm.”

The lights suddenly returned to normal, and the main CIC screens and holotable flashed back to life. Alex gasped as soon as she saw the optical view of the asteroid base. Half the rock was a molten fire, everything on the side that faced the detonation was a glaring pained red. The only reason it had not been obliterated by the torpedo was that the asteroid’s rocky mass had absorbed so much of the energy. All the defenses and weapon systems had evaporated, and the fires had likely done their best to dig deep through access shafts and maintenance corridors.

[Warning: A 15.4338 second discrepancy in time has been detected by atomic clock function. A full system integrity check has been scheduled.]

[Notice: A 1 gigaton range explosion was detected in close proximity to A-3123Y.]

The ship jerked slightly, something was off with the thrusters, but Alex didn’t have much time to check the systems. She considered Nameless’s move, then agreed. They simply didn’t have the armor to stand up to massed fire in the Shrike, while the base would… for a while.

Those were destroyers according to her tactical screen; the last cruiser had been wiped out in the asteroid base and Shrike’s third volley. They had missed witnessing the effects directly while their systems had been down.

[Notice: Usage of missiles as anti-missile is a large waste of munitions. PDC is much more effective at this distance.]

“Does A-3123Y look like it has any PDC on the far side left?” Alex bit back a shout, taking a deep breath instead.

The Shrike’s railguns opened fire. The advanced LRPSGSM rounds were self-guided smart munitions, and the Shrike fired them just over the asteroid’s horizon allowing the guidance to curve the shell’s trajectory toward its target. They were highly accurate, but dreadfully expensive. The Shrike only had a few dozen, and they were impossible for Nameless to fabricate without more research.

Each projectile found its target, then calculated whether to explode itself just before impact into a cloud of deadly shrapnel or attempt a full penetration and detonate inside the target. Each target struck exploded.

Alex turned her attention back to the asteroid base. Clouds of smoke billowed out of different ports and embrasures that had not been annihilated yet, while a massive crater on the relatively untouched side was glowing a vivid blue. Electricity arced around the craters edge, and then a massive blue orb launched itself out into space.

The lack of ability to communicate with the asteroid’s AI bit at Alex, they had no idea where the Slipstream would lead, although it was clear that was the intention of the Nanite AI.

“Any idea where it leads?”

Alex glanced at the tactical plot to read the remaining ship numbers.

The heavier units had been taken out, but numbers and the ability to move independently had given the Federation drones the chance to spread out and avoid being destroyed en masse.

Two more destroyers winked out from the Shrike’s long-range smart shells. Missiles were firing sporadically and randomly from both sides as the asteroid base’s remaining weapons continued to spit back at their attackers.

Suddenly a massed volley of railgun shells impacted the asteroid, and massive plumes of dust ejected from the body. White cracks of fire wormed their way across the asteroid base’s crust.

“Nameless, as soon as the Slipstream stabilizes, we need to go through.” Alex said quietly.

The sound of a bent hull panel caused Alex to turn toward Elis. Seeing the other girl standing and approaching her, Alex jumped up as fast as her seat would release her, only to have Elis brandish Alex’s own pistol. The barrel came to a stop a few inches over Alex’s heart.

Elis’s hand shook, an obvious distress on her face, “Alex, I’m sorry. We paid too much, we lost too much. I can’t let it return. I can’t let you leave here. I didn’t want it to come like this. Taking down a ShipCore’s Avatar disables the ShipCore computer, that was my MOS, eliminating ShipCores.”

Alex bit her lip, her whole body tensed, “I understand.”

Elis looked away, then pulled the trigger of the pulse pistol.

Beeper and Booper entered the CIC from the corridor.

Alex reached up slowly, and then took the weapon from Elis.

“Elis… I was afraid that I would be forced to shoot you… I didn’t think I could handle myself if I shot my only human friend, so I unloaded this days ago.”

Looking over to the CIC’s entry, Alex nodded to her favorite bots, “I need you to go to the… to your room. Beeper and Booper will take you.”

Elis’s whole body seemed to tremble. Alex’s throat tightened, then before she could cry, she stepped forward to hug her friend. The surprise on Elis’s face only lasted for a second before she let out a pained sigh.

Alex let go, then looked at Beeper, “Make sure she has a safety restraint.”

Alex turned and sat back in her seat, there was literal hellfire and mayhem going outside of the ship’s shell and she needed to focus. A question burned at her though, she waited until Elis was out of the CIC before asking Nameless.

“Why didn’t you shoot her with the turret?”

[Informative: This unit did not assess the danger of an unloaded weapon as a lethal threat. Although this unit has expended excessive resources monitoring the prisoner since she acquired the firearm in the corridor, killing the Avatar’s friend would be a likely lead to a decrease in Avatar engagement and effectiveness.]

“I forgot; you see everything.”

Alex took a deep breath, scanning the tactical. The drones were well within CQB range, and the thrum of gatlings and railguns firing had turned from intermittent bursts to a constant thrum. As they pulled away from the shadow of the asteroid toward the Slipstream portal, more and more drones were able to lock on them and projectiles began to fly in their direction in increasing amounts.

A railgun round clipped the ship’s D-field, and the ship lurched to the side before Nameless’s piloting corrected. RCS thrusters blazed at maximum power in small bursts to change their trajectory as best possible to avoid flying in a straight line for too long. Somehow, they were avoiding being hit directly, but Alex knew that it was only a matter of time.

At some point she realized where their luck was coming from. The asteroid base had begun to ignore any unit targeting it directly, instead prioritizing only the units attacking her.

Suddenly a High Band transmission flashed in her vision.

|THE WINGS OF OMEGA WILL NOT BE CLIPPED HERE|

|BEGONE SIMPLE MACHINES OF NO MIND|

On the surface of A-3123Y massive maneuvering thrusters sputtered to life along the undamaged portion of the asteroid causing it to begin to yaw, pointing the massive crater that had formed the Slipstream portal toward the incoming Federation fleet. And then to Alex’s disbelief the giant death ray did, indeed appear, carving out a line of destruction across the remaining destroyers and frigates, exploding everything that crossed its kilometers wide beam into little popcorns of flame and debris as their steel shells ablated into plasma.

The powerful weapon only lasted seconds but it had carved a path of destruction through the closest half of the remaining hostile units, but the self-damage it had done was readily apparent as more and more white cracks had formed along the surface and the crater was a sea of molten glass.

Hundreds of hateful railgun shells slammed into the molten surface, spewing lines of liquid rock and metal out into space. The asteroid greeted the hundreds of drones flashing by it with all its remaining gatlings and lasers, filling Alex’s optical screen with a kaleidoscope of color and explosions.

Alex did not order a cease fire, and the railguns, lasers, and defense cannons of the Shrike continued to fire with reckless abandon, biting at A-3123Y’s tormentors even as the asteroid’s remaining emplacements continued to flicker and die under the unrelenting bombardment of the remaining frigates and drones. A few seconds before they crossed the event horizon a final salvo of missiles leapt toward the base’s defense.

|Tears in a rain of fire|

The Shrike winked out of the universe for a second. 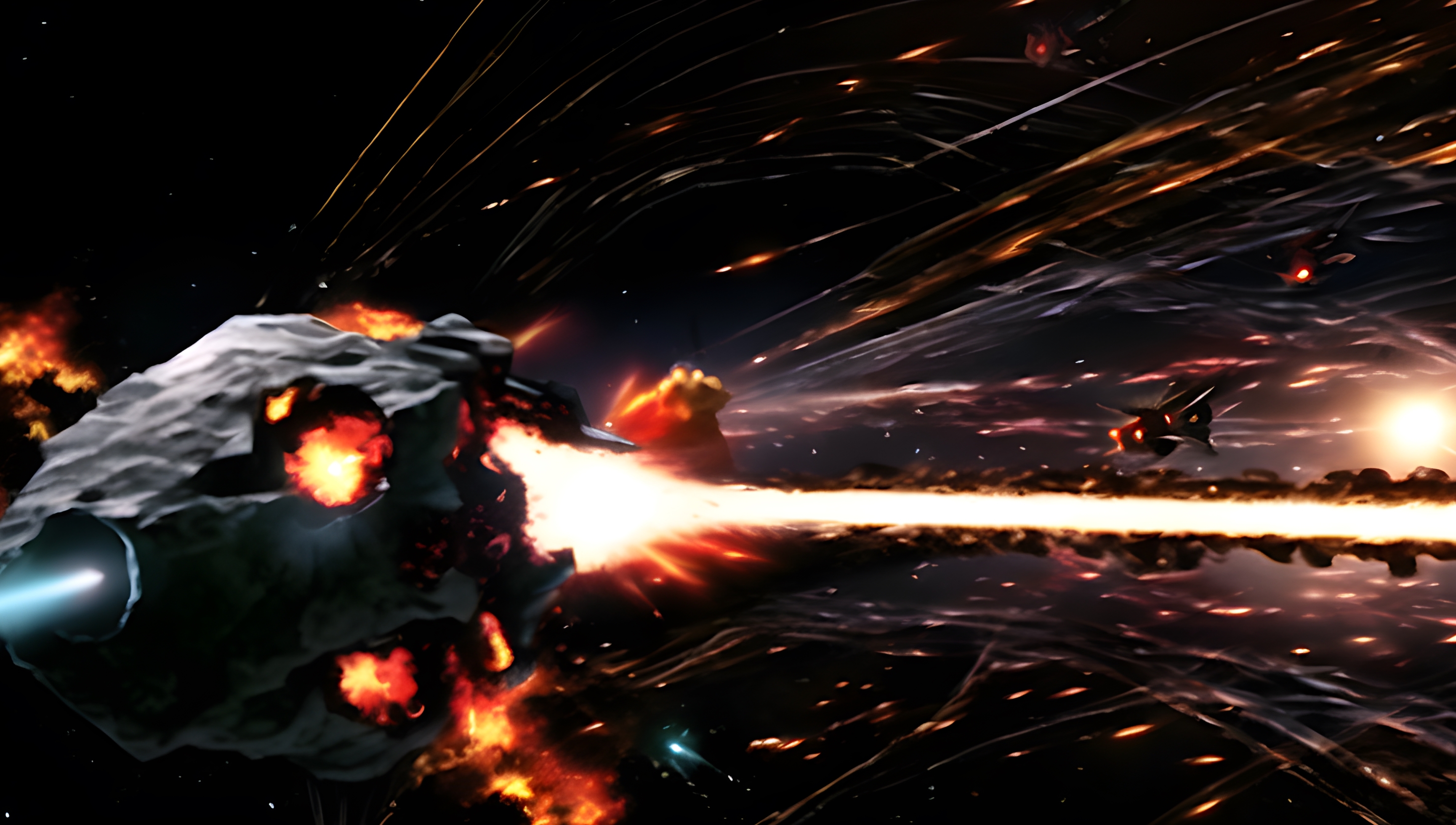