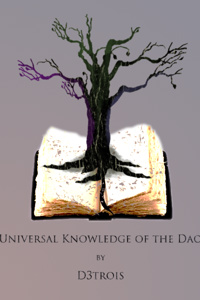 Universal Knowledge of the Dao

"No Father I don't want to be married off to an official of the Big City. I want to become the Chief Librarian, like Second Uncle !"

There is no choice left for Shin Sumi but to escape. Her plan is settled until she finds a strange book that forces her to join the famous Dark Sky Starry Sect.

Will her path lead her to become the librarian she wanted ? Or will her craving for knowledge be satiated by something more... Magical ?

[English is my second language, bear with me for the small errors please]

Good start, doesn't stick to it though.

First let me say that I am eagerly waiting for each new chapter.  Its a joy to read and I recomend it for most people who enjoy typical starts to Xianxia. It started out looking like it might be that most unique of creatures, a original charater type for a Xianxia...

Which leads me to my first problem with the story.

1:  She went from just wanting to read books to basically not reading any more books. Her fundametal uniqueness as a character seems to have gone out the door and she is now doing the murder hobo thing on every animal she finds.  I could wish her cheat would focus more on the book side of things and less on murder hobo with a steriotypical boring sword.  Maybe librarian and studying makes her better at making and using talisans.  Something other than the freaking overused waving a cliche magic sword around murdering everything for its core.

Here are two more such problems.  Frankly though the next two are mostly my preferences.

2:  Op cheat is Op.  Seriously the cheat is a bit too much.  Directly turning low class spirit stones into high class.  if it just purified them with out increasing the amount of spirit in them I would like it better. It feeds on the impurities and leaves her purer power to absorb?  Something more than just getting something for nothing.

3: Murder hobo on animals aside I would wish that they would do more than just remove a core.  Seriously, skin it for the hide,  use the blood for ink base on your talismans, Something.  Not just 500 dead animal bodies left to rot everywhere.

Final real issue that is mostly a fixed issue.

4. Starting chapters have really blocky prose.  Its a bit obnoxious, but the author clearly learns as he goes along and that fades out fairly quickly.  After a bit i stopped noticing.  So good on the author.

Reviewed at: Chapter 35 - The End Is In Sight

To start with, I like this authors take on cultivation. There are commonalities, but one of the things I like about the genre is that it's easy for an author to put their own spin on how it works. I also like the challenges that get put in the MC's way, particularly trying to make it as a talentless mortal in the sect while pretending to have great talent.

On the orher hand, this story has a lot of issues. The grammar and writing style need work, but that can come with editing. The story itself is rushed and has a level of naritive convenience to make it so. The characters are shallow on the whole. Sumi is the MC, but to me she has never felt like a real person. She has only ever been what the plot demands of her.

Overall, it's as enjoyable as a cheap hamburger, decently tasty, but don't expect anything great or special.

Reviewed at: Chapter 20 - Experience is Knowledge and Opening Doors

This is a pleasant story about a girl with no talent who gets lucky. Really, really lucky. More than anything, she wants to be a Librarian. I look forward to seeing the path she takes to get there! She doesn't show the arrogance you associate with xianxia MCs.

My only criticism is that the grammar isn't always right. However, it's not enough to take me out of the story.

It is still too early to review the story comprehensively, but so far it has been a pleasant and interesting read. I will follow the novel and in the future I will leave a more detailed opinion, just hope she will continue in character in the future and not become some dumb protagonist later on. Thanks for the story author and hope more ppl follow it.

One book to rule them all

Shin Sumi, a sheltered girl, had an admirable lifetime plan to surround herself with books.

As we all know, life has a way of interfering with our plans. Shin Sumi was traveling in a forest between home and her local library when her plan derailed.

A magical book, disguised as a nut, bites Shin Sumi. Since the nutty book was stronger than her, she winds up following directions to join a martial arts group and grow stronger. The magical book helps her

by refining pills and treasures.

It also creates entries with better versions of techniques she learns.

It also records the plants and animals she defeats and harvests.

a bell and a sword.

swallow other books and add better versions of them to its pages.