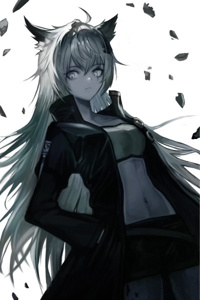 ISEKAI TITLE - It seems I've been reincarnated as a heroine in another world. Yeah, how about no?

IMPORTANT NOTES - While the story is not allergic to wholesome moments, I would like you to understand that this is the story of a villain, not an anti-hero protagonist. Depression, psychopathy, dark themes, uncensored violence, horriffic suggestive themes; these are all a mainstay of the series. I would strongly advise anyone who wants to experience "Dr. Feelgood" to go look elsewhere.

Summary - Kamiyama Nori is many things; a bully, a delinquent, gamer and fanatic of all things martial. What she is not however, is anyone's 'hero', and she will do everything she can to rid herself of that title, even if it means the deaths of many, many other people. Her jaded, manipulative and opportunistic nature, combined with a 'noble', divine birthright is bound to quake the hearts of any whom would dare to stand in her way, good and evil alike.

Cover - not mine. Lappland fanart is good civilization, as well as a good referrence for the main character's physical appearance.

A human descends from the gods

I loved the making of a monster in the prologue. It leaves me hyped for the mess she will create when she is unleached upon the world.

The story tells the journey of Anne. She is reborn with power and recognition. Yet, the most important person of all -- her -- is left doubting her own role and nature. She set sails to build her own identity.

Of course, you can completly ignore the MC human insecurities and just enjoy the mayhem on her path. But you might as well enjoy the whole package and understand why people die.

Fair warning though, this is Joyde's story. So expect at some point: uncensored violence, crazy lore and plot twists.

Right in my veins.

Reviewed at: Volume One: A Dangerous Choice

Warning : I am biased.

This is some very, very good material right here, quality reading, i loved all of it so far. The kind of reading that is consumed without limitations.
With that said, the author's warning is no joking matter, this is not a story for everyone, gore, dark stuff & cie, you'll meet them all the way.

Style : Description of the characters' psyche and the reasoning behind the mc's actions is very well put, all of it makes sense in a way, there is no illogical holes in the behavior of the mc.
The descriptions of the environments are good enough for us to feel like i was here.
The surprises are here, we can't predict what's going to happen next, that's appealing and thrilling.

Story : It's a bit too early to give a full rating of the story, but as said above, the build up is carefully and well made, there is a lot of hidden and hinted lore we are eager to discover, and of course, following the mc's actions.

Character : Mc's is a vilain, don't expect her to be a good girl, she is not. Yet the prologue and her thoughts make us feel sympathy for her, she is well written, as well as the other characters such as her family, or even some characters who make a small appearance, are well treated when it comes to their building.

Grammar : I am not good enough in english to judge someone's else grammar, that aside, i didn't see anything that made me frown, so it's all good.

Overall : This is heroin.

I really like this story, and the prologue is the best part. More than anything I'm excited for how Anne (The main character) develops as a person, but I'll get to that soon.

Style: Usually when people use the word 'evil' on RR they mean 'antihero'. Anne is a truly bad person, someone evil, who does bad things because she can. This is shown through the setting super well, both for characterization and as a functional setting. Things make sense and are fun to read through.

Story: The true blue story hasn't quite kicked in yet, there's been a lot of build up, but I'm already fairly invested. We've got motivation, background, a clear objective, and it's all working together well... Really what more can you ask for?

Grammar: I'm bad at rating grammar. I've read so much bad fanfiction that I just pass over misspelled words. Anyways, I noticed nothing. Moving on.

Characters: Here's the gold! Now, Anne, the person we learn most about, is a bundle of issues, real cold and a total psycho, but written out you can sort of get her mindset. It's warped from standard human ideas. Ideas like 'murder is bad' just slide off of her. This kind of thing is hard to write, for real, but here it's written well enough that you can just sink into it. It's kind of odd to read about murder for the sake of itself and be like "Yeah, that seems normal", but there's enough background and character development involved that it just works.

Besides the evil we've got some some strong side characters as well. Anne's twin sister and grandpa are the most memorable to me, her sister especially. Her twin is probably more moral than Anne, though with warped morality in the picture take that with a grain of salt, and Anne's grandpa is a cool guy who's got a lot of power in the background and someone who really clicks with Anne.

There's some other family, like Anne's mother, involved, but no truly notable side characters outside of family and a couple one-off characters (an orc named Grunt and a bookkeeping cat girl). That makes sense with Anne being so cold-hearted but it's still a little lame from a reader's perspective. Character flaws mess with writing in first person, y'know?

Conclusion: An awesome story, though genuinely evil characters will probably put some people off. I'm excited to see Anne change, both so I can see character development and so she takes more note of the people around her.

i like the premise of an Evil MC that is actually Evil and not an Anti hero and so far you have delivered. i hope the cast extends a bit now that she is in the city and includes other POVs maybe more time with her Friend she made that is a nice character or the cat receptionist.

I guess giving this a all-star treatment isn't really fair, but I want to see this novel go far so bite me. Props to author for originality?

To put things in perspective, Isekai are often written in a way that depicts a social outcast in our world being accepted by a fantasy world as part of either normal or top class society through their god-given talents, obsessive training, etc, but while this work for people who just want to read casual wish fulfilment, it grows quite stale really quickly for everyone else.

In that regard, I want to say that this novel is (so far) perfect for people who are sick and tired of regular isekai.

The reasons for this are many-fold, ranging from the fact that the reincarnated main character responds to becoming part of an entirely different species and culture in a sane and logical manner, which is to say that she adapts to it rather than pushing supposed human superiority onto her new friends and family. This isn't really a surprise, as Anne (the main character) isn't the regular loner/social outcast that most isekai characters tend to be, but a formerly "normal" person from our world transported into another suddenly and then granted divine powers.

She reacts to these news is what is a perfectly reasonable way too, as she starts out completely terrified of her situation with much of the first chapter dealing with her doing her best to keep her own sanity. Being given great power also serves to transform Anne from a normal person into a power-drunk, egoistical monstrosity bound by the societal values and norms of her current race.

Depth is added to the character through the fact that her human memories still exist, which makes her feel constantly imperfect and inappropriate, which is doubly damaging considering her newfound social status. She pushes and punishes herself hard, but does not expect the same from people she cares about, while treating others as either food or dogshit.

I'll take this moment to praise the Authors capacity for dramatic flair. Bravo! It really adds a lot to the story.

Anyways, grammar wise this story could certainly do better but that applies to pretty much every novel ever written. With that said, I haven't really found any immersion-breaking faults, apart from a few, incredibly rare typos.

I don't honestly know how to rate "style"? As far as I can tell, things are in proper order.

The side side characters of the story could use some work as they're mostly one dimensional. Saying side twice because the main cast has a ton of flavour, while the rest are treated like basic npcs, though the story is only a dozen chapters long at this point so this is liable to change anyway.

That's about it, hope this helps!

Tldr: if you can handle gore, racism and violence, give this a try.

Oh, on that note, the authors summary warning should be taken very seriously.