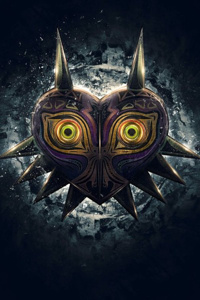 I made it, Link thought, I finally made it.

He stood in the Goddess statue's folded hands, gazing up at her stone face. His eyes fell to the golden Triforce hovering before him, bathing him in its luminance. In that moment, he was reminded of all the times before he would be reunited with Zelda, the anticipation flooding through him and making him almost giddy with excitement. It felt like those times, only better.

Fi materialized beside him, jerking him out of his reverie.

"Master, I believe at this juncture a prayer is required. The ultimate goal we have travelled so far for is now within reach. Focus now, and wish with all your might for the Goddess of Time to appear before you."

Link nodded dumbly, his heart thudding in his chest. He closed his eyes, trying to calm his wildly buzzing thoughts so he could focus.

"Oh my. I see you're still looking delicious as ever, Link."

Link's eyes snapped open, his hand unconsciously flying to the hilt of his sword. But standing before him was not Majora, not even Ghirahim, but someone he had never before seen. It was a tall woman with dark skin and violet eyes, her snow white hair contrasting sharply with her black dress, which didn't cover all too much of her. She stood a good few inches taller than Link, enabling her to look down at him with an almost demeaning expression. But there was something else in those violet eyes too, a sort of hunger which sent shivers running up Link's spine. The woman held a staff with a spiked head, and the towering hat she wore made her seem even taller. Link drew his sword.

"Ooh, are you going to threaten me with your shiny new sword? Honestly, men are hopeless. They get a few upgrades and they think they're invincible. Though I suppose you wouldn't be complete without that sword."

"I said who are you?" Link pressed.

"Your biggest fan," the woman answered unhelpfully, "Which means you must know it breaks my heart to have to steal this from you after all your hard work."

She gestured to the Triforce.

No. This is not happening. No more freaks swooping in and snatching everything away from me like it's nothing to them. Not anymore.

"You're not going to touch that," he hissed.

The woman cocked her head to one side, placing a finger on her lips and leaning ever so slightly forward.

"Mmm. My brave little hero. What are you going to do to stop me?"

Before Link could even lift his sword, a voice rang out, "Cia, stop!"

He whirled to see another woman standing next to him. Her face was almost identical to the first's, but her hair was cyan, and she wore white. A book was clutched under one arm.

"Cia," she said, "Don't do this. You'll be letting chaos rule unchecked! Remember who you are!"

"You mean remember who we were, Lana?" Cia shot back, "You're a little late, darling."

"You can't really want this!"

Then Cia's staff whipped out, that spiked head darting forward like a snake's head. Lana ducked it, but Link wasn't so lucky. He barely managed to catch the blow with his sword, but it glanced off his steel so hard that sparks went flying and he stumbled backward. Just like that, the ground disappeared beneath his feet and he was falling through the air.

He sheathed his sword, struggling to get out his sailcloth. The cloth caught the current, easing his plunge substantially. He breathed a sigh of relief.

Then he saw it coming. A blast of dark energy, headed straight for him.

He heard a rip and he started picking up speed.

At a loss as to what else he should do, he raised his fingers to his lips, uttering a shrill whistle. He heard his Loftwing's answering call.

He's too far away, he thought, panicked.

And then it was too late. He hit the ground, there was a blinding pain in his right arm, and he blacked out.