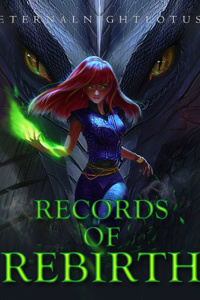 Aurelia Ross has been reborn! The gods deemed her life too short and unfulfilled so, they placed her into a remarkable new world.

Reborn on the planet Aeon, a vast continent awaits her to explore. She will build a new life, rewrite past wrongs and grow strong so she can finally be happy.
However its a bit strange.

Something is terribly off with this rebirth. She has never cared for gods so why would they be so merciful to her? A rebirth? You must be joking.

[Bite]? [Poison Fang]? [Scent]?
Is somebody playing a prank?
Why are there suddenly snakes everywhere?
I've been reborn as a WHAT?!

Return me back to my world please. Gods shouldn't just do as they please. I didn't want to die in the first place!

After losing her life by being in the wrong place at the wrong time, she reincarnates to a world filled with magic and monsters. Follow Aurelia on her journey to survive and grow as she explores her new Labyrinth home as one of its many monsters.

This story will contain multiple protagonists further down the line. But for now it mostly focuses on Aurelia and her adventures.

Disclaimer: The image belongs to the rightful artist. No copyright infringement intended.

Reviewed at: The Edge of The Cliff

No noticeable grammar issues, but I'm no grammar wizard, so what the hell do I know? Characters have well-defined personalities, generally no issues there.

The biggest and most critcial issue I have with this is the pacing. It's excruciatingly slow and I mean excruciating, 13 moderately-sized chapters in, and all we had to show for it was a massive flashback and a bit of chit chat with an asshole AI. I'm not looking for the equivalent of a book written by Michael Bay, but for a dungeon-esque reincarnation novel (as a monster!), you'd think the pacing would be faster and more eventful.

To clarify, any time things of interest start becoming exciting, it is promptly interrupted. This only serves to make the pacing feel even worse. A good example is the introduction, it starts with the MC seemingly stuck in limbo (interesting) and then immediately goes into a massive flashback (boring). It would make far more literary sense, to divide the flashback up and spread it throughout her dungeon experience, perhaps as recollective dreams, or perhaps she could even gradually get her memories back piece by piece instead of in one massive block, so that it paced better, but no. Another example is that immediately after she hatches and is surrounded by snakes (interesting), the MC immediately launches into a massive conversation lasting a chapter or two (boring) and are discussing things that aren't pertinent to her present survival, which in and of itself, ironically, isn't discussed. It definitely suffers from the infodump 'tell not show' syndrome, where pretty much everything you could ever need or want to know is worked into the dialogue, even if it won't be relevant for another 200 chapters. Eugh.

Lastly, I dislike the MC and teacher's relationship dynamic, feels it like it'll continue to go in the direction of making the MC a perpetually idiotic buttmonkey while the teacher generally abuses her. I don't mind dark content, but I when the MC is literally stuck with gigantic asshole and since she seems to netiher be competent enough nor intelligent enough to do squat, it will easily become grating, especially in the long-run.

Heavily dislike the present rendition, but it could just be my taste.

Reviewed at: Rebirth? I want a Refund.

Up until this review (11 chapters) there is nothing really original, but no story is completely original. It reminded me a bit of a few japanese novels of the same genre.

I liked that there was no information dump until this point and it apears that it will no go very heavy in the LITRPG aspect, i know that tables and numbers are nice to give a measure of progress, but it sometimes interrupts the story to much.

I do hope this will not be one of those novel that but a non-human character that acts totaly human and ends up with a human form and identifying itselg as 100% human.

Reviewed at: Rebirth? I want a Refund.

There is to much words and not much meaning. 75% could be easily skipped with no consequence. That is the reason text reads slow. I suggest to concentrate wordcount on the most important points and to make MC's reflection appear more, then 3'rd person exposition.

Also I suggest pace changes, from Aurelia's perspective your characters dialogue much longer then it is because of her unspoken reactions.

And, yeah, teacher is a fucker. He knew what he did and purposely spurred conflict, then continued torment students in their next lives. It would be funny if an ass would be punished for his bitchiness, but he isn't, so it reads like encouragement. I can congradulate author, the guy is truly villainous, but to stand his presence you need to be masochist.