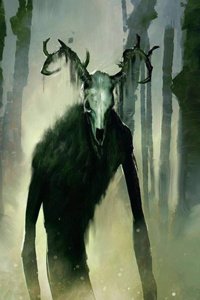 An old monster awakens in a new world, and he is very hungry.

I just wanted to say this is pretty much my first continuous story and I'm still experimenting and figuring things out.

I'm not really all that into horror. And by that I mean I can't even play video games like Subnautica or Dead Space because suspense is awful. That said, I do appreciate horror done well. And so far this is on a fairly interesting track.

The main character and overall setting puts me in mind of film Annhilation (a good thing) in the sheer... oddity of the descriptions. Significant body-horror even within the first few chapters combined with some very interesting vodoo-magic which I believe is appropriate for Wendigo mythology.

I was surprised to find the story quicky moves beyond the introduction of the MC and setting the style and scene for the type of horror and monster the story is revolving around. It quickly drops hints of a larger world setting, with significant potential plot discoveries.

Whether or not the story will benefit or suffer from moving into a larger-cast, more plot heavy story remains to be scene, and i'm a bit sceptical of the seemingly very 'human' underlying morality beneath the MC's more monsterous hunger and brutality, but the story is still in it's fledgling state and i'm curious to see where it goes from here.

A Story That Masters What It Does

I find this story interesting because it is an excellent example of a fiction which avoids certain aspects that are often cornerstones of most novels, web or otherwise, but does not really suffer for it.

Characters: At the current point, there is very little in the way of characters. Of course, characters are described and observed, and any of the characters whose point of view we are following act naturally and with full internal narration of their actions.

However, there is very little direct narration given to the interaction between characters. What other characters say is, often, paraphrased rather than quoted. Instead of showing the conversation directly, the narrator summarizes the overview of the interaction. This does not apply to every interaction, but seems more common than would be expected.

This makes a lot of the characters feel less like characters and more like parts of the environment.

Grammar: I cannot really say much here beyond the obvious. The grammar is not perfect, some mistakes showing up throughout. However, it is far above the point where it is comfortable to read. It’s all the sort of thing that enough careful combs through will spot and, unless you mind the occasional typo, you should not find it an obstacle to enjoyment.

Story: The story is clearly thought out, if sometimes erratic, and I am quite enjoying it. However, I think the author may be falling into the “I am following, so the reader will too” pitfall.

It is often tempting, especially when you are first writing into a narrative the complex and vivid world in your own mind to think that the reader can track what’s happening. After all, the author understands it and sees how everything that is being described shows the world clearly.

However, there are a lot of cases where something major about the world is shown in this story and the narrative immediately moves on to something else equally or more major. It makes it hard for the reader to fully connect with the last thing and pick up on the minutia.

There is also a lot of movement from place to place, making it hard to get a mental grasp on the last location and the things within it before it is abandoned. It makes understanding the world rather hard, without being able to orient to specific environments. For example:

The initial forest is the setting that than becomes the spirit world, which is immediately replaced by the Ten Human Headed Hydra base.

This is all logical, but feels like a rapid shift when reading. This is mostly a product of how unfamiliar the reader is with the world at this early stage, which makes it an extension of the first issue.

Based on what I have found to work, both for me and others, I would suggest assuming that you have both readers that are hyper aware and understanding everything you include and readers that are completely oblivious and need the story hammered into their heads. Include intricate world building and grand information for the attentive readers, and slow things down and sound them out, at least the minimum needed to follow along, for the ones who like being lead.

In reality, I think this works because every reader is a combination of both. Part of their brain enjoys the grand architecture, but another part wants to be able to lie back and enjoy the ride. Regardless, this is just what I have developed as an approach and understanding, and the author may have there own solutions or strategies.

Style: I honestly love the style, and don’t think style choices should be something a critical review should comment on. It’s like arguing over what kind of pizza tastes the best. You can determine individual preferences, and find which are most common.

But, in the end, it comes down to what different people prefer and is not a reason to say all pizza should be whatever flavor is most popular. As a result, I’ll leave it there.

Overall: I left this for last, and put all the others out of classical order, because I believe my explanation of the story overall only makes sense after having said what I’ve said above. I frankly really like this story.

It breaks lots of the normative rules for a novel, and could likely benefit from partially incorporating a few of them, even if it would loose some of its value from over incorporating them. However, the result is still quite enjoyable to read along with.

The protagonist has a distinct sense of ruthless pragmatism, being something monstrous and even sadistic, but has its own internal reasoning separate from normative human morality.

The world, although hard to follow at times, is enjoyable to experience and plays into the dark unnaturalness of black magic, making it seem familiar to the protagonist’s environment without loosing its twisted nature. This is impressive, since most attempts to show “dark” or “unnatural” magic from too close removes its wonderfully twisted feel.

As is expected from what sort of story it is, I think this will appeal to you as a reader if it’s themes are something you normally enjoy. It capitalizes on horror (and not the cheap kind), schadenfreude on the part of the protagonist and truly gruesome mythological creatures. If any of those sound of interest, and you are not hung up on the parts this story less lacks than seems to not bother with, I would recommend reading.

Loving it so far!

Really looking forward to continuing this one. Brings a rather unique protagonist to the table. Definitely curious what exactly he is, but i always appreciate a darker style of anti-hero that still makes sense in their own moral system. Monstrous definitely is an OP character out of the gate but so far it feels like a big fish in small pond with plenty of room for the story to grow around him.

minor grammar problems, such as missing letters and stuff, but they occur rarely and don't really interrupt the flow of the story.

The story is well thought out, but it could use a bit of fleshing out. This could just be because it is so action-packed, with little world-building so far. This was done at ch 35, and it might slow down considering the recent events, but besides that, there's practically nothing wrong with it as far as I'm concerned.

All in all, would definitely recommend it for any user.

(unless they don't like gore, and even then, it's just more a matter of fact, and not really a focus of the story.)

When I read the first few chapters, I thought to myself that I had found one of those hidden gems. You know, one of those web novels with a really intriguing premise. However, I realised that I had just misunderstood, and made assumptions about, the setting. Probably because of the synopsis. Originally, I thought that the main character was from a fictional earth (an earth with a hidden magical side- secret societies, magical creatures and so on) and had woken up in a different world. With the MC being one of those magical creatures. And while I know that the whole "transported to another world" genre is very overdone at this point, I felt as though (what I thought was) the setting, still managed to be unique and interesting.

However, in actuality, the MC is from a fictional world and (I'm guessing here) just

- something along those lines. Not that that is a terrible setting, it's just a little dull in comparison to what I hoped. But I was still interested. Because in the first few chapters, the author had set the scene for a horrifying monster that has retained its human intelligence, promising to use it to great effect in hunting, horrifying and, toying with, people.

But, as I read on, the plot started to become rushed and a little erratic. A hunt (the first one in fact) was dropped and hasn’t finished some 20 chapters later, so that the MC could do some crafting. Which happened too easily, too quickly. Mostly because the majority of it was solved with magic, which I didn't feel was quite right for a monster- you expect powerful magic, sure, but used to fuel its magical nature and innate abilities. Controlling it to perform magic and spells like a witch would, doesn't really mesh with what the MC is,

waving a wand around, casting spells. However, I did really like the idea of using rituals to preform magic, because I feel like that is a good workaround for a lack of control over your own magical power, letting the ritual be the controller and you, the power source. But the amount of things the MC did that I don’t think fit the idea of a Wendigo very well kept mounting. I realised this is because the Author is slowly pivoting away from that and into an OP, monstrous looking wizard. Which is not what the first few chapters promised and even duller because of it.