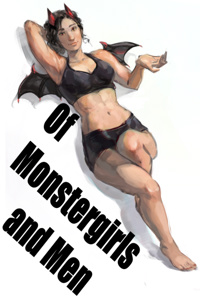 "I CHALLENGE YOU TO SALVAGE!"

"Check your fucking dex, twerp," the young woman hissed at the teenager. "You can't."

No sooner had she said this that the youngster fumbled to pull out his device and fiddle with the device's screen. Two seconds, and he let out a string of expletives that made you blink a bit in surprise before he motioned at the rather exasperated looking monstergirl to follow him as he rushed further down the road.

"He would've lost his monstergirl anyway," Tomas rolled his eyes.

You just rolled your eyes as you walked.

Having a road was a heck of a lot better than going through some woods and wondering if you were going to survive or not.

"I wonder when people will start to play with the salvage cooldown invulnerability," Kat whistled with a little chuckle.

"I wouldn't be surprised if there's more people doing it," You shrugged.

A long quiet followed, with only the sound of steps as everyone kept heading down the road. The moment was peaceful, almost enjoyable. At least until you heard a whistling sound. Several heads turned upwards to watch Rachel floating down, wings spread, angling herself to fall onto Tomas' arms and wrapping her own around his shoulders.

"Oh Master, it's time for lu~unch!" She proclaimed.

Her words made the young man flinch. "Now?" Tomas had to ask, looking slightly exasperated. "We still got some hours to walk. Can't it wait?"

"You know you could keep her in her pokeball, she wouldn't go hungry," Kat pointed out. "You're already keeping Freya."

"But feeding me costs nothing at all," Rachel pouted, her finger tracing the young man's chest. "If you're too tired... maybe I could ask someone else?"

Why was she looking at you as she said this?

"I can handle it," Tomas had proclaimed. "You guys walk ahead, ok?"

"Sure," Came the chorus of responses.

Not looking back, you heard the young man being dragged to the side of the road and behind the nearest bush. You glanced at Kat as she walked, her eyes sharp, her steps practically stomps, and her hands clenched into fists. It made you want to sigh as you just walked a little further ahead and put some extra distance.

"Think we should stop for a lunch break?"

"Oh, you're eating already," Rachel's voice purred in your ear, and it made you jump.

You'd not heard her approach; you'd not even felt her approach, and as you looked at her, floating right there, you realized she was currently floating. The Succubus smirked at your reaction, turning slightly and drifting to sit down on the grass, appearing greatly amused.

"On his way," she answered, looking at her hair before twirling it.

"Why aren't you keeping him safe?" Kat hissed.

"If there were ferals, I'd have felt their presence." The Succubus rolled her eyes before she looked over at you. "Why do you and the old man stick around these two? Are they kids from a friend of yours you owe a favour to or something?"

The change of subject caught you slightly by surprise, your eyes narrowed. You knew that just flat out lying or blocking her question would not lead anywhere. "I was their teacher, we just happened to have a common destination." The statement was dry as you stopped eating the chunk of bread you'd been attacking.

Rachel kept looking at you, no giggling bubbly happy fake smile but an expression of open curiosity. It didn't last, and she glanced over her shoulder just as you began to notice the panting noises. There was a certain young man running down the road in your direction. "Finally," Tomas groaned as he reached the group, pale, out of breath, collapsing onto the ground next to the group as you'd pulled out the food to eat. He was left gasping and groaning.

You took a bite of the piece of bread, releasing Diane from the pokeball. The nurse took a moment to look around and confirm the situation before spotting the young man and moving to his side. A touch to his temple followed a touch to his chest, her hands glowing slightly. "Only exhaustion."

"But nurse," Rachel pouted, tapping a finger against her lips. "He looks so pale, maybe he needs some rest?"

"Then I'll make extra sure to give my good Master all the loving he needs," Rachel let out a giggle that almost sounded believable, a flap of her wings making her float and land on the young man's lap. She slowly wriggled her rump.

You shared a look with Mr. Gabriel before he made a motion with his head.

"Yeah, I'm going ahead, always stick in groups and all that," you said out loud.

Diane was close behind as you gained some distance from Tomas' groans, again. You waited until you were well away before you glanced at your alpha. "Exhaustion?"

"It's exactly precisely solely exhaustion, Master," she replied. "But it seems she's doing her best to completely wring him dry."

You breathed in, feeling the tension in your back. "How long until you could claim that me stepping in is an issue pertaining to the group's safety?"

A pause as the nurse frowned a little. "Tonight."

"Mister Tomas is in enough of a condition that if a feral were to attack, one could successfully argue he'd be entirely unable to react adequately to save his own life," she replied. "Though... Mr. Gabriel would still be the biggest risk... hm..."

"We'll be in Grove town tomorrow, he should get a chance to catch his breath, but if this keeps up by the time we start moving again, I'll bring up the matter."

Your alpha nodded, keeping the pace as you reached the power-walking Kat and her huffy expression. "Slow down or you're going to leave your grandfather eating your dust."

"Rick," she spoke before groaning, looking exasperated and nodding. "Yeah, sure, you're right."

Quietly, you stood next to her, watching her working through a range of expressions before she glanced at Diane and then at you.

"I'm trying to get Coco and Liz to learn more words and to try and behave, it's not sticking very well." She made a face, though you were guessing all of this was just an attempt at distracting herself from the whole Tomas situation. "Coco just keeps harassing me whenever she can, and Liz doesn't stop her."

"They are both feral born..." You muttered. "It seems you might need a helping hand."

Diane nodded. "Yes, sir, having a domestic monstergirl to help lead the feral born ones is always best."

"I guess that makes sense," Kat nodded slowly before her nose scrunched up. "Then again, we don't have the money for a new monstergirl, so maybe I'll have to consider the whole salvage thing..."

"No need to rush this," came your reply. "We're currently a group, so if you need help, we can provide it."

"Your choice." You just shrugged, watching Mr. Gabriel as he approached, with Tessa walking at his side.

Looking further back, Tomas was clearly still trying to handle the infernal monstergirl currently rubbing herself against him.

"Let's just sit down and wait over here," you prompted, watching as a handful of people walked past your group and continued their way down the hill.

"Ok, it's time for the salvage rounds," you declared as the group began settling for the night. "Kat, you'll be the one left vulnerable tonight."

"Fine," she rolled her eyes. "Let's check the damn table." 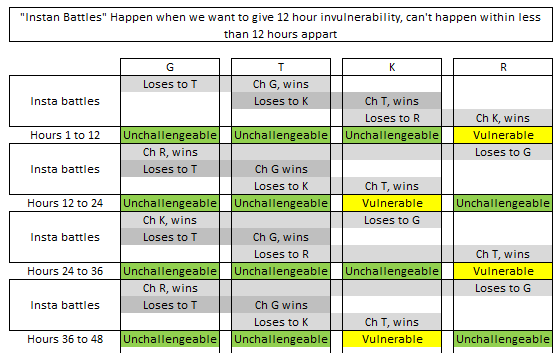 "Ok, so... me first," you muttered, grabbing a pokeball from your belt as you raised the dex to scan Mr. Gabriel. "I challenge you to salvage for that feral titmouse, and I bet a monstergirl of equal value, a feral Doggirl."

"I accept," he muttered with little energy.

"And I surrender." You tossed the ball at him. "Now you do Tomas."

He raised his dex, scanning Tomas. "I challenge you for that feral Doggirl you got, I bet my own feral Doggirl." "I accept."

"I guess that leaves me with Kat." He glanced at her, holding the pokeball as he scanned her. "I challenge you to salvage for the boobisaur, in exchange, I bet this feral Doggirl."

"And I surrender." He tossed her the pokeball.

"Everyone check your dexes?" You called out, glancing at your own. There was a twelve-hour timer under your name. "Confirmed."

"Sucks to be me, I guess," Kat shrugged. "Cute feral Doggirl though." She tossed the pokeball once before clipping it onto her belt.

"Well, that's done. How long until we reach the rest-stop?"

"It's not too far, just around the bend," Diane piped up, then squirmed as you looked at her a little surprised. "We were sent to Grove once or twice a year to help them with the festivities, and a couple of times I'd convince the girl transporting us to let me ride her rather than stay stuck in the pokeball all day."

That immediately made you grimace. "Sorry."

"It's ok, Master, you need to keep me balled to save on food."

A groan followed you. You really didn't like this whole 'it's to save food costs' thing. But whatever, you weren't going to keep them in their pokeballs during the night- too many people and too little desire to test your luck.

It didn't take long to reach the rest-stop. The place was a piece of land that had been flattened: about two city blocks in size, it was surrounded by a series of metal pipes with a solar panel on top, that gave off a faint buzzing sound that was rather annoying if you got close to them. monstergirls were patrolling the outer side of the perimeter.

Within the area itself, you could count no less than twelve tents and a couple of tamers that were on the younger looking side just "roughing it out" with bundled sweaters and a monstergirl on either side.

You had only one tent for the whole group, and tonight it'd be Kat's turn to use it since she was the one that was left "vulnerable" to salvage.

"Let's just find a spot and go to sleep," you muttered. "We've got the guard rotations noted already."

You'd been told repeatedly that the rest-stop was safe. It was closely monitored by more than just one or two of the people there and their monstergirls, but you definitely were not going to give up on making and keeping a habit of guard duty and a rotation. Last thing anyone needed was to end up back in the wilds without being used to it.

Pulling Monica out of the pokeball, ignoring how some eyes (and dexes) aimed your way, you moved to one of the clear spots large enough to accommodate the group and immediately went to pull the backpack off of Monica's shoulders. Retrieving a towel and some balled up pieces of cloth, you laid down. The day had felt long and exhausting, and more than anything, it felt exhausting in not just the physical way.

Your two monstergirls moved to cuddle against you on either side, Monica hugging you tightly, and Diane just looking at you with a little smile and kissing you.

The rough ground wasn't comfortable by any means, but you were too tired to really care.