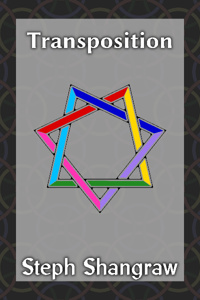 Please note: the Sexual Content tag is there due to a single brief plot-relevant scene, which has a warning at the beginning. For other details, read the full description below.

During a blackout, a frail and ragged old woman stops to ask for a glass of water from a backyard barbecue party. Given a good supper instead, she looks around the group, and tells them, "Be who and what you truly are."

Days later, seven of the people from the barbecue find themselves drawn into a trap laid by a pair of wizards and their accomplices, who kidnap them into a bubble reality.

All seven, who have known each other all their lives, are informed that they are not in fact entirely human: they have active fae blood, due to a series of conditions culminating with the blessing of the elderly fae woman.

The transformation into fae form comes as a shock: all seven, whether originally female or male, find themselves now unreasonably beautiful women. More urgent even than that, though, is their captivity. Getting back to the real world is a higher priority than this metamorphosis that rapidly begins to feel natural... but this is only the first step, as the diverse types of fae blood they carry begin to surface.

With no resources except themselves, how can they escape this prison? If they succeed, how can they possibly reclaim their lives? Just how many other faelings have been kidnapped, anyway, and what happened to them? And is there a way to make sure that their captors never put anyone else through this?

Back in the real world, Kayla, who learned long ago to trust her gut instincts, is absolutely certain that something is very wrong. The pattern in the list of missing friends is easy to spot, but makes no sense at all. Then a young woman turns up at the backyard gate who knows more than she should, and even though her explanation makes even less sense, every instinct tells Kayla that Riley is her only way to get them back. If they're not quite what they were, well, that's a bridge to cross later...

Just a little note: I'm a big believer in endings that are upbeat but not candy-coated, and not a fan of grim-and-gritty or of glamorized violence. These are adults in a difficult situation. However, no one gets raped, and the physical violence is, all things considered, fairly minimal. There is some harassment, sexual and otherwise, and also some mild restraint and mild verbal abuse. Complicating factors are generally wizardly or fae in nature.

If I need to warn you about gender in this being all over the map, some of it reality-based rather than fantasy-based, highly diverse sexuality, or that there is (especially later) some indirect fetish/BDSM imagery and honest character discussion, then you probably should just avoid everything I write. :-)

This is a story where characters are forced to learn who they are in less than ideal circumstances - and it turns out they are really not what they thought they were.

It's well written, the characters come across as people not tropes and their journey is fascinating as they find their fae blood transforming them while they are kept prisoner and drugged. How will they adapt to their new bodies? How will men feel now they are beautiful women - only to learn that is only the first step and they may end up not even looking human. Will their existing relationships survive? Can they be happy as what they are now?

I for one look forward to finding out more about the world they are in and what the future holds.

Addictive once you get into it

Transposition it the stroy of a handful of young adults finding out that they have fae heritage and having to deal with the resultant magical transformation of their bodies. Which would probably be a lot easier to do, if this didn't happen while they were being abducted for magical experimentation.

The style is a little all over the place at the start, but quickly becomes consistent. The early wandering sentences and overexplanations quickly settle into a smooth and detailed storytelling style, so don't give up early. It's worth it.

Grammar is fine. No jarring errors that interrupt the flow of the story.

The story itself is very generic, but in that 'this is the niche we're writing for and we're not going to waste your time pretending to be anything else' kind of way. You want to see a closeknit group of friends with diverse personalities get enslaved and undergo magical transformations and identity crises? Here you go. Here's an island, here's some magic/. The story isn't remotely complicated but it doesn't need to be.

The characters are definitely the star of the show here. A very large cast, all with diverse personalities. I found it a bit overwhelming, not having a very good memory, and the author does throw a lot of information at you about a lot of people long before you have any incentive to care about them, but stick with it -- it pays off. This is one of those stories where it's absolutely worth muscling through even if the start doesn't grab you.