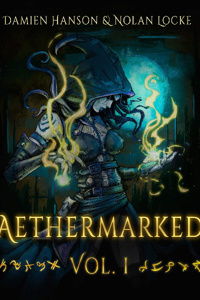 Friendless, broken by grief, tired of the real world, Jin-ee represents the perfect candidate for the new on-site 24/7 fully immersive VR sensation, Aethermarked.  Of course becoming Phallania Trevellian is more than she ever dreamed, and more than she asked for. From the moment she submerges into a vat of conductive nanogel and chooses her first spell, she’s captivated at the reality and wonder of the wide magical world around her, a new life so different from what she'd had in the real world.

That is, until the game refuses to let her out. Jin-ee has no choice but to become her character, and trust that the people behind the game are honestly trying to free her, rather than use her as a televised marketing sensation to drive up sales. As things turn dark, Phallania battles fiends and travels the world all while struggling not just to log out, but even to simply survive.

I marked it as 3 stars for a reason. Because I can see where the story is going, and I like tons of aspects about how your character and storylines are setup. The writing is incredibly well done as well. The problem I have, is you don't have a traumatic content warning.

Listen, I understand everyone has there own threshhold but seeing

A woman basically, tortured and mind raped to the point where she is so downtrodden and without hope that she betrays everything her current self and past self stands for. Then willingly submits to torture just for that brief hope she could survive. Not to mention the incredibly real scary moment, that they probably aren't doing alot to get her out of here. More than likely, they're just going to keep her here for entertainment.

When she's sitting in her cell and realizing that, she seriously contemplates suicide being a way out. That there would possibly be a chance that it'd wake her up or get her out of there, but she had no idea if it'd work. She actually weighs her chances, wondering if it'd be better that way if she'd just died. Having a friend of mine commit suicide this month, and going to his funeral this week, that hit.. hard.

Please in the future, mark this with a trauma warning.

--update--
Author has since added the tag. So I'll tack on another star :)

Reviewed at: Chapter 22 - The Deceptions of Governor Sibellus Arcturion

So, just a fast one. This is one of the new series that got my heart pumping, waiting for updates, and wishful thinking the author had a Patreon with some extra chaps, so amazing this is.


I do understand where some warning should be needed though, I didn't get it at the beginning, because it is a good happy to read inversion Game Lit RPG, but later it gets a bit ... scarier. But not enough that that is the reason you shouldn't read! Because it continues interesting as hell and the author does a really amazing job at it.