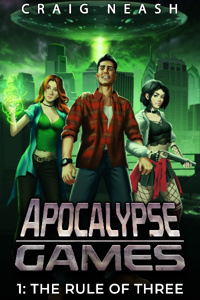 Apocalypse Games - The Rule of Three

It was a busted date. Not my first.

Then the world ended.

Quite the leap, I know.

Thing is, I wasn’t that into her, and what happened after was way, way, cooler.

At first, it was horrifying…

This story has swearing, sex, gore, and violence. It has statistics and a mild amount of cultivation. It’s written in UK English, so has a whole bunch of Us where they’re not supposed to be. It has the odd S where you’d expect to find a Z. Don’t stress about it. Relax. Take a breath. You can power through.

Updates every other day.

heres my take on the first 22 chapters. first few chapters are pretty good then it started getting weird with how fast the animal's start devolping intellegence and how much faster they take in mana, kinda went down hill in enjoyment from there.

while this novel wasn't for me doesnt mean someone else might enjoy it more.

British MC with a Quasi-System, Post-Apocalypse

The world is suddenly flooded with mana, lots of people die, and everyone and everything that survives changes with the introduction of mana and the consequent shift in the world order. This story takes a slightly different twist on this subgenre by being based in Britain with a British MC and slang, and more importantly to the story, a slightly different system. Instead of an all-powerful System that controls the workings of the universe and abilities, Pegasus (the MC) has a neural interface that helps him manipulate and use mana through the interface of a wuxia/xianxia cultivation game series that he used to play pre-mana apocalypse. It doesn’t come with any tooltips or help functions so he has to try and figure out how to use this quasi-system on his own. While trying to survive and figure out what is going on (in that order).

This story is quite engaging. It’s written in a different, somewhat irreverent style with several humorous moments. The worldbuilding is an interesting version of real-world England dialled up to eleven because of the unexpected introduction of mana to the world and the sudden and massive loss of human life and social order. Pegasus starts off alone but later finds other surviving humans that he teams up with.

The characters are interesting and have some depth. Especially the three main characters. The other characters are only bit players at the moment, but it is understandable, given that they have only recently been introduced to the story.

There are some aspects of this story that some people might find issue with (mostly gleaned from what I read in the comments section). Firstly, note that this story has a harem tag and it is there for a reason. Secondly, as noted before, the dialogue is written by a British person and may not be easily accessible to everyone. Besides some slightly different phrasings there are also a few British terms, such as ‘sod’s, ‘shite’s ‘Cumberlands’, ‘hoops’ (Spaghetti Hoops, not the basketball kind), and ‘cigs’ thrown about. And the only alcohol they have appears to be JD. I quite like it, but some other people might find it makes the story slightly harder to follow and understand. Thirdly, and this is even more minor, some people might be surprised to find out that British people do also use the Imperial system for things like miles, feet and inches. Some road signs are in miles and speed limit signs are in mph. Don’t really know why but guessing it is at least partially because they have been using those units for a while and people don’t tend to like to change. The chapters are also quite short, but that is even more of a nit-pick than anything else.

Anyways, while I included the above paragraph to be more comprehensive, I quite like this story and have read all the available chapters. If you also don’t mind any of the items mentioned above and like post-apocalyptic fiction, I recommend you give this story a try.

PS: As officially required for an advanced review, some details on the spelling and grammar: it is good. There are a few errors, but most of them seem to have been found and mentioned in the comments and corrected by the author. Being willing to read and act on these comments meant I gave the book an extra star on the style score. Hope this helps.

Review initially written when Chapter 29 was the latest chapter. It is still quite new, so I will update this review as more chapters are uploaded.

Good from what I read, but short-ish chapters

Not a whole lot of the story has been written yet, but it looks promising. Unfortunately, I got mildly iritated by the ~1000 word or less chapters, with some of that taken up by system screens, making it feel like I was constanly clicking the next chapter button. Will add to read later and possibly revisit later.

The premise is solid. The apocalypse occurs, and due to the existence of a neuro-virtual reality our entrepid MC gets the new apocalyptic reality filtered through the lens of the video game he was so eager to play before he almost bit the dirt. It's odd, quirky, fun and pretty believable. The information is consistent and the blur of 'cultivation' (which has been hardly touched on) and the post-apocalypse of the modern world seems to be shaping up to be truly interesting!

The vast majority of the story so far revolves around ol' Peg's desperate attempts to survive this new (extremely horrific) world. This involves lots of running, desperate encounters with furry fiends, and intense emotional strain. All three of these points are played out in fairly even shpeil, and the pace is held at a high, but steady pace.

The introduction of the two female friends in the cover photo, Amy and Tasha, adds much needed character interaction. It also allows the author to showcase his surprisingly adept dialogue and some actually gripping emotional moments.

TLDR: I really like everything i've been given and want more. Quickly. So far this has not dropped the ball for me in any major area of story-telling. A few nit-picks are always possible but as far as anything relevant for a review they're not worth mentioning.

So give it a try!

Only six chapters out, but so far, this seems promising.

Solid English and a smooth writing style make for an easy read. The chapters could be a bit longer (personally I prefer fewer long chapters to many short ones) but I'll see how this goes over time.

Post apocalyptic setting, which I personally enjoy, starting right after hell rains down on the MCs world. MC wakes up to find himself back in his own world, with game features (indluding underlying calculation) for what seems to be a cultivation based story and a system to help him figure out, how some of his changed world works.

All in all: Promsing start! It will be interesting to see how this continues.

Getting a real Cataclysm DDA vibe from this story.

I always enjoy a good apocalypse story, especially the frantic first hours of looting and running for your life. Agro3 has that. It's very actiony and visceral. The mc is always injuring himself, running, falling off things, puking, and getting bounced around like a pingpong ball.

The pacing matches the action. It doesn't spend too much time dwelling on things, but it does have a high level of detail and sharp focus. It feels a lot like the script for a movie or show.

The mc's 1stppov voice really holds it all together. Maybe everybody in Britain talks like this, I don't know, but it feels distinctive to Midwesterner like me.

The litrpg aspect is the weakest link. Not that bad, but not really necessary. It could be cut out and work better as a straight scifi. The system is sorta shaky. It's just a game implant that can interpret alien mana, but then the alien mana also mimics a vr game -- except when it doesn't.

The two companions are introduced at the same time. That makes them harder to keep straight. They needed different voices or really obvious characteristics.

Recommended for now. But all apocalyptic stories have to jump a high hurdle when they transition to post apocalyptic stories. The cast expands, enemy factions show up, the mc changes from clueless everyman to hardened bad ass, and the excitement of the first few hours fades away. I'm interested to see what happens.

Interesting story and I've enjoyed it so far. I recommend giving it a read if you like apocalypse stories and the level mechanics are different. Looking forward to see where the story goes.  Doesn't seem like over the top sexual content thus far. The story flows well and I like the characters.