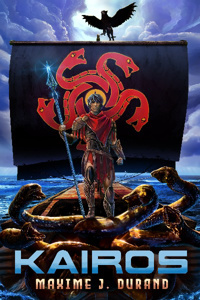 This is the latest tasty book from RR's prolific writer Voidhearld. I've done the cover art for this book, so I am ahead of the current chapter post curve, along with other readers on Void herald's patreon [which is now at 19 chapters].

In this book Void takes on an entirely new setting - a world where the Greek gods have been smitten from Olympus and where heroes rule the ocean, after the world has been flooded.

The Legend of Kairos holds much greek-pirate themed hijinks, along with fighting monsters and using monsters to fight, tied together with a Litrpg system.

The protagonist of this series simply wants to make his homeland a better place and he is willing to resort to piracy for this goal. Unlike other adventurers of the sea who rely on strength or speed he uses a rare class perk - talking to animals to his advantage. Using his wits, in a brain not brawns scenario, he befriends monsters and uses their skills to aid his own. He utilizes hydra's venom to poison arrows and spears [which allows him to defeat foes much stronger than himself] and has an adorable, smol pet griffin. The longer the series goes on, the deeper the interactions become between Kairos and his animals which is a wonderfully solid premise.

The spelling and grammar here is simply superb, as per usual for Voidherald and the narrative style is a delight, as void as a pro at sprinkling comedy and weaving tragedy into his tales of interest.

True to his namesake, Kairos, the MC is given a brief window of opportunity that he is compelled to take. In Kairos’ world, the ancient Gods have been overthrown, with men and demihumans striving to gain power and skill ranks through combat and slaughter. Tragedy has pushed young Kairos to the sea. Leveraging a unique ability to communicate with animals and fantastic beasts alike, he carves out a place for himself.

Chapter 1 has the precision of a short story in itself, a brief setting the scene, building up to high conflict midway and a teaser-yet-satisfactory resolution by its end. The language is succinct and mostly error-free.

*Update: Read till chapter 22. Still good. The story is progressing well. I really like the characters that the author has introduced. The MC and those around him have sufficient depth and act consistently in line with their personalities and purpose. Expect more interesting ones as the MC continues to recruit his pirate crew. Chapter 9 delves deeper into the history of events that explains the significance of the sea in this world.

Reviewed at: 16: Wolves of the Sea

A young man (Kairos) seeks to improve his homeland by growing stronger and gaining more resources. Even if it means using piracy. The main character is not above taking part in missions to kill people that he has no personal grudge against. But he is also not a bloodthirsty maniac or berserker who finds pleasure in the act of killing itself. He just has a goal in regards to his homeland and himself, a goal that he is willing to take the necessary steps to achieve. Not just solely through force of arms, but also cunning stratagems and other less violent means. For he is not a [Fighter], but a [Rogue] in a world where men have overthrown the old gods, monsters roam, and there is a system with abilities, skill points, classes, experience points. Where the ambitious are able to rise from [Commons] to become [Elites], [Heroes], [Demigods] or even [Gods] themselves. Kairos has animal companions, is part of a pirate crew, and has an ambition of his own coupled with the will and drive to make it a reality.

There are only 16 chapters so far, but even the side characters are interesting and include humans and creatures from Greek myths. The very first sentence introduces Kairos’ griffin companion, there is a Minotaur in the ship’s crew, and (as Kairos has the rare [Beast Tongue] skill) he interacts with a fair number of myth-inspired creatures. The writing style is clear and engaging and the plot pace does not feel slow or meandering but always steadily and quickly progressing. The spelling and grammar are also generally very good. There are very rarely a few minor errors, but most of them seem to have been found and mentioned in the comments and corrected by the author.

It is still very new, so I will update this review as more chapters come in. Though it only has a few chapters written so far, it is an excellent story for anyone wanting to start a new story by an author who has a track record of writing popular and enjoyable stories on this site. And for completing books that he starts.

As a Greek I can say I enjoy this! It is a fast passed story based on Greek legends and myths. It takes parts of well known legends and offers modern story with an excellent system and well thought progression. Each chapter a story on its own and conclusions arriving swifter than expected are what this story is all about and all this without losing the initial draw. Look I am not good with reviews if you are looking for a system, ship-management, Kingdom-building light, raids and pillaging Greco-Roman style and dudes hanging dong(casually), fast paced action this is it.

Void did amazing on this book. The story progresses smoothly and the grammar was on point. One problem I noticed is that the MC is a little too casual about death scenes. Like in the beginning when his uncle died(Although his uncle was being a little hot-headed), the MC only said a few words and a couple of tears dropped, but thats it. But it was amazing overall. Will continue reading this book. Cheers

Reviewed at: 3: The Quest

He's back. The first chapter is missing some of his characteristic humour but is made up for with pretty good characterisation and worldbuilding for the pleasure of the reader. The world is pretty much using the LitRPG structure that he always uses in a demi-historical/mythological version of the Ancient Hellenic Isles; you see the use of some historical hellenic regions such as Thessaly and other places I've never heard of before such as Travia. Not sure what exact time period in ancient Greece it's based on but it's probably before Roman occupation. We'll have to wait until we see what state Athens or Sparta is in to determine if it's set around the period of the Peloponnesian War or the Athenian League.

4.5 stars for grammar because the first three sentences of the first chapter are a bit clunky and don't flow very smoothly. Didn't notice any problems outside of that.

Theme-wise, one aspect that is not discussed in the blurb is that the MC will be communicating and taming beasts in a setting in which this is uncommonly done. Mythological races such as minotaurs (and I assume satyrs and such) will exist in the normal world albeit being less common than humans (I'm making this assumption based on one character thus far.)

Why are you here?

Scroll up and click the start reading button. It's Void Herald, what do you think the quality is going to be? Author of multiple, MULTIPLE, top 10 best rated stories at the time of review. The number grows if you include top 100 stories. As far as I am aware, no incomplete stories. Very little risk of this story getting dropped. This story seems to keep the trend of great writing.

The system and characters are interesting. The first chapter already hinting at deeper character traits. I'm not sure how much of the lore and world is taken from ancient Greek mythology, I was never that interested in the subject. It includes things such as Olympus, Hydras, Griffins, hoplites, and more- if that gives you sense of the setting. Nevertheless, the author does a great job setting the world and tone of the story, assuming it continues as is.

I dropped a star on story score because the first scene that, arguably, feels like it should be emotional, just doesn't deliver for me. There wasn't enough build up to create an impactful moment. I understand the want for action in the first chapter, but I think a slower start could have helped. Something like starting before the boat instead of already on the boat. That is, however, personal preference.

I just liked the first chapter..let's see where it goes. I have never read books from this author before but I have heard good things. It starts with little context before as we don't know info on the main character until he gets ranked up. I don't understand the ranks yet but they are regular litrpg ranks. I am looking forward to this being an interesting read

It is a serious Void

This review comes from chapter 15 (read ahead on Void's patreon).

Void has been on RoyalRoadl for a while. This time the story is set in what appears to be ancient greece. The vibe of the story is closer to his book Never Die Twice than Vainqueur the Dragon or The Perfect Run.

The story follows a young  ambitious pirate called Kairos, who wants to change the pirate colony for the better and make them as strong as the other nations if not stronger.

There is a slight litrpg aspect to the story. A part of it is a questing system, which is nicely interwoven to the mythical setting.

It seems that almost every main character in the story is affected by the story's serious nature. A lot of the main characters have their own ambition, which drives them forward. Those that do not seem to hide a secret or two. It also seems that the story will not discard characters easily as Kairos has reasons to help them increase their powers.

So as of this review I have only read up to chapter 14 (the last free chapter), but I want to go ahead and give this a tentative 5 stars. Really love the way that the story is progressing and the main character has all the qualities of a loveable rogue. He is a pirate for sure, and does raid other people, but has just enough redeeming qualities that you can't help but root for this guy. Check it out even if you don't typically like LITRPGs, you may just be in for a surprise.