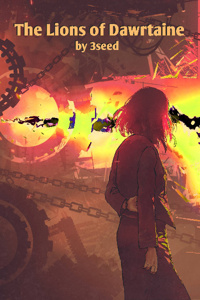 Hallon Nilsdotter was born in 1268 and trained in the magics of the shamans of old Sweden. Now, in 1924, she hunts for the Calamity, a prophesied disaster. Along with her spirit allies and the young scientist Milo Rabbit, Hallon forces open a tear in the boundary of their universe to travel to another.

An old war has ruined this land, breaking its weather systems, and a new war is brewing between the Untainted and those who show strange mutations. On the run after being identified as abnormal, Hallon and Milo must navigate this new world of machine guns, gas attacks, and fallen spirits. All the while, the Calamity looms over them.

Please note that the genre is a mix of fantasy, science fiction, and supernatural. The technology level is about the same as World War I with a heavy dash of mad science. Also, while one of the characters can see numbers (math synesthesia), this novel is not LitRPG.

Reviewed at: 8. The Cave

Alright, so I haven’t written a review before for RR.  So here’s a first.  We’re also only 8 chapters in, so I may have to update this down the line.  Based on what I’ve seen thus far though, and based on my past experience with reading the author’s work, here’s what I’ve seen and what I’m expecting.

First thing I want to start with is that the author already has one fiction up on RR.  It didn’t stop midway or on a cliffhanger or when things started getting difficult. It reached a satisfying conclusion.  Now, from what I understand, there’s more to come eventually, but even if the author abandoned it there, you’re not left hanging.  So if you invest in this one, you shouldn’t have to worry about the author just bugging out sometime.  The author seems to be in it for the long haul and that’s both good and unusual for RR.

Update length/frequency:  Updates thus far have been more frequent than the last fiction, though I wouldn’t be surprised if that tapered off a bit as it got traction.  Last fiction was an update once a week, this one thus far seems to be 2 or 3 times a week right now right now, but again, that might taper off.  That being said, the updates were always regular.  Once a posting schedule gets decided, the author at least in the past has stuck to it quite faithfully, again, unlike the majority of fictions on RR.  Updates were around 3k words based on the last chapter I checked and use spelling and grammar a hell of a lot better than mine.  Dialog is usually well done.

Pacing:  So far this one is looking like a faster paced story than the author’s last tale, though that might scale back a bit.  Last story was a bit of a slow burn compared to some of the other stories you might be used to reading.  It’s not going to be a nonstop adrenaline ride, the author takes their time to build the world/characters.

Alright, by now, assuming you’re still reading this review, you’ve got to be saying to yourself, “cool beans, but what do I have to look forward to with the actual story?”  Well, here’s my thoughts.  Story so far seems to be holding pretty close to the synopsis, though I’d argue that the synopsis doesn’t do the story justice.

The characters are alive.  They’re not just cardboard cutouts of generic fantasy power characters.  I’m looking forward to seeing them develop and watching them interact with each other.

The setting is vivid.  The author both in the past and it’s looking like here, has created world(s) in and of themselves which you can see.

Magic system looks to be fluid rather than crunchy.  You’re probably not going to get a specific breakdown on exactly how everything works, but probably no asspulls either.  It’s also not the main focus of the story, but rather a mechanism for furthering it.

If there’s one negative I could speak to thus far, it would be the use of the word gloop.  It’s just such a silly sounding word for what looks to be an important class/distinction.  Either way though, I look forward to seeing how this story goes and I’ll update this review if ever I lose interest in the tale.  But so far I’m not seeing that happen.

Grammar:  5*.  I’m not overly grammar concerned, but I haven’t noticed any issues in reading this.  It flows.  And in the past when people have noticed errors, the author has taken the time to update them.  But the issues I’ve noticed have been few and far between in the past and I thus far haven’t noticed any in this work.  But then, grammar isn’t necessarily my strongest suit.

Style:  5*.  Plain and simple, I like how this author writes.  It’s got a flair to it, and while I’m not sure how much the author researches or incorporates various mythologies and the like in their writing, it at least feels like they’re weaving a story, rather than just starting from a blank background.

Characters:  I’m giving this one a 4* so far.  I like Hallon and Milo and feel that they’re engaging thus far.  And being the main characters that’s good.  But at only this far in, they’re really the only characters we’ve learned much of anything about.  Supporting characters are a lot more ephemeral, and we really haven’t seen any antagonists yet other than a couple of fairly faceless soldiers.  So we’ll see.  This one could go higher or lower as time goes by.

Story:  I’m giving this one a 4* as well, though as time passes that could change, seeing as how we haven’t seen much of the story yet.  This one, much like the characters, is open to shifting depending on how it goes, but we’ve at least seen the main characters meet and the story has a direction, though we haven’t seen much yet.  I’ll caution though that it’s likely going to be a while though before we get too deep into the story.  My guess is it’s going to be at least a bit of a slow burn as the author gives the characters/ world time to develop.

This is another fantastic yarn written by an author who knows how to create deep worlds and realistic characters. I was a loyal reader of the previous RR fiction, and now will be regularly reading this story.

If you enjoy a story that builds on the initial premise in a way that flows and is believable within the constructed world, and you enjoy characters that seem to come alive as they struggle though the plot, then this is for you.

My expectations for this story as a reader coming directly from the authors last story here on RR, might actually be a little bit skewed. I was expecting a bit of a slow build and pacing, as that is what we got when learning about the world Eight experienced as a newly incarnated child. So far, however, the pacing and action content in the first few chapters here is faster and more diverse, and I am enjoying the change immensely.

The writing style is a much appreciated change of pace from the standard amateur RR level you would expect. This composition is polished, and at times even poetic. I find each scene fluidly flows into the one that follows.

Give this story and the author's other works a try, you will not be disappointed.

This book is very good! I love all of the historoical details. Also like the parallel universe idea. I like how you provide details on the characters and the world in which they interact. It allows me to  create a picture of it in my mind. I just finished chapter 2 and look forward to reading more.