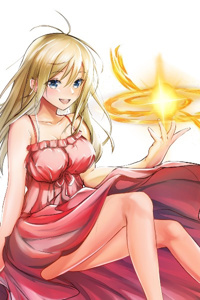 Reborn to Rescue a Video Game World! After dying during a worldwide pandemic, ordinary college student Asteria was given a fresh start in the world of a popular video game. Her mission: to protect mankind from a forgotten danger. However, shouldn’t the original main character of “Tales of Vesterland” be given his chance to shine? Now, armed with ALL the cheats, she’s decided to let the hero do his thing while she saves the last boss and gets rid of the real villain who’s been hiding behind the scenes. Join this OP adventurer in her hilarious candy-fueled quest to befriend the hero, save the villains, and kick ass!

Also starring: Sariel. He thinks he's hot stuff because has it all - looks, superhuman abilities, and a great fashion sense. Too bad that the process that gave him superpowers has a secret side effect...

This is a very entertaining read so far. There's some truly outrageous comedy in there that makes it more than worth it. The tone is generally lighthearted. The start however, is rather darker, which I feel fits a bit poorly with the rest (it was when I read it, it has since been edited).

MC is overpowered only in potential and blessings. Her combat rating is not high. Quite the opposite. It's an odd setup, but it makes her quest to save the world all the more interesting.

Not bad, not bad at all

Certainly not the best of the best, but it deserves a higher rating at least. If you ignore the generic title and move through the first few chapters you'll find a delightful little story. It has yet to build up to anything, but what we have seen up to now should be sufficient to get an impression at least.

The grammar is pretty flawless, with rare mistakes.

The characters are well built up, all clearly defined and with colorful personalities, the interactions also seem quite promising.

The style is also quite nice, even though it is a bit more free than some other novels the MC for example being a bit more on the normal person side. Like, not the typical light-novel reactions you would expect from the title.

The story, other than the characters, seems the most promising currently even though we only have a tiny piece of the puzzle hopefully the story will accompany the rest of the novel complementarily. After all we are still at the beginning and it will take a while to see how the story will progress.

Another nice thing would be the humour, gave me quite a few chuckles, so the comedy tag checks out at least.

The story also plays in a more advanced isekai world different than the usually used medieval world, the technological advance being in the 1970s.

All in all quite a nice story and a good read, with great prospects, with time this story hopefully will stay active and popular on this site.

So much Fun to Read! (Great Slice of Life)

Reviewed at: Chapter 27 – Take this knife

I am really enjoying this story. It has so many hilarious elements. Mostly I enjoy it because it is has a light hearted style. I really enjoy slice of life stories and this one is such a great example of them.

Characters are well rounded, and progress with the story. There are no big info-dumps. I find the main character relatable in the way she was a normal person in her life before, so jumping straight into battle is definitly not on her agenda. (Her OPness is rounded out by her fitness level and experience)

I would like to better understand the training she did go through in some more detail once the story is more complete because her full powers have not been explained yet.

A breath of fresh air, this story has times it made me laugh, and times that made me eagerly read on for what would happen next. The MC is a funny and enjoyable character, rather than a Mary Sue Perfect type. I honestly groaned out loud when I caught up to the last posted chapter. I wait for future updates with great anticipation!