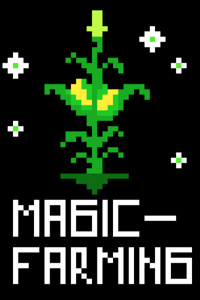 A thought experiment gone out of control, inspired by kosnik4's popular story, Magic-Smithing.

What would life be like for someone else who was transported to the world inside Magic-Smithing? Someone who wasn't as prone to encounter incresasingly dangerous people, whose life was a little less chaotic?

What if this person was content with a simple life of farming? Tending to the plants, sowing seeds, and reaping a great harvest at the end of the year.

Of course, he's also a data scientist, so he can't help but squeeze out the maximum possible efficiency of his time and the potential of his attributes. Who doesn't make excel spreadsheets in their spare time?

This is a slightly more "Slice of Life" esque version of kosnik4's story. Hopefully lighthearted, funny, and as enjoyable to read as it is thinking of increasingly ridiculous skill progressions. Thanks to kosnik4 and Magic-Smithing for providing fertile grounds for creativity to thrive.

NOTE: THIS IS A FAN FICTION, AND ALL INTELLECTUAL RIGHTS BELONG TO KOSNIK4.

I'm a patron of his story, and love reading about what happens next in his story. I've tried my best to be as accurate to his canon science as possible, though it's not 100% feasible. Afterall, the story isn't even done yet!

My plan for the releases is to release a single chapter a day until 3/7, and then release 4 chapters a week on M, W, F, & Sat.

P.S. If anyone can figure out what the EXACT formula for Level XP is, I'd love to hear it. I'm starting to doubt my math and excel capabilities. I have an equation that is fairly accurate and stays close to his values, but not exactly the same.

So far from what i've read the book seems though out, but there are many problems. The best way to describe it is with other characters. Very quickly it seems like the author just copies the main character's character onto the other characters. The grampa for intsance has no personality until in the most recent chapter, and it is mostly a copy from the main character.The MC is the only driving force it seams. Every event in the story is caused by them. Next and aruguable the worst is how the story is presented. Take for instance the scene we are told about with the merchants, we are TOLD about the entire encounter. This simple fact alone makes it hard to sympathize with the character and his fear of mind control. Another small nitpick is the paroting back and forth of information. This happens earlly on for entirely too long about his bathroom habits. What I would suggest doing to improve the quality is to go through the entire book and treet everything so far like a rough draft. When you do go through it have a read through and rewrite it without tye older chapter as a reference ( it helps a lot). Besides thoses the story kept me midely entertained and i didn't catch any grammer mistakes because I suck with grammer. All in all I feel you should just spend more time fleshing out the chapters with more motion from whats happening instead of descriptions of what already happened.

Should be titled Magic Burger

The story up through chapter 7 is practically exposition. Very little farming, let alone magice farming, no explanation of how he figured out how to do magical farming. Them BAM chapter 8 is super descriptive about a fecking burger.No knock on chapter 8, I'm peeved that the best chapter so far has been about the dude making a damn burger I wish the farming aspect had even half as much quality put into as that one burger making seen had.

No farming no plot

The story so far is a long instrospection by the MC pondering about stats and skills while telling us a summary of his past deeds and gains, but most deeds are training routines.

No meaningful happenings or interactions with other ppl in those 18 years were shown aside from some bantering with his Grandpa.

Nothing happens. There's no plot.

Maybe it gets better latter but the start is quite rough and fails to hook unless you really like the litrpg aspect which is the only thing moving.

Slice of life at its best, takes the system/world of another story and adds his own tale to the mix. I do miss some of the training montages tho 😁. And very much like the authors note of this being a story about a guy on a farm. Looking forward to more of this story

Without even comparing it to magic smithing its great, i love chill no drama story's like this and am always looking for new one's.

This entire site has a problem with stressful novels, i can't even imagine being in these positions and am constantly anticipating every single thing to go wrong and being right half the time!

I need to know what happens to gramps

Your writing is solid and I hope the folks who are salty about you going MIA don't get you down! (But also pls come back)

Author gave up on it?

Writing style is enjoyable and the characters, only a few at this point, are interesting. But...

I will echo another reviewer and mention that if you are expecting crafting heavy (yes i am including farming in that catagory) sceens in this story you will be disapointed.  His magic farming skill happens entirely off screen during a long time skip. Time skips make sense for a reborn scenario but the namesake skill of the novel should happen on screen.

Length.  The last updated chapter was middle of last month.  I know it's hard to do but people should really have a good portion of the story written before they post the first chapter.  Being left high and dry with a story is always frustrating.  If you stop the story short without even a temporary ending then I ussualy subtract at least 1 star.

That said its a real pity.  the authors writting was quite enjoyable and the story had potential.

Its as good as magic-smithing. It has its own nice quirks. Is well written  and enjoyable to read. And the idea is also done very well. I also find how he calculates and makes training etc done very well and was very enjoyable. Now the only question is how long this novel will last....

A few days ago the 5 stars reviews were on top, now the 2-3 stars are. Readers are salty the author doesn't update.

It's decent. It's an attempted mix between a farming slice of life fic and magic smithing. Unfortunately beware of chicken exists and this fic is not close to competing in the farm category.

However, magic smithing has been going downhill for a long time so this is a nice substitute. For now it's just jerking about on stats and whatnot, but there are attempts on a feel good atmosphere which made me smile. Not worth if your time if author doesn't update and the chp count keeps at 9.

Better than the original

Better than the original, imo.

I dropped the original at around the same age of MC. I am however looking forward to reading more of this one.

Where in the prototype novel the events basically contorted themselves to coincide for the heroine's benefit, this book has more natural feel and flow. The interpersonal interaction is also done much livelier, where in the other book it was cringeworthy at best.