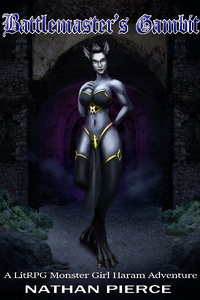 Andric had just died a mundane death and awoken in a strange void surrounded by messages from the gods.  You would think that he would be happy to discover that he is in a universe with game-like rules, but due to his class, it's a special kind of game.  It's one of those crappy Gacha phone games...or is it.

This is a Lit RPG monster girl harem fantasy. There is cursing, gore, and explicit sex.  Please do not read if anything about these topics offends you.

Thanks for taking a look, and let me know what you think!

Monster Girl Battle Harem in a World of Adventure

I'll go ahead and confess that I'm neutral to litrpg stories. If an author manages to work the system well into the story, then it's just the same as any other worldbuilding choice to me. In this case, the author does a very good job of having the stats be reflected in the nicely descriptive battle scenes. Beyond that, the spending of experience points is crucial enough that any reader will be paying attention to it. In other words, this succeeds in making its stats compelling even for somebody who prefers such numbers be supportive framework to the story's narrative.

Given I don't seek out litrpg stories, I'll go ahead and explain I sought this out as a monster girl story. I almost missed it when I searched 'monster girl' in the search bar, but then found it when I tried searching 'monstergirl'. As a fan of monster girl stories, this was everything I wanted. Loving detail is put into describing the inhuman yet attractive appearances of the monster girls- yet without turning into purple prose.

Of the 5 chapters out, only one of them has a bit of an awkward flow. The first chapter in which the protagonist is dead, and all the action is him thinking to himself in his head, feels a bit off. That first chapter is the only reason I gave the style section 4.5 stars instead of 5. By the time actual action and character interaction occurs, that feeling of being off is gone. The following chapters more than make up for the first in terms of style. I was tempted to give the style section 5 stars because they were the norm, but decided that a first chapter is too important to completely ignore.

This story is quite readable, and usually grammatically correct, but it does have the occassional grammar mistake. A particularly bad example is highlighted by the last phrase of chapter 1: "and I felt a sever sense of vertigo before losing conscious." This phrase should be a 'severe' sense, rather than a 'sever' sense, and should be losing 'consciousness' rather than 'conscious'. Still, I must emphasize that such clusters of mistakes are rare. The only reason I pointed out this abnormally bad one was to explain by way of example why the grammar section only had 4 stars.

For all that many elements of the story are cliches, the author manages to make it work as he writes an interesting narrative. It's a basic story of somebody getting isekaid into a medieval fantasy video game world and gaining a harem. Because it remains mostly cliched by the point it reaches chapter 5, I felt like I should dock half a star- but because it writes those cliches so well, I couldn't possibly dock any more. There is a wonderfully balanced mix of action, character interaction, subtle worldbuilding, and exposition. For all that some points of the story should by all rights feel like clunky exposition dumps, they don't. Examining those sections further, I think it's because the author writes emotion into those few scenes very well.

The characters are well-written, from what little I have seen of them. So far, we have three prominent characters: the protagonist, and the first two monster girls. The protagonist reacts believably for somebody with his gaming/military background, and also acts consistently as the nuances of his character are revealed. Given we can't be sure what the two monster girls are thinking, we don't have as much insight on them, but their different personalities shine through via their actions. A common trait for both of them is a submissive streak and a flirtatious attitude for their new 'master'. At first I had assumed it was inhuman psychology due to being weapons. However,

the story starts to hint that this behavior may be due to a fear of being returned to a sort of void-like, isolated state if their master discards them. Beyond that, it is revealed that these monster girls were people who had died before choosing to become weapons, and full-fledged backstories are hinted at for both of them.

Overall, enough thought and subtle nuance has been put into the characters that they deserve a full 5 stars.

Battle master's gambit is a litrpg alright. The stats are well developed, so stats geeks it can be a fun read. I'm not much of a fan of too many stats, but that my personal taste.
As for the Harem, it is pretty classic and furthermore highlighted by the fact that the girls are... well literally items. They have their own personality which is nice. But they are totally submissive.
The storytelling so far is a bit slow for me. I think there is too much exposition on the first and second chapters. The third and fourth pick up the pace. But still, it can be hard to read the first chaps. I would advise clearing the huge ass paragraphs of tens of lines. It did not encourage me to read through them and seriously I did not lose my understanding of the story. Anyway, the flow can be improved.

I personally can't judge the story in itself as there are too few chapters. It seems okay, but nothing out of the ordinary, for now at least.

Grammarwise there a few tweaks and beans, but nothing major. Another edit should do the trick to correct those.

Anyway, I think these series got potential. Just gotta work on the pace of the story that feels a bit slow for now.

I want to start by saying I have had the pleasure of reading this and getting direct feedback from the author. This is important and rare. Not many authors will go out of their way to accept feedback or interact with their readers.

Let me start with the good parts. The story leads me down a path I enjoyed and yes, there are some common tropes here. The litrpg elements are engaging and the harem elements entice. This is how it should be and I do want to give Nathan accolades for taking each of these themes and applying his unique twists.

The weak links. Misplaced punctuation and editing. All fixed with time, help, or money.

You can have areas in need of improvement in a story that are easy to glaze over as long as the premise is solid, the story gripping, and the prose entertaining. Good Luck Nathan. I have high hopes for this story.

The world building is fun and inventive.  Yes, there are cliches in this but they are fresh and well done.

The plot is not being driven forward by an unseen hand.  The pace is slow and at the characters own pace which is a great thing in my book.

Characters are each in their own circumstances and are making what they think are the best decission they can make.

It is a fun read.  Thank you for writing it.

Lot of potential so far.

While it's a tad early to judge the entire story I like it so far. the combat is mostly realistic and then mc actions and thoughts actually make sense, which usually isn't the case when there's anything with monster girls and boobs.

Saw a few typos so far but nothing that changes anything and the grammar is good as far as i can tell anyway.

The story is just really on point, the MC isn't some weak little man-child constantly complaining about everything.  The harem members are pretty spectacular, the world-building is tight so far,  the pacing is really good.  I'm honestly surprised if this is the authors first novel, web or otherwise.  The editing is solid, I've only noticed a few instances of misspelling.  The author is definitely ahead of the curve as far as professionalism in writing, and additionally gives a pretty relatable MC without making him either some special forces caricature or some limp-wristed fuckboi constantly whining about his position in the world.

A Dungeon Delve in 3 Dimensions

Reviewed at: Chapter 6 – A Different Kind of Bug (explicit)

1. I've never read a lit rpg book or anything involving monster girls and sex simultaneously. But I can say, unless they are all this good, I probably wouldn't read another one.

2. Superb story telling. Man, this is about as first person as it gets. The author does a fantastic job of making sure the Mc doesn't "know" anything he isn't supposed to. In many ways you get to experience the world through Andrics eyes and how wildly fantastical it is.

3. REFRESHING. I haven't even been able to read many books over the years because so many feel stale nowa days. But the way the author blends all these wild different elements together, the sex, harem, battles scenes, and genuinely good world building is fantastic.

4. It's not too cliche. There are some puns in there, but the timing is great. I found myself in a pizza place by myself in tears and covering my face with embarrassment. Not because I was laughing so hard I was afraid people would stare (I was literally the only customer there), but because I was beside myself laughing and shaking my head at the same time.

5. The character building awesome. It doesn't take long to fall in love with the side characters, and not just the harem girls. The rest of the crew is pretty freaking fantastic. There are some characters that if they were deleted I would probably cry.

The story is a lit RPG but with a bit of a twist on how they are usually done. The author also uses great vocabulary and presents the story in a creative way that keeps us the reader enraptured. It's not hard to find books with sexual content and some action, but it is hard to find books with sexual content, action and good storytelling. I came for the sex stayed for the story.