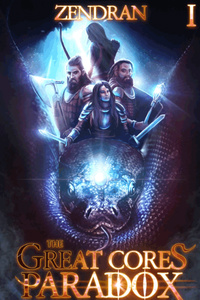 Reviewed at: Chapter 11: The Festering Sickness

When I read this story's summary, my first thought was "Oh, it's a Snake Report ripoff." And indeed, as I read through the first half-dozen chapters, I noticed many similarities: a tiny snake worshipping an imaginary god, trying to survive in a hostile underworld filled with glowing, poisonous mushrooms, told in conversational first-person replete with hyphens of questionable grammaticality.

Of course, given that The Snake Report is a great story, similarities aren't necessarily bad. Furthermore, this story stands well on its own. Despite the small number of chapters released so far, we already have seen significant, interesting worldbuilding (while avoiding infodumps). The story is well written, with no typos that I noticed. The story does a good job of portraying the system as something mundane to the world's inhabitants rather than "other," which is difficult but, I think, important to a good, realistic (insofar as it can be) litrpg.

Given that the story is still in its infancy, I don't think I've read enough to give it 5 stars, but that may change later. I am mildly worried that Paradox will not be so cute when they become more powerful. Currently their zealotry and vengefulness are mostly funny, but that will change if they start massacring humans in the name of the Great Core or something. The story's tone seems to suggest a sympathetic MC, so I hope that the MC remains sympathetic. Of course, if Paradox is meant to be more of an antihero or villain, then that's fine, although I personally wouldn't find the story as enjoyable.

Reviewed at: Chapter 5: An Agonizing Thirst

First five chapters were highly enjoyable. Our main character, a baby snake turned ouroborous, is endearing and fierce. This is the first story to introduce me to the concept of an ascended creature (one who has eaten a core), so I'm eager to see next week's installment. Grammar is fairly flawless, though sentences could be trimmed here and there. There was no repeating information, and I felt the paragraphs were nicely sized. Looking forward to seeing where the little snek's adventure takes us!

The story is off to a great start! The protagonist's narration style is a wonderful blend of reliable and unreliable that really sinks in the impression that... yeah, we're not looking at a human here. It sees the world differently! The two chapters so far we've gotten to see from a human perspective reinforce that amazingly! It's a unique style that's not taken too far - it's just enough to be a fun flavor for the book without making the scenes difficult to understand.

The grammar's pretty much flawless, from what I've seen. There are sentences that are technically structured incorrectly, but it's done on purpose to set tone, and works well. A young, first person narrator will do that to you!

I'm very very curious about the world so far. We're getting little tidbits of worldbuilding woven very smoothly into the story, and it's painting a very cool picture. The plot itself is fun, although I'm a little bit concerned and will be keeping an eye out in case it starts turning into a dime-a-dozen "raaaar amgry at losing must grind stats instead of ever having character growth." It seems to be avoiding that pitfall so far, though.

So far we have one and a half characters, but I like what we've seen! Looking forward to seeing if we're about to upgrade to two full characters, which is looking likely. It doesn't feel like a lonely story so far though.

All in all, a great work so far! Looking forward to seeing where it goes from here! :D

Reviewed at: Chapter 3: The Snake That Eats Its Own Tail

The snek is forever loyal to the great core. It's will is unwavering, and any enemies that stand between it and its diety will succumb before it's might.

This fic is super cute, probably in part because of the beautiful snek-thoughts narration style, but it also has that satisfying progression element that you come to RR for. Go on, read it! If you enjoyed stories like Shade Touched, you'll enjoy this one too.

Reviewed at: Chapter 7: [The Endless Cycle]

I like snakes. I like stories. I especially enjoy stories about snakes. The writing is good, with only my poor reading comprehension stopping me from just completely losing myself to it.

Also, just for funzies, here is my opinion on the idea of ouroboros. Please don’t take this seriously.

Snakes are almost universal, with only Antarctica, Canada, the Northern bits of Asia, and Ireland being notably safe (although snakes were never in Ireland, so St. Patrick removed a different kind of “venomous creatures”). This allows many cultures to interact with them and figure out different ways to slot them into their mythos, and allow different cultures to understand the gist of “ouroboros”, but Occam’s razor be damned, I think my explanation is cooler. The base of this idiotic string of ideas is tied to ball pythons. Ball pythons, as you might have guessed, are a type of snake. They are very common as pets, leading to them having a large market for specific colors and patterns. One of the rarer patterns is the “spider morph.” This morph’s gene is directly tied to a lack of coordination and balance, making the sale of such snakes to be banned in many circles. In my eyes, this could allow for a different gene to break: the one that controls your kinesthetic sense (a general understanding of where body parts are in relation to one another). This is important to ouroboros, trust me. Another thing to note is the natural habitat of the ball python, being west and central Africa. If you’ve done your history, you might understand that this is just about where humans were likely to have come from. If  somehow magically stars aligned, it might have happened where a group of humans migrating, could have run into a snake, (not a ball python, but that one with venom) had managed to be born without the gene that gave them their kinesthetic sense. And if that snake had managed despite it’s disabilities to reach the length that it could see its tail by the time the humans were there, potentially the snake could have bit its own tail, with the pain from the tail convincing the snake that the prey was fighting back, so it should bite harder, causing a feedback loop. On top of all that, the human must have seen this one snake biting its tail, causing the root of the story. Now that a single group of humans knows of the ouroboros, the group can split off, allowing some different places to understand it while leaving the others in the dark. In short, all that would need to happen would be as follows;

A: The potential for a genetic deficiency would need to jump from the spider morph gene to a gene that controls kinesthetic sense, across the family tree from a constrictor to “colubroid” snakes.

B: A snake with the broken gene would need to survive to a reasonable size, managing to not be immediately killed by anything around it.

C: A group of Homo Sapiens would need to be in the area of the snake, perfectly at the time where it would strike itself, before they can even have the chance to see it.

D: The story and idea of ouroboros would need to stay relevant in the minds of this group even as they move across the world but the idea can never be too prevalent because that would force even more religions to use ouroboros subsets.

How very likely. Why did you read this far?

Reviewed at: Chapter 20: The Little Snake And The Bad-Things Part 2

This is a well written story from the perspective of a snake spawned by the Great Core with a habit of biting its own tail. I've noticed no mistakes in grammar, the characters feel pretty real, and while we haven't been told much about the world as a whole explicitly, the bits that we have been given so far hint at a solid foundation for an interesting world.

Reviewed at: Chapter 8: A Gaze of Flame

I like the Snek, Snek is nice. Snek is reverent of the Great Core, like all Should be. Read Snek and enjoy.

If you enjoyed The Snek Report, you'll love this. The thought process of the Snek and its rationalizations for the things it encounters is the real meat of this story.

Pretty good. Solid personalitys, good discription , great snek mc, stupid not-needle-female. Do not worry about the human interactions new guys, they probably are some of the novels best moments. Snek 4 the win, Hail the Great Core .

Edit: It seems like I didn't wrote 50 words ... Snek is good, sneek is life, little snek go eat some mice.

Reviewed at: Chapter 28: The Anger Of A Mother

Royalroad has had quite a few snake MC stories over the years, many being incredibly good.

But this one has the potential to be hands down the best at its current pace.

This will definitely make its way to the top ranks on this site in no time.

Reviewed at: Chapter 8: A Gaze of Flame

An adorably dumb snek tries to be a better snek of the core, paradox Is the personification of the ork phrase "me not dumb me grog" overall a very interesting perspective plan to at least read till snek brcomes supr snek, and fan artist can i get a cute snek please?