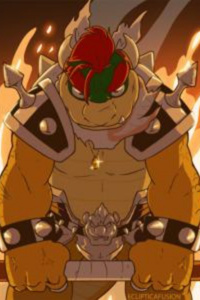 What's A Koopa To Do? (My Hero Academia/Bowser Self-Insert Story)

A MHA and Bowser SI mashed together. Please enjoy.

HE CAN'T KEEP GETTING AWAY WITH IIIIT!

In all seriousness, the story is interesting and engaging. The premise is wacky, sure, but the author is able to go beyond the classic "What-if" and actually bring depth from the world and how it interacts with the main character.

I've read the author's other fanfiction with a less or equally wacky premise, but both are surprisingly good.

Reviewed at: Chapter 7: At Home

This man has yet again created a SI story that isn't garbage. The way that he makes the main character act after being plopped into this world in a new body is both fun and realistic. Coupling this with the fact that our mc only knows of the first season of the show brings a good amount of anticipation to when we'll be able to see him have to act with only his training and heroic tendencies.

Really good! No glaring grammar problems, no confusing stuff just like the original with a twist. Not saying it's copied, it's good on its own. The story is still starting but Bowser really kicks ass in the story and I love it! The characters are good and life like.

I hope for more chapters!

Reviewed at: Chapter 7: At Home

The Title had my sides into orbit and I just assumed this would be another one of those self-insert wish fulfillment garbage piles, stinking to high heaven. I clicked on it and wasn’t won over by the synopsis, but decided to check out what amount of clusterfuck I had stumbled onto by reading the reviews.

Don’t get me wrong, this is still very much self-insert and to an extend whish fulfillment, but the difference is the absolutely massive amount of care that has been put into this. The characters are actually portrayed like real people. The dialogue is top notch. Everything feels high-quality, because that’s what it is.

There are no grammar mistakes to be found. Anywhere. The Author has a good grip on the English language.

The style is appropriate for the story. There are no cringeworthy scenes, People are just People. With the story reflecting that, by following the very believable decisions they make along the way.

Usually, fanfiction has this awkward dance around the source material. This story just gets it, right from the start. The Protagonist is thrust into the world, no explanation given. He is lost and confused, trying to adapt to this new body of his. Searching for anything even remotely familiar, he latches onto the little scraps he remembers from his real-live-knowledge of the show. The events that follow, do so naturally.

Give this a read. You wont regret it.

The story as of chapter 7 has been very enjoyable so far. I came into this thinking that it would just be a silly crossover, but I couldn't have been more wrong.

The story has a very "genuine" way of being told. Even though it's being set in a fantasy world I assume we are all familiar with, starring a character from the Mario series with hardly any dialogue, the story flowed wonderfully. I didn't doubt for a second that anything in the story felt out of place. 5/5

As the score says, there are no grammar problems. At least none that I noticed. 5/5

However I will have to say one thing. This is a fan fiction (albeit a very well written one). So naturally it doesn't have its own identity. It relies on the MHA series to carry the background. But, with how the series is going, I don't feel as though that will be an issue much longer. But for now, part marks. 3.5/5

Sorry for the long review. But overall, a surprisingly phenomenal story so far that has an immense amount of potential to be something special.

Here we are, double the amount of chapters later, and my opinion has actually changed!

The two things that changed were my thoughts on Style and Story.

Style: The style has gotten better. Before I gave it a 3.5/5 for it's reliance on the MHA lore. But this story forged its own identity over time and i'd say it's nice. Definately better than before.

Story: If any of you had read my last score the story score went down! How awful and tragic! But there's a good reason for this. Not because the story is getting worse per-se. But instead that the story is slowing down, and by slowing down I mean grinding to a snails pace. The actual read is still enjoyable, but nothing really gets done. The MC definately needs something to work towards, some kind of overarching goal, really soon or the story is gonna get stale. 4/5

But! This story is still very enjoyable! I'd recommend at least giving it a shot and reading a couple of chapters. It's just got a couple of kinks to work out and it'll be a A+ series, right now it gets an A-.

he so good at this

He makes the world of my hero acidamia have depth you can figure stuff out and their arnt many if any plot hole and if their are you really dont notice them the charicters have persinality and dont go out of charicter and do somthing they would never do in the way he describs them. plus a self insert is always good in my book.

After reefing three chapters in am hooked. Not often you find such a gem in the fanfic section. Even better is the fact that it just seems to flow effortlessly.

The gramme is quite good with only minor spelling mistakes, good overall flow in dialog and good use of times kips so you don't end up bogged down by meaningless filler.

Definitely recommend this story to anyone interested in the fun side of selfinserts.

Who would have thought?

Fanfiction? Self Insert? I didn't think this would be good, but the cover art had me click on it.

It's literally three chapters in and we have my little pony references manga references and Bowser being the MC. What else can I say? The author made it work. I've read the first three chapters twice now and honestly? I just want more.

To the author : Serious props, I didn't expect this level of quality and can't wait for more.

I enjoy all of the character interactions; the fact that there's a fanfiction about Bowser in MHA is novel; the original characters have actual personality and are interesting; The MC seems to have actual character flaws and isn't a Gary Stu (he swears way too much and he talks like a lecturer to everyone and it's really annoying, and he has even acknowledged that he's been acting like a weirdo.)

My only complaint stems from what was mentioned above: the way he talks. He constantly talks like an old man lecturing students and it's annoying to read, and probably annoying for the characters to listen to. I'm just hoping that other characters acknowledge his annoying way of looking down on people and we get some character development in that aspect. (this is all me assuming that this isn't just a writing flaw stemming from the author trying to cram in the MC interacting with every main MHA character as possible.)

What an insane combination. It works so great!

It's very good. What an insane combination. The grammar of this story is as good as it gets on this site. The characters are great. I have seen a few different (blank) in mha fan fics, and this has gotta be the best one hands down. I am so excited to see what bowser is gunna do against the league of villains in the U.S.J arc. I might breakdown and get the patreon just for the early chapter.