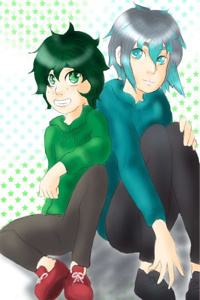 When Paths Converge: A MHA Fanfic

Izuku frowned softly as he looked at Yui-nee's door. They’d waited until night to leave Eraser’s apartment and return to their own, deciding to take a break from vigilante-ing and just take it easy. He thought...well, he thought his sister was okay. She’d been teasing Eraser and Present Mic- he still couldn’t believe they were a couple! - and acting normal after he’d woken up.

But once they were back home, she’d gone to her room without a word, shutting the door and that’d been hours ago...maybe she was just sleeping but- ugh! He couldn’t help but worry about her. So, after he changed into comfier clothes he settled down on the couch, his eyes glancing at the door every so often. As the time dragged on, he’d get up, pacing around a bit and straining to listen for any sounds. Eventually he settled down right outside her door, worrying at his lip.

Was he being dramatic? She could just really be asleep, and he should be too. He sighed as he stood up, his legs running with pins and needles and he was about to walk past her door when he heard a noise that was quickly cut off. It sounded...like a sob? He frowned before he raced into the room, his eyes widening when he saw her curled up on her bed, teal eyes red rimmed and swollen, tracks of tears still glistening on her skin and her hand covering her mouth as she stared up at him.

“Yui-nee...what’s wrong? Are you hurt? Can I get you anything?” Izuku tried to keep his voice soft and gentle as he approached the bed.

“I-I’m fine, Izu...” Her voice was dry and rasping, almost matching Dabi’s as she looked away from him, quickly scrubbing her sleeve against her eyes.

“You’re not fine...” He said softly before he crawled into bed to hug her gently, the movement awkward since he had to do it around the blanket. She stiffened at the touch; he couldn’t even hear her breathing for a long moment before her arms wrapped around him, her fingers trembling as she crushed him to her in a hug. She took in a shaky breath before Izuku felt what he could only assume were her tears seep through his hoodie.

“Shh...shh, it’s okay, it’s okay.” He murmured, rubbing a hand in circles against her back. He knew she’d never hurt him, he couldn’t bring himself to be afraid of her, not after what she’d done for him. Without her, he’d still be living at the beach. He smiled softly, “Yui-nee, you’d never do that. You’re so much better than what you think of yourself. You’re a good person.”

She shook her head against his shoulder, “Izu...I almost-”

“But you didn’t. That’s what counts, Yui. You told me to stay away, you dealt with all that pain by yourself...you’re so strong.” He soothed, holding her close as she cried, mumbling out words that he barely caught, but there was one that he managed to decipher. “You are not a villain...Kami, Yui, you aren’t the villain your...parents- I don’t even want to call them that, they don’t deserve that title – you aren’t a tool for them to use.”

Izuku held her close, smiling softly as she slowly calmed down. “And you have me now, Yui-nee. I’m not going anywhere. I’ll always be here for you. I promise.”