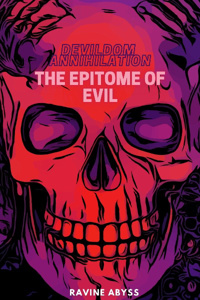 Devildom Annihilation: The Epitome of Evil

Chapter 0001- Diary: A Reminiscent of the Past

A man dreams of obtaining power, women, immortality, wisdom, and many more, but sometimes the most minor things can be the most satisfying. After years of bloodshed, what could be more satisfying than a warm bath? Elias laid in the bathtub relaxing all of his muscles. He gazed at his lean arms, scratch marks around the nerves, and burned skin.

He stood up and saw his reflection in a full-body mirror, a lean yet muscular body with scars left behind by a sword. His perfectly symmetrical face had smooth milky skin, eyes that reflected the color of blood, a pointy nose, sharp jawline, and greasy black hair.

After the war, he walked victoriously but then burned to death. Then he waked up here in a bathtub. Not that he minded, the bath was relaxing and washed away his fatigue.

Gently caressing his face with his hand, Elias said, “This face, it’s mine, but this body....”

He got wounded in the battle but didn’t remember having such burn marks and scars. Also, his face was younger, as an 18-year-old. The curse markings on his body had also disappeared.

He wrapped his waist with a towel and exited the bathroom. There a maid greeted him and gave him some ointment.

“Your father sent you this.”

He pondered, A maid in this day and age? Looking around, he saw wooden furniture, woolen clothes. The bathroom also felt medieval and a father? He looked into her eyes and asked, “Where is this place?”

The maid answered with no hesitation like it was a regular thing. Her arms were slender, eyes looking down, no sign of trembling or fear, and a bit of bloodlust, ‘An assassin, I see,’ he thought.

‘I see I have a home and a father along with an assassin maid. How strange?’. He wondered.

He was sure he died, 'Did I get reborn somewhere else?'

He asked the maid to guide him to his room. Luxurious items filled his room. A vast bed, wooden textures filled with designs, chairs, an elegant sofa, a teapot, and some glasses. In his wardrobe, there were new clothes, plain yet expensive attires.

On the table beside the bed, there was a locket. Elias grabbed the locked and opened it. Two sides of the locket had two pics. One was his photo, and the next was a woman.

His head felt a sudden ache, “Ha...”, he realized where he was. Opening the two large windows in looking at the view outside reminded him of his past, a past so insignificant, he barely remembered anything about it.

“After living for hundreds of years, I seem to have forgotten even where I came from.” he tried to remember things as he wore his clothes. Black innerwear, and a coat along with comfortable pants.

‘If I remember correctly…’

He looked below his bed and found a dairy.

Since little, he had a habit of writing a diary.

There were many dairies, in fact. Elias started reading them to remember a bit about his childhood. Some key points written in his diary were:

Today was my birthday, no one wished me.

Why do they not care?

Why do my brothers hate me?

Why am I so hated?

Today my brother beat me, saying I repulsive. Everyone says I am awful, but no one says why?

The academy kids are always in a group, smiling.

They look so happy, but why does no one look at me?

Today the results were out.

I topped the class.

I was so delighted and wanted to tell my father and mother, but before I could leave the academy, the professors called me and blamed me for cheating, but I did not cheat.

I try to convince them, but they did not listen; my sister entered the hall.

I begged her to convince the professors I did not cheat, but she said, “He won’t admit this easily. Whip him.”

It hurt, it hurt so much.

They whipped me for hours.

I could not endure the pain. I lied and said I cheated to be free of the pain.

They laughed and said they must punish cheaters. They locked me up in a dark room.

It was so scary. My body trembled, I cried, telling them to open the door, but no one listened.

Why won’t anyone listen to me? I was hungry and starving. I read in a book, family members love each other, spread kindness and love, but then why do I never see that happening in actual life?

They say pray to god, and your worries will fade away, but why does my heartache no matter how much I pray?

I read god loves everyone, but then if he loves me, why am I suffering so much?

He opened his door; the maid invited him to the family dinner.

He walked down the stairs and arrived in the dining room. They filled the room with a delightful scent, a large wooden table, food served along with steaks, chicken, and other items. As he walked near the table, he could see his family sitting there, his father, the current head of the household, Calvin. Next to him were his two wives, one his stepmother and the other his genuine mother, along with his two elder brothers and one elder sister.

As his gaze met theirs, his memories of the past slowly resurfaced

He was the youngest among them. Every one of them except him and his genuine mother had blonde hair along with red eyes. Blonde hair and Red eyes were the traits of the ‘Aazumuth’ family.

Elias’s eyes looked down as his father spoke, “Yes, father.”

He barely remembered their names and felt no sense of bond. He looked at his siblings; the eldest one, Droid, was in his mid-twenties, an upright man with a grave sense of justice. The latter, Keth, however, was a twisted boy in his early twenties. He remembered his eldest brother as he played a significant role’s upcoming events, while he did not even remember what happened to the other. And his sister, a sadistic beauty, played the most crucial part; however, this place was like a small drop of water in the ocean, a very insignificant drop. He cared not about the events that would befall his family and this kingdom but cared about how he could profit from it.

The butler served him food, forgetting everything for a moment; he just focused on his food. His manner was elegant, and his etiquette represented that of a proper noble.

The rest of the members gazed in surprise,

“Since when did a suicidal maniac learn some manner.”

However, Elias just focused on his meal.

Keth felt difficult to breathe as immense pressure engulfed him.

“Don’t insult your brother while having your meal.”

Elias could feel his sister’s gaze upon him. Even thinking back, he still could not remember the reason she hated him. Not that he cared...

“Don’t you already have enough?”

His father asked. The other members’ faces turned pale, listening to his request.

“Very well, take the money you need from the butler.”

His father agreed readily. He finished his meal and left. While leaving, his gaze met with his sister but did not last long.

“I will head out first.”

It was not proper etiquette, but Elias’s father just seemed to have not cared, and the rest dared say nothing in his presence.

His father was the duke of the Sylvia kingdom. ‘Azmaveth’ family was one of the most powerful families that supported the empire.

He returned to his room.

‘Once my father dies, the war of inheritance will begin.’

As his memories resurfaced, he remembered, “In my previous life, Droid was sent to serve the empire, my sister won the inheritance, so she must have killed Keith.”

He made vague assumptions as he did not remember when and how they were going to happen.

“As for me, hmm, right, she sold me in the slave market, ha-ha, to think I would remember such days.”

He laughed it off like it was no big deal.

Some may seek power to live a luxurious life; some may seek vengeance, some may seek it for freedom, some may desire it to prove themselves, and everyone has their reason to crave something. Revenge, pride, integrity, pleasure matters none to him. Still, there was a time when he caved such things, a heart filled with rage. He lived like a mindless demon, but as the clock of time ticks, a man changes. Be it for better or worse, a man changes.

He continued to read the diary. The indifferent expression on his face never changed while he skipped through the pages of the journal.

Today was the awaking ceremony.

If I awaken powerful abilities like my brothers, then will my father look at me?

They said I had no potential.

I could not use magic. I had no talent to hold a sword, but why?

What did I do to deserve this?

No one cared for me.

My sister said I should kill myself, then maybe the father and mother will moan for me.

I stood in my window looked down; it was so scary, my body trembled.

I asked myself, ‘if I jump from here, will everything be over?’, but it was so frightening, I could not jump.

I tried to get down, but my legs slipped, and I fell.

I woke up the next day surrounded by priests; father was also there. He was looking at me. I felt happy.

But then he left.

I wonder if I jump again, will I get more attention?

I jumped. It hurt; this time, there were only priests.

Why don’t I see father and mother anywhere?

I tried again and again, but no one cared anymore.

They sent me to the academy for treatment.

They said I was sick.

I wondered in a playground while looking at kids practice swordsmanship and magic, where I found an injured crow.

I took it into my room to cure it.

It got shot with an arrow and was poisoned.

I asked the priest to heal it; they said, “how dare you to bring such an impure being near me” they refused to help.

I could not treat the crow, but it looked like it was in pain.

So I took a butter knife and slit its head.

A maid opened the door and witnessed me killing the crow.

I wonder why she screamed and ran away?

The next day everyone called me a lunatic and a monster.

A note from Ravine Abyss

Thanks for reading! Any form of feedback would be appreciated!
Chapters will be released weekly

Bio: Just A Young Teen Trying To Write A Novel