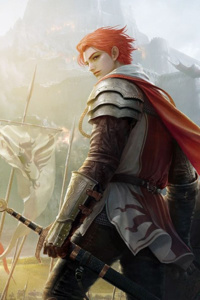 A/N: I'm currently a college student, so I'm not sure a super consistent schedule will exist for this. I decided I'm going to put out a chapter at least every friday, and write extras whenever I can. Thank you to Harry David for my first comment, and your encouraging words.

The roars, screeches, and worst of all clucks of beasts were ringing through the air while I sat on the ground. I had lost the 3 lizard chickens after running through the woods for what felt like an hour, but was probably more around 10 minutes. When I jumped over a small creek trickling between the roots of two of the bigger trees I had seen, my legs finally gave up on me as I toppled to the ground. I heard a Ding, and readied myself to die. Some part of me was shocked at how calm I was about leaving this mortal plane, but most of me was too tired to care. A minute passed, then 2, and I didn’t feel sharp talons or teeth tearing into my skin. When I looked up, a shining barrier was flowing along the same path of the creak I had jumped. The barrier was gold and shimmering, like liquid yellow glass. The lizard chickens, or as I now dubbed them, Lickens, (I never was good at naming things. My baseball team was called Seth’s Baseball Team, incredible I know,) were bashing their heads on my ethereal protector. They growled and clucked at me menacingly before walking away.

Taking a deep breath, I fell to my knees and let gravity press me on to the ground. My heart was pounding, I had never run that fast in my life. Remembering that I heard a noise before I was saved, I wondered what it had been only to have yet another blue box appear in front of me.

The second message only appeared after I read the first, and it confirmed two things. One, that I could increase my stats through hard work, and two, that I wasn’t the only one taking this Tutorial. I couldn’t help but wonder what the prize could be for about 3 seconds before a loud noise startled me out of my contemplating state. In front of me was what looked like an exact replica of a museum stand, plaque and all, minus the glass that kept the object safe. I hesitantly stepped towards it.

“Are you my prize? Must be. Unless you’re a trap.” I didn’t take the time to wonder if talking to myself meant I was losing it and instead read the plaque before me. Overcome your limits. Places 500-1000. What a weird way to give me something. On top of the stand lay a velvet pillow holding a fist sized white crystal. Hesitantly touching it, there was another Ding and the crystal dissolved into my hand. I blinked and the stand was gone, the plaque too, leaving me to read my message.

I expected the first messages, sort of, but the Overmind box was a surprise to me. I thought she wouldn’t appear again for a while.

“Why did I call her a she?” I wondered out loud, only to be met with a swift explanation in the form of, you guessed it, a box.

I was a bit wary at the response. I didn’t think the Overmind could hear me, but since they can track my actions and movements I guess it makes sense. I ignored this new development for now and tried to use my new Appraise skill on my spear.

Never break? That was useful to know, but the fact that it was otherwise worthless made me despondent. How was I supposed to do anything with this? So I sat down and pondered on what I should do. I knew what I was supposed to do according to the box, fight and explore, but the only monsters I had seen so far were far more powerful than me.

“...” Wow. I was speechless. Did the Overmind have no shame? Two seconds ago she was bad mouthing my whole species, and now I’m supposed to cheer up and just go? No, screw that. I’d seen what was out there and I wasn’t leaving this Safe Zone until I knew I could kill a Chimera. Which, now that she says it, that sounds like a much better name. I decided I should first see how this new agility felt. Before I really got into it though, the creek was calling my name. I was thirsty, and since the creek looked clear and it was a Safe Zone I couldn't see any harm in gulping down a few handfuls. I would need food later too, but that wasn't as immediate of a concern. As I began to move around after I drank enough water, I noticed the difference immediately. There wasn’t a massive increase, I wasn’t suddenly twice or even 10% as fast. But the difference was there and it was apparent. Could I increase all my stats this way?

The messages kept popping up one after another, but I was busy doing push ups. If I really could get extra stats like this then I would milk this Safe Zone dry. I was never a fitness buff, however I did go to the gym occasionally, I did have to keep a certain level of fitness for my team after all. So I began to rhythmically exercise my body, all while in the corner of my eye a certain Overmind was fuming.

At least I’ll have some entertainment while I work out.

A/N: I'll have an action scene next chapter, don't worry. Let me know if the boxes are too frequent as well, I'll tone them down. Who knows, maybe we'll even get to meet our new blue boxed Overlord, I mean Overmind face to face in a couple chapters. Shout out to user Sea_Leon for pointing out my character needs water in order to actually survive. Added that in. Thank you for reading!