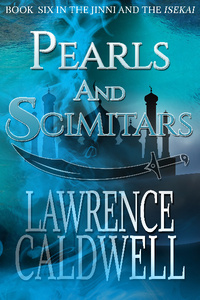 Trying to keep her face a placid mask of drunken joy, Shai’na stepped back, receding from the center of the throne room as Darius gave his concubines away to be feasted upon by his satraps.

She was still in shock of his revelation. The barely clothed woman standing next to him was a jinni? She certainly was a sorcerous of some kind—but could it be true that the very woman Shiro Takeda wanted to rescue was the same?

It’s time to depart from here.

Turning, she found Kanu not far off, dutifully involved in conversation, a glass of barely touched wine in his hands. He swayed with the rhythm of the music and drums. After a time, he glanced toward her and seemed to see the look she was giving him. He nodded almost imperceptibly and began to extricate himself.

They met at the doors, and as they walked toward the massive doors of the throne chamber, Kanu said, “It has been an eventful evening.”

“Indeed,” Shai’na said. “It is time for us to retire for the night, Kanu.”

“As you wish, lady vizier,” he said with a nod.

“Go on ahead,” Shai’na said. “First I must make a show of faith to our sultan and say hello to this… jinni.”

With a final nod, Kanu left her there.

The loud tempo of the festivities was beginning to make her head heart. With a heavy sigh, she downed the rest of her wine and made for the throne.