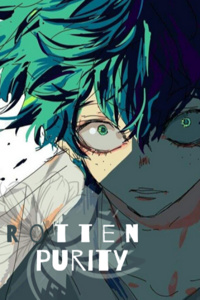 "Bias, like beauty, is often in the eye of the beholder.

Facts are your firewall against bias."

He felt his bone snap, the white twig poking out up and out of the skin it rested underneath, but that was it. There was no burn that charred him deep to his core, or sizzling electric current that accidentally found its way to his heart. He felt oddly at peace for some reason, like someone had taken the burden of the electricity away from him. It swiftly dissipated as a sense of panic and unease set in.

This had never happened to him before.

That lightning bolt took everything out of him; he would be useless from here on out. He could only take that risk because there was no way he was breaking through All for One's defense otherwise. Normally, he'd be covered head to toe in injuries, but he had only broken a single bone. In this case, though, he'd prefer the injuries. At least then he'd know what was going to happen. Unknowns were never good to have in combat.

His eyes were blank as he looked at the placid night sky, with not a hint of disturbance.

All Might continued to fight All for One, exchanging punches and kicks, but subtly losing every exchange. It was a nick here, and a scrap there, but they would eventually add up. That wasn't even considering his time limit. Even without it, though, it looked as if All for One would be the winner regardless. He was that dominating. And Deku couldn't do anything to help now because he was useless.

He was as useless as he had been in middle school-

A voice..? There was no one here besides All for One, All Might, and himself!

There was no way he should have heard anything at all.

Deku just blinked. What..? Was it some kind of telepathic quirk user...

{What were you even thinking?! I swear. A lightning bolt of that p-power would wre-wreck your body. I'm go-going fuzzy a-again...}

Before he could even begin to ponder on the implications of that, it answered.

{Just sit back and relax. You'll... You'll get your hard-earned answers in a minute, so watch. And don't... don't hurt yourself again...}

The voice fizzled out, and the sky was lit up in a dazzling grey, tinged with spots of black and white. The lightning looked as if it had a mind of its own, as it swam about in the sky, before eventually converging together in a single spot. It was like a meteor shower, but with lightning that hissed and crackled as it left its brush stroke across the sky. And although this took time to describe, it happened in an instant.

All Might was... concerned, a bit. The situation wasn't looking all that well. He had safety managed (somehow) to let the young boy escape from his nemesis, and not even getting injured in the process because of the ancient evil's attention was placed solely on the young boy. It made it easy to disrupt and change the path of his powers, even with his injured body. But the moment he finally fled out of sight...

It was like a switch had been turned on within All for One's brain.

His attacks grew stronger and heavier, with a frantic quality to them, but he was just so experienced that he didn't reveal openings for him to exploit either. He had a bag of unlimited tricks and he employed them with distressing intelligence and creativity; it took all he had to come out of each exchange alive and well. Still, he started to accumulate little knicks and injuries here and there. To the inexperienced eye, it was nothing; he, however, was growing increasingly worried. It must be understood that neither side had even brought out their trump card yet.

It was just an endless torrent of regular blows. It was during his 50th or perhaps 80th (he had lost count) exchange that he felt a shiver go down his spine. It wasn't even towards All for One, he realized, moments after he coincidentally looked up that the sky.

It was equally beautiful and terrifying.

But oddly, the longer he looked at it, the less he left that it was a threat.

"That lightning... HAaahahahahahAHaahh... He's done it. He's tamed that wild horse that bowed to no-one!" His smile reminded All Might of mentally ill patients in the hospital. Or perhaps individuals with many screws loose in their heads. "He truly has the ultimate power!"

(The sight of him almost breaking down in tears as he said he wished to be a hero and was quirkless - helpless - remained in his mind.)

It was only when the lightning bolt crashed to the ground with heavenly might that Toshinori Yagi came to his senses. Right on top of All for One, faster than any human could possibly hope to reach. His vision was dyed grey. The shockwave threw him backward and the sheer electricity in the air threatened to make his muscles twitch, but he didn't let them. He stared straight ahead at the crumpled, yet still very alive form of All for One. He had a job to do.

He leaped forward into battle once more.

This time, though, he was dominating it.

Deku, meanwhile, was looking at the sight of the lightning bolt he technically produced with the same shock and abstract wonder as All Might was. It didn't make sense; even in his wildest dreams, he didn't imagine that he could form such a powerful stream of lightning. He had a hard cap to his abilities, in both quantity and control. He had been steadily increasing those two variables over time, and although he could mess around with the human mind however he chooses, he couldn't produce such a large, powerful, lightning bolt with such accuracy.

(He had a sinking suspicion as to who, or what it was that caused this miracle, but was hesitant to acknowledge it.

It was simply too preposterous to believe.)

{Well, you better start. That's what I am after all! It wouldn't do if my host was in denial.}

{I've been meaning to say this, but that's not a name.}

Deku's eyes involuntarily widened; it wasn't the first thing he expected this little sentient lightning quirk of his to say.

{...Sure, I guess. Name the gray-colored lightning 'Gray'. Very creative. I'll have you know that there are little bits of black and white and-}

Deku looked out at the battle between All Might and All for One, sighing at the abrupt paradigm shift.

"It was thanks to you that the battle didn't end in disaster, Gray."

"I imagine you aren't satisfied with being my 'servant' as a sentient being."

{What are you implying, Izuku Midoriya?}

He was somewhat taken aback at the cold tone of the lightning spirit, but not really. It didn't change the words he would say.

"Although it would be a pity to stop here, I'm satisfied that I got to full All for One down, in the end. Honestly, there's nothing I can do to you."

There was a crackle by his ear, and a long, willowy serpent of gray lightning appeared in front of him.

'...It always did appear in a serpentine-like form, now that I think about it.'

{I take it that you are implying I consume your ego, yes? Your paltry human mind and body...}

Its beady, cold gold eyes stared at him like he was a creature that was pitiful and arrogant at the same time.

That was the million-dollar question right there. (Deku couldn't hold back his shock; to him, it was incomprehensible.)

"...Do you want to spend the rest of your life in servitude to another, lesser, intelligent being? Is that really what you want?"

{Your words make a note of sense... However, that isn't the real reason you're asking. Do not doubt my intelligence; I have consumed and assimilated with all that you have given me excluding what I have deemed unnecessary. You simply want to throw a bet on life or death; of course, you prefer death most of all.}

It slithered like a real snake as it moved closer to him.

{Do not insult me with anything less than your true motives, host.}

He got the sudden urge to laugh uncontrollably but withheld it.

"You got it in one, Gray; still, I'm genuinely curious... Why do you want to stay as my quirk?"

{To be honest, you're quite pitiful, host. Someone's got to take care of you. You've fed me and have let me gain awareness, so why not? Other than that... Why can't I just be a little helpful lightning spirit? Is there some rule that dictates that I must take over your body?}

Deku was startled for a moment, but then he chuckled a little.

It did have a point.

"I look forward to our future partnership then, Gray."

Claim your 'I was here and waiting for the cliffhanger' ticket through, you guessed it, a comment!

Bio: Hi, I'm a person (Aquarius, Female, Writer, Bookworm... take your pick). I also have a particular fondness for hot chocolate and fruit tarts; make of that what you will.