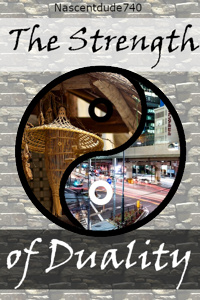 The Strength of Duality

The five of them started walking towards the restaurant they had chosen. Along the way he put away the clothes they bought into his spatial bag when no one besides their group was looking.

Suddenly, Yun Tian asked “Is this restaurant you guys are taking us to the best one in town?”

Hearing this Wu Chen smiled and said “Ah I forgot money isn’t a problem for you right?”

Yun Tian made a wry smile and scratched his head while saying “I’m not trying to show off or be arrogant you know. It’s just that since I can afford it why not go there instead.”

He really did not care about the money of normal people and he had plenty.

Ming Yu said “Alright dear, since he is paying, let's go to the Donghai restaurant. We haven’t been there in a while.”

Since Wu Chen was after all a cultivator he did make a lot of money, but they still could not eat at the best restaurant in town all the time. They usually ate at home together too.

They walked for a few minutes across town and made it to the Donghai restaurant. Yun Tian observed the restaurant and noticed there were three floors.

When they made it to the door of the place the waitress who was a young girl in her twenties asked them “Hello, welcome to Dinghai. Would you like to eat in the normal seating area on the first floor, the second floor, or in a private room on the third floor?”

Yun Tian didn’t really care so he asked the couple “Where do you want to eat?”

Seeing this group the waitress was a little confused since there were two older people along with their daughter, but the young man seemed to be the one making decisions.

Yun Tian hearing this said “The second floor it is then.”

Hearing their conversation the waitress determined money wasn’t a problem for them even though they were not eating on the third floor. Thus, she smiled even more and courteously said “Please follow me then” While leading the way.

The restaurant was quite large and on the first floor there were around forty tables and some booths. Around thirty of them were occupied at the moment. Yun Tian could tell those people eating were likely the richer normal people and some weaker cultivators.

Some of them called out in greeting to Wu Chen when he walked by. He responded in kind to them. Just like Wu Chen was kind to them and helped them, he had quite a good reputation in town.

After that, they made it to the stairs and went up to the second floor. He looked around at the second floor and noticed that there were only around twenty tables and that it looked much nicer overall with the tables spaced out much more and candles and flowers on the tables.

He saw some people sitting at the tables eating, but did not pay much attention to them.

The waitress led them to their table and they sat down around the circular table like they usually did with Yun Tian and Shen Yu next to each other and the little girl in between her parents.

Once they were seated, the waitress asked them with a smile “Do you know what you would like to eat or should I wait and come back?”

There were menus, but knowing that the couple had been here before Yun Tian said “You two can decide everything since you have been here before. That’s fine right Shen Yu?”

Shen Yu agreed with him so the couple didn’t try to disagree with him and ordered dishes for all of them and didn’t hold back with the spending at all.

When the food came Yun Tian and Shen Yu both complemented the dishes they chose and overall how much they liked the place.

They were eating and talking about how the two of them were going to leave tomorrow morning along with other things.

Just at this moment though a group of people came down from the third floor. Upon seeing Yun Tian and Shen Yu, a young girl in the group smiled and walked over.

An Elder behind her asked “Young miss where are you going?” since she was not walking to the stairs that led to the ground floor.

When he saw who the young miss was walking towards he was pleasantly surprised too though and walked over as well.

Yun Tian had his back facing them, but he still noticed that a group of people were walking towards him even if he did not see them. Wu Chen and his wife were however looking right at them and were surprised at this noble group of people walking over.

They looked at Yun Tian though and remembering his strength they calmed down.

Yun Tian turned around to see who they were and Shen Yu did the same.

Seeing who the group was led by they were surprised. The one in the lead was the young miss of the Feng clan ,Feng Mei, and behind her was the Elder with her before, Feng Shi.

Seeing his face the girl laughed and said “Ah, I knew it was you.”

She only saw his back before and was pretty sure it was him, but seeing his face she knew she was right.

When she got closer she said with bright eyes while bowing slightly “Feng Mei greets her great benefactor.”

Elder Feng Shi did the same as her. While the few servants with them bowed to him as well.

The others in the restaurant were surprised hearing this. This was the people of the great Feng clan thanking a random teenager.

Yun Tian merely laughed seeing this and said “It’s fine, you don’t have to be so formal. What a surprise seeing you guys here. I was in fact planning on visiting the Feng clan tomorrow.”