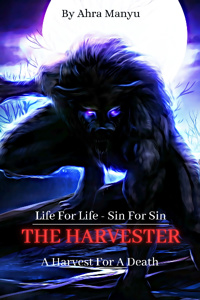 Rakna was not normal. No, unmistakably not. Whether it was his appearance, his personality, his abilities, his identity, nothing about him had ever been banal. Was it his choice? No. He was merely but a tormented soul doing its utmost to live the life it had learned to never enjoy.

Would being picked by a glorified universal abductor calling itself a system bring something out of him? Would he finally learn to breathe in the pool of blood that suffocated him?

The Harvester does not sow, he only collects. All he has ever known to feel was loss and the only thing he can do is take. He will devour their hearts and drink their blood if it is what it takes.

Tries to fill a niche but doesn't quite deliver

This story  sets  out to  do one  thing and  one thing only  --  the MC is supposed to be a certified bad ass and the general plot of the story is a fairly generic power-trip wish fulfillment fantasy. Unfortunately, the execution is somewhat lacking here, although there are still some interesting ideas within the story itself. It's still alright for a popcorn read, but don't expect too much.

I'll get the grammar out of the way first -- it's very good, so good job there.

The writing style is quite wooden. This is something that really does need to come with time, but essentially the sentence structures are all very similar and it makes reading through the story quite repetitive. Look towards showing instead of telling as well as flipping the construction of your sentences around ("Rakna does X" vs. "Doing X, Rakna ...") to give your writing a little more life.

The story is pretty unfortunate. There are some interesting concepts scattered about, such as the way levelling works and how the scarf works, but the excessive amount to which the main character has already been powered up (even before he meets anyone else) is a huge turn-off. I'll go into that a little more later. Additionally, the way in which this happens is not natural at all; it's almost like the author knows that it's somewhat bullshit for the MC to get all of the things he is getting, so their immediate defense mechanism is for the MC to ask 'why am I getting this/why am I here' and get an immediate handwavish response, to which the reply is inevitably some flavour of 'oh I guess that makes sense'. There is no mystery to the story because all questions are instantly answered and done so in an unsastifactory manner. For example, little thought is given towards the fact that just before the whole system event happens, the MC runs into a sentient snake and manages to get over it within the space of a few minutes as well as knowing instantly where it came from because of his dark and mysterious past. Like what? It would have been much more interesting if he had known nothing about the snake and over the course of the story the snake could have gotten smart enough to tell its own story. Instead, it is relagated to a looker-on for the most part and played for mugged reactions (which are not very varied either).

The worst part of this story is the characterisation. None of the characters are anything more than one-dimensional hunks of cardboard used to show off the story -- the MC is supposed to be this emotionless stone-cold killer and is pretty much edginess incarnate, but it's so overkill that you can't help but laugh at how over-the-top it is. Additionally, he doesn't seem to be able to properly function around the two women he has met so far even though he's supposed to be a sociopath -- it just doesn't make sense. If your main character is a sociopath, the surrounding characters need to be deep enough to play off that sociopathy. Instead, you have the snake just looking at him funny all the time and everyone else just kind of ignoring his behaviour or just handwaving away his inexplicable competence at literally everything.

I'm sorry if it comes off harsh, but I do feel that there are some interesting concepts in here somewhere -- it's just held back too much by the main character being too good at everything for his own good.

not for me - cringey and overkill

as a reader, i should be curious about story. This one couldn't do it.

There are only 3 characters -> MC, side-kicks and stepping stones. No more.

Side characters only talk about how mysterious the MC or how dark he is. Voo he is super cool.

MC being badass with "past, traumas, nightmares, split personality" is kind of flag for your goth teenager story. It is like "Teen wolf" but litrpg, cold MC and without romance.

MC dont have any purpose. He is like "because of this system, i had to wake up from my nap, so i am gonna beat its' ass". I mean... mc ridicule players because they became slave of system then does same thing with "i am different, i am gonna beat system's ass".

while side kicks praising MC non-stop, narrator does its too. Narrator always comment about MC's actions like how correct MC is or how brave he is. You shouldn't do it, as a reader i needed to read these traits between lines, not because you describe them.

As for system, normally litrpg makes story easier. You could assess characters with numbers but so many spesifics not always good thing, it could be overkill. MC gain OP skills easly but other ppl dont or system describe ranks as roman numbers which is weird cuz a alien says "no one knows why". The alien is probibly older than earth civilizations and system itself much older than all but using roman numbers and no one knows why??

For conclusion, i wouldnt recommend this novel. It could be good but it didnt.

Honestly, I tried really hard to like this story but I just couldnt do it. It is not even the story itself that puts me off but the mc, the author tries really hard to make him some sort of badass only for it to end up like a typical op character that is cringe as all hell.

Standard litrpg story, reasonably interesting. It's just marred by a very Mary Sue a MC. MC is edgy and gets all the power without effort thus there is no tension. Writing is ok there are some grammar errors but not to kant of them. The encounter are interesting and it would have ben quite nice with an intelligent but under powered protagonist.

simply marvelous, I love the way he is so nonchalant about everything, and the system society is one of my favorite concepts so far, and the pets are awesome as well. This is by far one of the better LitRPG novels out there and you will regret not reading it

So far I'm liking everything your throwing out there. One point I'd change would be in the fight scene grammar in specific. When reading it feels wrong and kind of choppy. "He does this, then he does that" type of thing I'm not an English major by any means so I can't put any ideas out there to help but it just wrong to me when I was saying it in my head idk if that will help any but good job I read up to the latest chapter no idea why it says chapter 2

Ok, lets be perfectly honest and say that this story is about a over powered op main character. The story knows this, nods to this, and makes a good laugh about it too.

The writing style is nice and the story so far has some pretty good depth to it. Though i could just be a easy critic, i still cant wait to see what the author has in store for us

The story has loot, nice boss fights, a beast companion, smart strong from the start protagonist, fun/funny side character, and a system god that might be regretting messing with someone's nap time🤣

I can't really think of anything negative to say about this novel, i mean yes theres the little like "why this" or "plot armor" but it explains it for the most part. The main character gets good loot cause his luck stat is higher then most. The main character is strong because hes been trained by the best there was. He learns and gets awesome skills cause he has a skill that helps him learn. When you throw it all together of course your going to get an op person unless the guy is an idiot

So far I really enjoyed this story, the system is enjoyable to read and not to hard to understand, and the story doesn't suffer from extreme edge like a lot of system story's out there.

I hope to see more of this story and It's quality.

It would have been 10 stars

Well at first I actually started reading this story out of boredom... I thought might be interesting but it's description nearly kept me from reading it actually, so did the cover... Both don't do this great story justice... Sorry for that one... I know how hard it can be to find the right words to describe a fiction without telling too much...

But when I started actually reading it I was immediately surprised in the best way possible.

Of course there are many elements we get quite often like the system, but this system is actually explained as in how works and so on. I really hope to get more of it in the future.

The broken main character is an other thing we get quite often, but either way there  is far more to Rakna than meets the eye. Not only his fast improvement (the well known element) but also his actual upbringing, 'decease' and reasoning make him special. Also he seems cold in the first place, after some time one asks oneself whether he really is that way or if it is only 'safer' for him to believe so. I am really looking forward to his further development.

Anyway it is not only him, but all reappearing characters are well-developed and interesting. Nothing like you know one...

The world building is not as outstanding as the characters but still very creative.

All in all, even if I did point out some points... I think it's one of the greatest stories in here.

Reviewed at: 38. Throne of Glory

If you like alpha male then this is for you.

The grammar is great, the characters have depths in them but I feel like their presence only highlight the awesomeness of the mc, the world building is ok.

I think the concept of the story is similar to most korean novels/webtoons, but that's just my opion.

Nevertheless it was quite good read.