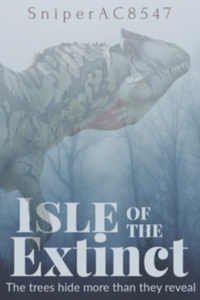 Isle of the Extinct

A ragtag gang of survivors, scraping out a living in the jungles of prehistory.

An apex predator, hardened by the wild and viciously defending his throne from competitors and the elements alike.

A strange, unnatural liquid, lurking in the cracks and cobbles in the earth, taking its toll on the world around it.

The remains and relics of an ancient yet advanced society, whose greed and ignorance led to the downfall of their most prized creation.

One mystical link connects them all.

A mysterious island, shrouded in mystery and sinisterness, revealing horrors beyond the teeth and claws of its saurian inhabitants.

Man and Beast collide in an epic arms race for survival on the ISLE OF THE EXTINCT!

PRAISE FOR ISLE OF THE EXTINCT:

"There is real effort in skill being put into this and it is unlike anything I have ever read on this site...9/10 would recommend...

"Anyone who is even remotely into science fiction and is not reading this is missing out..."

Reviewed at: Chapter One: The New World

I read this book on a different writing site and read several chapters there. It is what the title of this review is, there are aliens and dinosaurs!

The plot is complex, extraterrestrial beings using portals to transport dinosaurs and other extinct creatures into a dome on an isolated island on a planet that isn't revealed even though it resembles Earth. And three humans, unfortunately, end up getting sucked into a portal by accident, ending up in that dome where it is survival for the fittest.

The writing style is unique. It may seem not that special when I say that point of views change throughout a chapter, except the point of views aren't only of the aliens and humans but of the dinosaurs and other creatures too. It is interesting to read the thoughts of the animals and how they process what happens to them. However, the only flaw throughout the style is that some parts of a person or dinosaur's thoughts aren't italicized where it gets a bit confusing of whether or not something is part of the paragraph or thought but it is something that can easily be fixed!

Grammar is excellent for someone of the writer's age. Usually, young people aren't very good at writing with horrible grammar but this writer's grammar is much better than expected!

The characters have their tropes. A skittish coward scared at any shake of the leaf. A scientist who knows the dinosaurs and plants that are in the dome. And a military veteran, the total opposite of the scaredy-cat. But despite these tropes, the writer is able to make them unique.