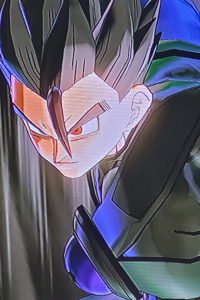 Sorry, for the hiatus. I was experiencing burnout.

“ASTONISHING...” says an amazed Moro who stands over the three defeated saiyans, staring at his newly bulked up body. “...To think that the energy of these three could restore my body to this extent.”

“Wow, great job, Moro…” Cranberry says, applauding Moro with fear in his voice. “I knew you could beat them.”

“You do realize you cannot deceive me…?” Moro responds as he turns to face his cowardly ally. “Now then, how would you go about collecting these dragon balls?”

“Well, I can pinpoint their villages with this device” Cranberry answers, referring to his scouter that he is currently using. “Each village holds a ball, so once we find the villages, the rest is easy.”

“I can sense a number of locations where they gather.” Moro tells Cranberry as they walk to their ship. “Let us begin with the closest one...”

“Whatever you say.” Cranberry replies.

“You are just so pathetic.” says a hulking, shadowy figure as he prepares to fire a green ki blast. “If you don’t take this seriously, then I’ll just destroy you!”

The figure fires the blast. “GAH!” Shadow screams as he awakens from his slumber. Calm yourself, Shadow. It was just a bad dream. Shadow turns to see that Goku and Vegeta are already up conversing with Moori.

“You’ve been slumbering for three days.” says a somber Moori.

“Three days?!” Vegeta says full of shock. “What’s become of Moro?! What is that bastard up to?!”

Moori looks away in pain and gloom while another namekian answers, “He’s already attacked three villages… He’s most likely headed for Elder Tsuburi’s village as we speak.”

“DAMMIT!” Goku moans. “I wish I could help more, but I still can’t use Instant Transmission...”

“There’s hope. We’ve not been idle these three days.” Moori explains. “We namekians have assimilation as our last resort.”

Nice power level, but it’s not enough to even challenge Moro. Shadow thinks as he senses the energies of multiple namekians merging into one.

“Oh… Like what Piccolo did with Kami?” Goku responds.

“Our strongest warriors from each village are combining to form a powerful warrior.” Moori announces.

Shadow then dejectedly informs the group, “Unfortunately, Moro just killed your Super Namekian warrior… And he did it with one blow.”

“What?! NO!!” Moori shouts with a mix of dread and sorrow as he collapses to his knees. “He was our last hope…”

Sometime later, the young namekian, Esca continues to restore the three saiyans to fighting form. Then Moori and the other namekian walk back into the room, carrying clothes.

“Your clothes looked something like this, yes?” a smiling Moori asks while holding up Vegeta’s saiyan armor.

“The symbol was unnecessary.” Vegeta mutters back while putting on his armor.

As he puts on his orange gi, Goku proclaims “With just a little more ki I’ll be able to--”

“INCOMING!! Moro’s on the move!” Shadow warns the others. “He’s headed here, he can sense the dragon balls somehow.”

“You two are more than welcome to continue fighting, but I’m going away to train.” Shadow announces while stepping back, watching Goku and Vegeta collect their wits.

Shadow instantly arrives in his neighborhood and begins the very short walk to his house. On the corner to his house, Shadow sees a man lying in the middle of a crater, unconscious.

That is… most curious, but I’m pressed for time. A puzzled Shadow thinks as he arrives at his house.

As Shadow opens the door, two blurs rush out and tackle the saiyan-demon hybrid. Upon hearing the commotion, Zangya goes to greet Shadow.

“Hello, my little munchkins.” Shadow says, hugging his kids. Looking around, Shadow asks, “Where are the others?”

“They are all at Auntie Bulma’s house.” Toru answers.

“Hey daddy, there was a weird man. He said his name was Hunter and said some weird things to Mommy #18. Mommy #18 got mad and hitted him!!” Alice says full of glee. “It was the AWESOMEEST!!”

Zangya adds, “OH, and before #18 punched him into the ground, he spoke of some nonsense about himself being from another world.”

Hmmm… I’ll have to talk to him sometime. Shadow thinks to himself. “INteresting, everyone, pack some clothes, we’re going to spend some time on Planet Yardrat.”

As Shadow’s group arrives at Yardrat, they are approached by a young man in yardratian clothes. The young man then bows.

“Greetings, my name is Seinto Wu, but you can call me either ‘Saint’ or just ‘Wu’.” says a polite Wu. “What brings you, travelers here?”

His energy feels as strong as Kefla’s, interesting. Shadow thinks to himself.

“Hello, Wu. My name is Shadow, this is my wife, Zangya, and these two are our kids, Alice and Toru.” Shadow greets back. “An ancient evil has been unleashed in the universe and I’ve heard that the people of Yardrat possess a strange technique, Spirit Control, capable of fighting this evil.”

“Sounds terrible. This way, I’ll take you the elder, Pybara.” Wu says as he gestures to the group to follow him.

“Hey, how come you don't look like the other people here?” Alice asks Wu.

“Believe it or not, but I’m actually an earthling.” Wu answers.

“But I thought Bulma and her family are the only ones that have spaceships?” says a confused Toru.

“Trust me, I have my ways.” Wu vaguely explains as they enter the elder’s abode.

One week later, a Galactic Patrol ship lands on Yardrat. Vegeta exits the ship with the galactic patrolman, Irico. Upon sensing Vegeta’s presence, Shadow goes to greet him.

“Let me guess. With the aid of both Merus and Grand Supreme Kai/Majin Buu, you and Goku were able to defeat Moro and bring peace to the universe again?” Shadow asks sarcastically.

“HMPH.” Vegeta mumbles as he looks away.

“Pleasantries aside, I’ll take you to meet the leader of Yardrat.” Shadow says gesturing to Vegeta to follow him.

Sometime later on Yardrat, Shadow, Toru, Alice, and Vegeta continue their training to master Spirit Control. It’s at this moment an explosion occurs some distance away.

“What the--?” a startled Vegeta asks.

“This is bad!” Irico informs them as he rockets in. “Moro’s thugs are here!!”

“Toru? Alice? We have uninvited guests, kindly tell them to leave.” Shadow orders his rambunctious children.

“OKAY!!” The two kids respond as they fly off in the direction of the commotion.

“Are you sure you want to send your kids off to battle?” Pybara asks with worry in his tone.

“Hmm? There’s no need to worry, they’re stronger than they look.” Shadow nonchalantly responds. “I should know, I taught them much.”

“A world ripe with energy...” says Moro’s minion who appears to be the same race as Zarbon. “This should please Lord Moro.”

“Who might you be?” says the minion as he sees two kids and Irico land a few yards away from him.

“Our dad said we can beat you, bad guys up.” Alice says with fire in her eyes.

Alice then holds out her hand and fires a Full Power Energy Wave. The beam makes a direct hit, but causes a considerable amount of collateral damage. The dust settles to reveal a badly injured minion leader. The other minions look on, thoroughly shocked to their core.

“Hey you two, make sure to not destroy the planet.” Shadow telepathically tells his children.

“D-dammit…” the Thug leader coughs out, twitching in pain. “What are you fools staring at?! FIGHT BACK!!”

“Got it!” says the two other thugs as they charge at Alice.

Before they can even make contact, Toru knocks them into two nearby buildings. Both kids then transform into Super Saiyans and proceed to make quick work of the remaining thugs, further damaging the area.

“Shadow, I thought you told them NOT to wreck the place?” an appalled Pybara asks.

“I did.” Shadow exclaims. “Just be thankful the no one lived in that area to begin with.”

A note from Superboy8338

Congrats, my two friends (you know who you are), you're now a part of DBX!!