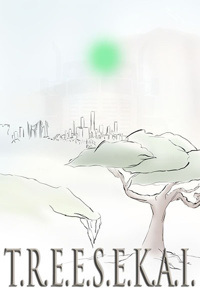 Prologue: Of Trucks and Mustard

I blinked up into the darkened corner of my room, eyes tracing a thin line that grew stronger as the sun reached around the curtains. I waited for the buzz and siren of my alarm to let me get out of bed. My thoughts roused slowly, warming up by calculating how many minutes of rest I would be missing. The world, for the moment, was still and quiet. The only noise in my world was the hum and splash of the fish tanks against the far wall.

A few long minutes slipped away and I finally sighed, rolling to my side and letting my eyes drift closed once more. In that moment, my phone buzzed angrily, a siren building in seconds. I sat up and stretched, not bothering to deafen the cacophony until my roommate kicked our shared wall. I nudged aside yesterday’s discarded jeans as, one by one, the timered lights clicked on.

I circled the room blearily, mumbling morning greetings to each caged creature in turn, from the saltwater tank to the fresh, the lizards, snakes, bugs, and myself, framed in a mirror. I scowled at my image and pondered quietly if this was why I was single.

“Is it the confidence?” I asked a gecko that had poked her head out when the basking light flickered to life. She blinked back, then returned to her hide as though the conversation wasn’t worth the warmth.

“I’d do the same.” I murmured, confident my conversations with my pets were not helping in any way.

I laboriously donned whatever was closest at hand and threw open the curtains before weaving about the room to feed the feeders and in turn, sacrifice them to the predators. Flakes fell in water and pellets in dishes as I reveled in the most enjoyable part of my day. Each pet, each with their own personality, greeting me as one might their benevolent god.

A buzz and siren ended the megalomaniacal musings and I hustled off to keep schedule.

With a shiver, I dragged myself out to the desk that had been crammed into a corner of the chilly living room. With the most recent wave of the ever-persistent virus gripping the country, the commute to work had become incredibly short, leaving plenty of time to make detours to pick up coffee, albeit from the kitchen rather than the drive-through.

I logged in, sent a few emails, and settled in for another day in isolation. Hours slipped by as I clicked through paperwork and forms. There were benefits to working from home, sure, but the tedium, second only to loneliness, made it feel like my eyes were being slowly dragged against the screen itself. With each passing hour a new voice joined the chorus of agony wailing through my brain.

I leaned back, glancing out the window as the setting sun backlit a familiar shadow. I got up, powering down the sputtering workstation, which caused the shadow to hunch and squawk. It continued to grumble as I grabbed a handful of nuts and seeds from a bag and pushed open a decrepit patio door.

“HEY” Poe crackled, the awkward raven stumbling over the patio floor as I poured out the feed onto the peeling wood.

“Hey,” I responded, my voice crackling equally from disuse. I cleared my throat and carefully sounded out “How. Are. You. Poe.”

The bird tilted his head and pondered the question before quietly whispering back, “mustard.”

I sighed, shaking my head as I brushed my hands off over the balcony’s edge to liter seeds into the hair of tourists passing a few stories below. I wasn’t sure where he’d picked up such a vocabulary, but every so often he could be uncannily coherent.

“MUSTARD.” he insisted, driving his forehead into the wood as though to make a point of proving me wrong.

“You don’t say?” I returned conversationally, glancing over the busy intersection my balcony overlooked. “In the kitchen with a knife?”

“Balcony.” he responded, disappointedly worrying at a grain of food stuck in the crack between the patio planks. In the street, A boxy blue truck blared its horn and swerved wildly upon and back off of the curb. The noise caused Poe to flutter off with a final utterance that sounded like “See you soon!”.

“See you soon.” I muttered back, disappointed my most engaging conversation of the day would end quite so soon. A few moments later, a buzz and siren from my pocket let me know it was time to go to bed. I finished out the day’s routine, closing the blinds, cleaning the desk, and tidying up a few dishes in the little time I had left in the day.

I wandered back into my room to collapse on the bed, wondering idly if this all was really worth it and at the same time, how nice it was to have a job at all in these times. Sure, I was surviving, though somewhere inside, a childhood version of myself was dying a little.

More morose musing welled up and I began rubbing my eyes against the soft throb that had built up behind them. The thoughts grew more outlandish and bizarre as my mind quietly wandered away.

Slowly, I opened my eyes, blinking up at the window bathed in moonlight. Dazed, but not surprised, I nearly blinding myself by checking the hour. Time was a fickle thing in quarantine, time off doubly so.

A shadow at the window tilted it’s head at me, the word “Mustard” clearly audible through the thin glass. I got up with a yawn and waved the bird away from the sill before drawing the blinds closed once more.

I yawned, sure Poe would forget about me after a few minutes and let me back to my sleep. I started to peel my pants off as the tapping grew more instant, the chant of “mustard” ricocheting around the narrow alley with growing insistance. Soon a kick against the wall joined in tandem to the tapping.

“Alright, fine, fine!” I got up, shouting “Balcony!” through the curtain before hustling out into the living room.

I snatched up a handful of feed and snapped the blinds open while the jeering condiment taunts followed my progress through the apartment. I had the glass door halfway open before I noticed a large shadow slumped across the floor. As if noticing my attention, it shifted and a large, yellow-tan head lifted, slow and dreamlike, to draw level with my eyes.

“MUSTARD!” Poe announced as a way of introducing me to the full-grown adult buck gingerly folded onto my sixth story balcony.

“Nope.” I murmured and slammed the door shut with a clear thud and resounding click of the lock. The buck regarded me with disappointment, a terrifyingly sharp rack of antlers tapping on the cross beams of the balcony above with audible patience in each click. I was a moment away from crawling back into bed to will myself into a different dream when I noticed the dark patches across its side.

I stepped closer and noticed a series of gashes drawn across the sun-coloured hide, deep enough to make my stomach turn with each breath of the great beast. It gave me an imploring look, its huge eyes begging me to help in whatever way I could. My thumb was already flipping the lock once more before I realized what I was doing.

“Nope!” I repeated and made my way back to my pants to retrieve my phone. While I had plenty of pets there was no way I would risk doing a procedure near a head full of daggers that I had no qualifications for. It took the dispatcher several long, confused rounds of questioning, but soon enough the building was surrounded by flashing blue and red as space was made for a crane to be brought in.

I stood across the street, shivering as I watched the crane loudly whine against the weight of the beast. Traffic still flew by as distracted onlookers watched a golden stag descended from the sky.

I looked up as Poe vanished behind the sudden, blinding glare of dawn with a hint of pride in his parting words.

I barely had space to consider them, though, as time suddenly came to a crawl. My vision bloomed with light as a boxy blue shape in my peripherals tried to veer back onto the road. A horn blared, filling the world with a drone that approached ever closer by the millisecond. I gave a tired little sigh as a buzz and siren cut through the momentary peace and I became swallowed in the light.

Bio: Busy with life and a broken brain, so chapter releases are a tad slow. I'm aiming for releasing a chapter every other Friday between my two active fictions (Ironically, my only isekai fiction is on hiatus until I figure out where the hell I'm going with it). Critique welcome, as I'm aware my style is a bit stilted and overly-wordy and my ideas half-baked.

Additionally, I am looking for any editing work. I focus primarily on flow and subtext analysis and only ask for exposure at this point in my career.

Please join my subreddit for release announcements and the occasional meme or billion.
https://discord.gg/J5r5GxBRv9

- I Will Be Everyone: Fully pants-ed episodic superhero story following a hive mind of infinite-clones who are too polite for world domination.