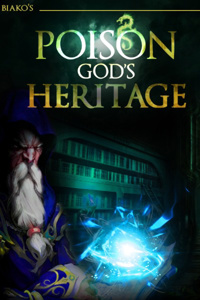 The three of us stood up and Xi Son didn't let us pay for our own lunch, we followed after him until we reached the city's pavilion.

With Xi son's identity as a high ranking noble married to an imperial consort, he has the right to access most of the Pavilion's floor, and when we arrived on the seventh floor of the pavilion, he took us inside to a small room where there was a small metallic bronze square placed neatly on the table.

"This is a bronze cube we found in a dungeon, we tried to refine it to no avail, and didn't manage to understand the inscriptions on it. It took me a great deal of time before I finally gave up and brought this to your eyes. Tell me if you see anything out of the ordinary."

The three master Craftsmen all went to the cube and began inspecting it, carrying it, and picking it up.

But I didn't move, I already had a vague idea of what this was, all thanks to the information the Poison God's book gave me.

Seeing my inaction, Xi Son looked at me and said, "You seem rather calm, do you know what is this?"

"Not really, but I don't wish to waste time. Presumably, you already showed this to many others before us?" I asked.

"So they definitely have notes, can I see them?" I asked.

"Right," the man said and handed me a ledger full of notes written by other people who had looked at this cube.

This whole book fiasco was nothing but a ruse I used, this would show that I was actually a bright move. It will show that I didn't want to waste time finding things other people had already discovered and noted in the book.

Once I went through the ledger, I went towards the cube, the other Craftsmen had already gave up, the symbols on it were too complex but it didn't have any seams or cracks that could be used to open it and uncover what's inside it.

The other craftsmen and Xi Son all paid attention to where my finger was going.

I touched the middle part of the cube, poured a bit of Poison Qi on it, then removed my hand, I then flipped the cube and did the same, putting just small bits of Qi in separate and random spots, but these spots were all inscribed with a small Qi gathering symbol.

Once all sides had been injected with Qi, the cube vibrated then jerked.

"Heavens! This is the first time this thing reacted!" Xi Son was actually impressed. This caused the rest of the Craftsmen to feel dejected but they were still excited to see what this box hid.

I relaxed and sat back down, not continuing any further.

"I can't open it, at least not right now, the box has a private chamber inside it that's locking the whole mechanism, it also reacts poorly to sunlight. It has too many receptors. It also needs a powerful cultivator to power up, at least someone above a Nascent Soul cultivator," I said my words, though the rest of the Craftsmen couldn't make heads or tail of what I said, Xi, Son smiled.

He understood the meaning behind my words, if one were to carefully deduce what I just said, they'll understand that I already know how to open it and would rather do it in a 'private chamber', and at night time 'without any receptors' as in any of the three people around us.

Xi Son was a cunning man and immediately understood what I mean, "Right, then I'll see what I can do, I'll inform you if the box was ever opened and I'll be sure to reward you all if we manage to find something special."

The rest of the group understood the meaning beind Xi Son, it was time for us to leave. And when I did leave with the group, Xi Son was fast and inconspicuous in hiding a jade in one of my sleeves, he didn't mean to spy on me but rather gave it to me to contact him.

I left the room with the three craftsmen as we discussed the cube and went down to the second floor of the pavilionn. The three asked me how I managed to unlock it, and I only mentioned that I came from a different place and I managed to understand some of the symbols because we used them, but actually those symbols are used by cultivators beyond the ascendant realm.

What is an ascendant treasure doing in a place such as this? A question I couldn't answer. But no matter the secret that cube is hiding, it's far too dangerous for any one of our cultivation realms.

Once we were in the second floor, where the craftsmen usually hanged out, I pulled out the gourd that Zian Yufan had gave me and began removing the old inscriptions.

Once all the symbols were removed, I began by editing and re-writing the correct sequence all under the gaze of the three craftsmen. They took notes and were all nodding at every symbol I changed.

"Amazing, to see someone with such immaculate accuracy in writing the restriction on the gourd leave much to be desired in our own experience." The oldest of the craftsmen Han Xiao said.

"Right, the precision is immaculate. I'm really jealous of how brother Shen Bao has a steady hand, you really are a dragon among the craftsmen."

"I only had more time in doing this," I smiled at the three while I continued writing the symbols as fast as possible, I didn't want to get delayed much.

Unlike a puppet that uses Spirit Stones to power itself, this gourd would use the Qi from the user that is riding on it to move, so I didn't need to have a lot of details written.

After three hours of diligent work, I managed to finish the gourd and handed it back to Zian. Who in return gave me the three Spirit Stones I needed.

The other two had also given me their own High-Grade Spirit Stones, and now I had five, exactly the number I needed for each and every slot in my Puppet.

Smiling happily, I left the room, thanking the group.

"I'll need to go back home, now that I have these stones, I can finish my project," I said to the three.

Thankfully, they were tact in not asking what I was working on, everyone had their secrets and no one was going to pry on mine.

Once I was home, I hurried downstairs, and pulled out my puppet, it had several dozen inscriptions written on it. Instead of the boring monotonous pink color of the puppet, the inscription on it were so numerous it looked like tattooed skin.

I had to dye the puppet, the dye will act as a coating to cover the inscription and will not hinder the interlaying works.

But before dying it, I needed to make sure this thing works.

I placed a single High Grade Spirit Stone in the puppet's chest and the whole damned thing stood up. It didn't even need for me to add the rest of the spirit stones. Thanks to the fact that I made the whole construction inter-functional, meaning that even if the spirit Stone on the Puppet's shoulder was the only one functioning at a time, it could send energy to the rest of the puppet.

This was great, the whole construct could work with just one High-Grade Stone, but I don' want to overtax the Spirit Stone, so I placed the rest of the spirit stones on the other spots.

Now, two high-grade spirit stones, one in each shoulder, another two, one in each thigh, and the main one in the chest.

The puppet was fully functional, but as it seems, the puppet started shaking, the energy from the High-Grade Spirit Stones was too much, it would probably cause the Puppet to blow up.

I immediately tapped on the puppet's head, re-arranging a few Symbols to have the puppet dial down on power consumption, the puppet only needed ten percent of the total energy coursing through it to function at full capacity. So, there was no need to exhaust the Spirit Stones for no reason.

"Good," I said then ordered, "X, punch that wall," I pointed. Not even a fraction of a second later, the puppet had already torn through the wall with a punch powerful enough that it shook the whole building.

And that was ten percent, and I could swear it was at least four times as fast as when I first saw this puppet in that cave.

"HAHAHHAHAHAHA!" I laughed like a mad man, seeing how amazingly powerful this puppet is, made my efforts, and the months I spent not go to waste.

Just as I was about to give it more commands, I remembered that it was midnight and I still had the jade in my pocket.

I placed it against my forehead and imprinted in it my location, then went upstairs and threw the jade out of the window.

It didn't take more than a few minutes before a man appeared in the front of my door.