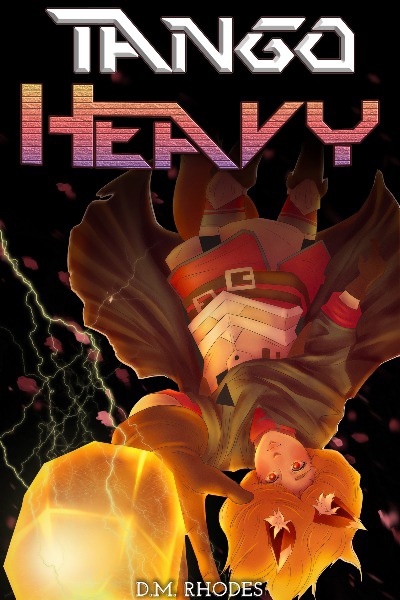 Sold to slavers from birth, a girl makes a final all or nothing bid to escape her old life and to chase her single dream or die trying in the attempt. Delving into a forbidden layer of the local ruins, she finds something unexpected. Something that will change the course of her life forever.

I can't remember reading any stories with mechas and litRPG elements, so I'm not sure what is so cliche about the concept as another review said... TANGO heavy is really unique and the way it's written makes you really feel deeply immersed.

Style. Style suits the story really well - even though the third-person present could require some time to get used to, as there are not many books written in it.

Story. Even though the author mentioned a slow start, this is the case only by webnovel standards, compared to most traditional novels it's not slow-paced at all. So far we get a lot of worldbuilding and highly suspenseful scenes - that is until Pen meets her destined companion and then clever dialogues and foreshadowing for the future events added to the story. The LitRPG elements are really unusual and don't distract from the plot.

Grammar. There are some minor typos and sometimes sentences are repeated (I'm not sure if it's intentional, though), but nothing immersion-breaking.

Characters. In the first few chapters, we can see the inner world of the protagonist - Pen, and how she sees the world. She's rather believable and likable. But characters start to really shine when Tango joins her after certain events. Their interactions are really entertaining to read.

In the end, I'd recommend TANGO Heavy both to those who love the LitRPG genre and those who don't. Give it a try for at least a few chapters until the main characters meet each other before deciding if you like it. :)

Reviewed at: Introduction 8: Heat of the Moment

Thinking about It, a girl having a mobile suit in a fantasy world is already something looks dumb without any given context without any context(But not as dumb as that In Another World With Smarthphone)

But what makes your story amazing, in my opinion is the characters and the flow of how the story goes. Only 8 chapters has been published but I can see that this story can go any direction It wants to. Be It psychological mecha like Evangelion, or Fantasy merged Sci-Fi like Gate or heck, even Comedy like Fullmetal Panic, because of the nice flow this story has... The endless possibilities of It are awesome. Normally, I don't like unspaced dialogues but I don't really mind It here. I can't judge your grammar because my grammar sucks, I hope you excuse that. Anyways, I'm looking forward to Pen's adventure!

Foxgirl Finds A Mech, more at 9

Reviewed at: Chapter 14: It gets better

BLUF: I'm not sure how to describe this one. It's a little tense, but mostly it's just a bunch of spelunking followed by walking around through the snow with mecha-friend. It can be a touching tale at times, but when the author says slow burn he really isn't joking. Some may find the high-volume prose to be very, very irritating, but it's also worth noting that thus far LitRPG elements are very light, at least as far as I've read.

Grammar: I noticed several cases of the author using periods where he probably should've put commas, but they were almost always in a way where the context tells me it's a stylistic decision more than anything else. Either way, the syntax doesn't really get in the way.

Style: This is my really, REALLY big problem with the story, and I had a lot of trouble deciding between 3 and 3.5 stars here. The prose is slow, deliberate, and takes its time to describe little things to keep the immersion and tension up. When he makes it stick, it sticks really well, but it feels generally cumbersome due to writing out details that the reader could safely infer  with other context clues as well as (and perhaps more egrigiously) constantly giving redundant details.  There's immense potential here, but I'd estimate that you could probably slice out anywhere from a quarter to half of the wording in the earlier chapters and be no worse off in description. This problem eases up in later chapters, but there are other cases where the unnecessarily volume-heavy text still overwhelms me. With just a firm haircut, this story could score an extra half star easily. The author's also pretty good about passively giving out little details about the world through dialogue, so that's pretty nice.

Character: We don't get too many, not that that's a bad thing. The mech's AI is actually pretty cool, and the personality and humor it shows is a very nice touch, but my problems lie more with the main character. She's relatively well written as a runaway slave, with some solid deeper psychological exploration later on, BUT there are times where she comes off as unreasonably short-sighted even within context and other times where she comes off as bipolar to a degree I found jarring. Doubts are fine, but flipping COMPLETELY between yes and no is a bit much, though perhaps this trait is amplified via collateral damage from the overwritten prose.

Story: We don't get much of a big, overarching story, but the bones of the story, narrative-wise, are actually shockingly solid, cranking up tension during earlier chapters, and just being a nice little story of exploration and character interaction between the girl and the mech later. We also get small snippets of worldbuilding via thoughts and character interactions that feel meaningful and contribute to adding 'color' to the story, for lack of a better word. The missing half star is due to minor pacing issues, even for a 'slow burn' style of story, but I strongly suspect this is just collateral damage from the prose.

Slow start, picks up at 5, takes off running at 8

Reviewed at: Chapter 11: Take it or leave it (MOUNTAIN TOP)

tldr: slow start but things really pick up from Chap 5 and becomes very interesting at 8. Honestly you can skim 1-4 without much detriment if you're really in here for the LitRPG and mech stuff!

I'd planned to read only a few chapters before eating, but I ended up only stopping for dinner at chap 10... so I'd say that's a good thing!

As another reviewer said, the "slow start" is generally slow for webnovel standards, but the chapters 1 to 4 before the protagonist finds the mech is still filled with rich prose and suspenseful, high-stakes situations. Still, it is true that many webnovels jump straight to the action, and though introducing dangers to Pen before she's in a giant fuck-off robot does do a good job of upping the stakes, you can honestly skim the first 4 chapters without much detriment. The nature of the protagonist's situation is illustrated pretty clearly in Chap 1, and the other 3 kind of just add detail.

Which is why I stated earlier that if you're into this kind of story with LitRPG + mechs, you should stick around till Chap 8 to get a good feel of the story's tone and style, and skimming the first few won't hurt. To the author I'd recommend trimming the first 4, if only because it would be a shame if readers were turned off the story really picks up.

As for grammar, there are some run-on sentences and sometimes inconsistent indentation on the first line of the paragraph. Personally I feel it sometimes distracts from the flow of the story, especially in the prose-heavy beginning chapters, but it gets much better when more dialogue comes in as TANGO is introduced. And overall, 95% of the story is grammatically sound.

For characters, I'm personally a sucker for the downtrodden I-came-from-the-slums type of protagonist, so my opinion may be biased on that front when I say I find Pen's characterization and desperation to improve her life believable + interesting. However, it's when TANGO starts talking from Chapter 6 onwards that the character dynamic really starts to come in, and who knew a mech could be such a cool (read: pushover) dude?

Basically, if you like tables and you like robots mixed with a fun character dynamic, you'll probably enjoy this one!

Unlikely Friendships for the Win

Reviewed at: Chapter 20: It Howls

This story sticks to some tropes I've seen before, but presents them in a fun and original way. I didn't expect a lot going into it, but ended up reading the whole story (so far) in a single day, so it's oretty good!

I find stories written in this tense difficult to read, but once you get into it and past the slow start, it's not too bad. Word choice is solid, and there are a few oddities like abundant use of "no rest for the wicked" as a saying, but this isn't necessarily a bad thing. Disrupts the flow, but also breathes the author's sense of humor into the piece.

The pacing is solid. I'm an impatient reader at times, so the slow start was difficult to stick with. Once you're past it though, the author does share information at a really good pace. There's a good blend of action and interpersonal interations, and you can really connect with the two main characters. The plot should be interesting as well, as that continues to progress.

Some mild issues throughout, like small words occasionally missing or some redundacy, but does not impact readability. A solid edit would clean up these minor issues!

I  do like this aspect of the story. At the beginning, and during certain scenes both characters occasionally seem forced or one dimmensional, but this is clearly part of the author's plan. Overall, they are both portrayed quite well, and I was able to emotionally connect with both their stories. Looking forward to seeing where they go from here.

Present tense in narration is bad.

Alright, so this caught my eye because Mecha, but I couldn't even get through the first chapter. The entire narration is in present tense which is clunky to read. The story might be good but the way this is written right now just puts me off.

Also I recommend the author remove the Japanese light novel lite altenate title in the synopsis it made me skip over the story two times before I forced myself to give it a try. (This is a minor nitpick to fit the 50 words minimum)