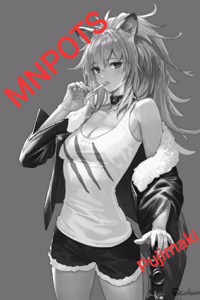 Mc's not part of the story

Chapter 80: GIVE AND TAKE

"Eh? I thought she was in HA. Did I make a mistake? Now that I see it, she doesn't have an emblem. "

Mikael was watching the fight, he ordered Seven to leave early because he wanted to watch how strong the woman was.

He's curious, the woman gave him a skipping beat. Something was driving her to see Furrneka.

His lightning, it's wrecking inside him. His Skills wants to break inside him. He had experienced this before when he was shopping at the Dungeon Market and saw a simple stone. That stone gave him a Passive Skill.

That's why he was curious about Furrneka, he wanted to know the reason why his lightning was crackling.

He watched the whole battle and he realized the woman was at a disadvantage. She had two opponents so it was obvious that she would lose.

"Should I help her, I don't know the rules of beast people. She might get angry if I help"

Furrneka used her claw and slashed the Hunter but his partner help him and kicked Furrneka.

Furrneka plummeted and hit a tree. The tree was broken by the force of the kick.

She coughed blood, the attack ruptured her inside. She tried to stand up but another attack hit her abdomen.

Her body flew and roll to the ground. 2 vs 1 is an unfair fight. She couldn't defeat them if she didn't use her full power.

A black lightning Serpent came out of her body. The snake coiled around her.

Mikael who watched was suddenly startled, the black lightning made his heart beats faster.

His lightning flashed out voluntarily, and he had no control over it.

Furrneka was covered with black lightning.

Furrneka unleashed a lightning speed. She wielded her claw and hit them. Extreme speed, within milliseconds, her two opponents were bloody and unconscious. It was fast.

Furrneka wanted to stab them. She came closed and lifted their heads.

Mikael came out, it's not good for her to take their lives. The two were members of HA. Any person would severely be punished if they found that you have killed a member of the Association.

Many strong people would hunt her.

The Black Lightning Serpent came out of her body. It was crazy and seemed to want to go to Mikael. The Serpent entered Mikael's body and he felt a power erupting inside.

Furrneka got angry and tried to hurt Mikael, but she failed. Her injury was fatal, many of her bones were broken in the fight. She couldn't d move.

Black and White Lightning came out of his body. The two lightning emerged for minutes before dividing.

And the same thing happened with the Black Lightning Serpent, he took the armor penetration and exploding characteristic of Mikael's Lightning.

"I gain another passive skill. I've become faster and the color of my lightning become black"

Mikael was surprised, it's like give and take. The two Lightning gained each other's characteristics.

He turned and saw Furrneka unconscious. She fainted and lay on the ground.

He opened his inventory and took out a high-class potion. He put the potion in Furrneka's mouth. As for the two Hunters ...

"You can have this low-class potion. The only important thing is that you stop bleeding"

He left the two men. Someone would see them too, or they would wake up themselves. Yup, he gave special treatment when it comes to women. He was a gentleman when it came to this thing ... Though it depends.

He carried Furrneka. She needed treatment and rest.

He took her to Seven's apartment.

Furrneka's ear began to move. She opened her eyes and she saw that she was in an unfamiliar place.

She tried to get up but her body was staggering. Her body was weak and unable to move properly.

As she wondered where she was, someone suddenly opened the door. Adalyn was holding food, she wanted to know if the woman was in good condition.

Furrneka put her defense, she was surprised when she found out someone was coming.

"Oh! You are awake. Brother Mikael! The cute sister is awake!"

Adalyn was happy because the woman who Mikael brought was fine. She went out and called Mikael, Seven was not in the apartment because he still had work to do (sell Items).

Mikael came and entered the room.

Furrneka remembers what happened in the dungeon. Her Black Lightning Serpent merged at his lightning after that, she lost consciousness. This man stole her Skill!

Support "Mc's not part of the story "