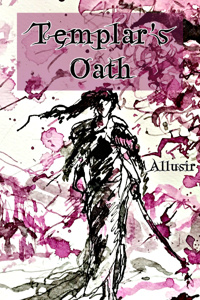 “Who dares disturb the sacred mountain of Tuatha Dé Aynia?” Dense sheets of silver scales shielded every spot of the massive dragon looming over me.

“I am Arlyn, templar knight of the Holy Luvius Empire, ordained by solemn oath in the service of the trine goddesses.” My voice trembled, despite my grand words.

“And what does a knight sent from the blood soaked empire seek here?” Jets of fire burst from the dragon’s nostrils as it sneered in contempt. Mighty talons showed their displeasure by biting into the boulder the beast sat on.

“The aes sídhe Glyn Dhu will die by nightfall. I do not have the power to save him so I seek the blessing of the Lady of Light to restore him.”

The judging gaze of the ancient aes sídhe paralyzed me. The wrath of her tone filled me with awe and fear that took my breath.

“Why do you hesitate knight? Have you already killed so many that you lost count?” Intense heat radiated from the stream of flames that poured out of the beast’s mouth toward the clouds.

“Tristian Conghaile, one of the wolves of Osraighe. He was part of a pack that slaughtered a village near the border. The Witch Enid and Tamhas Deòir, her human husband, together they cursed and butchered over a dozen children in the capital city.”

The flames ceased, and the dragon focused her gaze through my eyes and into my soul. After a deep breath, I continued my list.

“Two human bandits, Seathan Gall and Lìos Torcadall, that murdered travelers for money and fought to the death rather than go to prison. The Cat Sìth Yseult, responsible for several deaths in Wicklow and for cursing many others. Weylyn Faolain, Pert Duinn and Kirwyn Duinn, three wolves of Osraighe who attacked the people they lived with every day over the years. Duke Morfran, guilty of atrocities beyond count.”

The intensity of the her gaze softened. The silver glow faded into a peaceful azure as tension drained from the dragon’s muscles. The paralyzing pressure around me dissipated, almost causing me to collapse to the ground.

“Why remember the names of those you have killed?”

“I took an oath to serve the weak and innocent, to never be blinded by hate or greed, and to always adhere to the cardinal virtues. Sentencing someone to death without even knowing their names would go against that vow.”

“There hasn’t been a true knight to walk these lands for nearly three centuries. You have won my admiration sir knight.” The dragon gave a bow of her head, which I was quick to return.

“Will you allow me to pass?”

“Though I humbly request peaceful entry to speak with the goddess, if that option is taken from me, I will be forced to continue regardless.” I could only hope my honesty and humility would grant me passage without a fight.

“You would risk your life for a fairy?”

“Would you take my life to fulfil your quest?”

“I would raise arms against any attacker that threatens my life while I seek to follow the path laid before me.”

“Is that so sir knight?” The dragon laughed. “Do you really think you have the strength to force your way past me?”

My hand itched to grip my sword, and instinct screamed to run. Shoulders back and chest high, I chose my next words carefully despite encroaching dread.

“No matter how outnumbered I am, I will never surrender. Victory comes from the blessings of the trine, not through force of arms.” The oath, like my prayers, was a source of courage. My lungs filled with air slowly in an attempt to quell the rising panic. “I would rather die here than break my oath.”

“Well said sir knight. Let us see your conviction in practice.” The dragon’s armored tail rushed toward me without warning. My tumble to avoid the blow was less than graceful, but I managed to get back on my feet at the end of it.

Talons slashed at me, narrowly missing each time. My sword left its sheath and struck at the talons as I dodged back and forth. My slashes connected, sending sparks flying each time iron met silver scales yet leaving no scratches.

A more nimble roll avoided the next sweep of her barbed tail. I thrust my sword in the air as it passed over me, hoping to use her own force against her. The spark was blinding, and her roar deafened the world around me.

The savage dance continued for ages, until bruises covered my sore muscles, and scrapes covered my bruises. My ragged breath heaved painfully in and out of my chest. Still I had only managed the one scratch to the dragon’s tail. A mistake she did not allow to happen again.

I reached down into my soul, searching for the wellspring of flames. Fear coursed through me as the dragon inhaled deeply. I followed the tendrils of despair until they slammed into a seed of courage, which feasted on the dark emotions.

A blazing pillar spewed toward me. I concentrated on the seed until it grew into an inferno of its own. Silver flames wrapped around my skin and clashed with the oncoming blaze. My concentration broke under the intensity of the blast, and the moment the dragon flame stopped its assault, my own flames shattered.

Another wave of talon slashes ripped at me. Whenever the silver flames reached the edge of kindling, another step in our dance would interrupt. Each slash and charge kept my focus on the outside world, but with each dip inside I drew closer to the flames.

The Oillipheist’s lungs swelled once again with air. A bout of silver and crimson flames raged around me until both vanished. Before the next onslaught could strike, I called the sacred flames to encase my sword.

“Enough,” the dragon bellowed. “You have proven your worth Sir Arlyn.” Black spots dotted my vision. My lungs could only groan for more air as I tried to talk. “Tuatha Dé Aynia awaits you.”

Bio: Allusir is a professional editor and flash fiction fanatic with a love of all things fantasy. His shorts have won a number of online fiction contests and are featured on a local LGBTQ+ blog. He lives and works alongside his husband from their small apartment in Taipei, Taiwan.