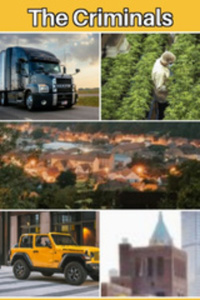 Alex Rodriguez... A guy in his 20s who has finished high school a few months ago, and who was about to be arrested for drug trafficking and car theft, but he hadn't done this stuff on purpose or to make money ... Okay, most of the time he did that, but in most cases, he resorted to these crimes because he needed money to secure another day in this world. Of course, the money he earned was dirty, but he still did it because nowadays, money remains money, whether it is clean, dirty, or counterfeit.

At the moment, Alex gets out of the taxi that helped him get to the docks, where he will talk to a Japanese man who is part of the famous Yakuza gang. Alex takes a few steps forward, until two individuals, who are dressed in costumes that only the Yakuza clans would wear, and with a katana sword behind them, a weapon specific to Japan and its warrior culture. Those two Japanese men were looking at Alex ferocious like they were lions and he is a good looking food who is vulnerable at attacking.

"Introduce yourself, citizen!" says the yakuza man in perfect English to Alex, which is looking quite scared because everyone is afraid of Yakuza nowadays.

"I-I am Alex Rodriguez, I came here because someone has called me," says Alex being honest, and the other yakuza guy came closer to him which is making him feel quite uncomfortable.

"Is Alex Rodriguez your citizen's name?" says the other yakuza man who is also speaking in perfect English.

"I understand." says the yakuza guy who was looking at Alex and then he left him to take a breath. "Now follow us, because our boss is waiting for you, citizen."

"Alright," says Alex starting to follow those two guys who are guiding the way for Alex Rodriguez to talk with their Yakuza boss, which makes Alex feeling quite nervous because this is the first time he will talk with someone important.

After a few seconds of walking, Alex arrives in front of a container that has been turned into a house where some employees sleep, take breaks or sit to play with the worm they have between their legs. The yakuza members, who escorted Alex, enter first because they have to be careful about the fact that this dude could bring bad news for their boss and which could result in their deaths or worse, getting the dinner of the yakuza tiger, bear, or lion which belongs to the boss.

After a few seconds of walking, Alex arrives in front of a container that has been turned into a house where some employees sleep, take breaks or sit to play with the worm they have between their legs. One of the members of the criminal group, the bald man, tells Alex to enter the house, and he enters without saying a word. When he entered that container, he noticed something that would amaze everyone. In that container is an office that is new and shows that he was brought here a few weeks ago, some motivational posters with yakuza clans, an alligator that is tied like a dog to an extremely useful chain, and at the office is the boss of Yakuza clan from Criminal City.

The head of that clan is dressed in a classic yakuza suit; he has blond hair on his back with an excellent hair gel, a two-centimetre scar on his right cheek, green eyes, a few facial hairs on his chin, and he has a ring on the middle finger, which could mean that this guy is married to a woman because he doesn't look like being a homosexual.

"Alex Rodriguez is it?" asks the Japanese guy who controls a yakuza gang in this criminal city.

"Yes, sir," says Alex feeling like he was called to the Principal for doing something bad at the high school.

"Good. You see. One of my men, came to the abandoned place last night and they let you free instead of killing you, and do you know why we did that?"

"Is because you could be useful for us... We did a little dig in your past, and we could say... You wanted to escape the criminal life, but the question is... Why you came to this criminal city? Didn't you have a better place to live than here, where everyone is fighting even for the smallest things like women, foods, cars, money, respect, or appreciation?"

"This was my on-only chance... I could've gone to other places but I do not have enough money to do that."

"And you wanted to gain the money and leave this place forever?"

"Y-Yes... That is the plan eventually." lies Alex because he plans to remain here for other reasons which cannot be revealed right now, but at their times.

"I understand the plan. But, you cannot leave this place until you will help us gain what we needed it because, outside of this city, we can gain you a new life... A better job, a better home. Fuck! Even a better woman."

"I-I accepted sir." says Alex which is having right now a "Deja-Vu" feeling while he accepted this job.

"Now. You just have a single job, and this one could help you and us. The job is simple, you have to be my driver for a few weeks."

"Huh?" exclaim Alex which is feeling kinda relieved he is having that type of job where he has to kill someone innocent into the acid.

"My driver is on a vacation and I needed a driver with skills, and you, got some quite good skill while you were driving a truck for the first time."

"Yakuza secrets!" says the boss to Alex. "Oh. While you are working with me, it will be better to know my name."

"My name is Minoru. Just Minoru."

"I see... I could introduce myself, but you already know my name," says Alex smiling, and the boss was silently laughing.

"Alright, alright. Now. We have to go somewhere, so be useful and take those keys." he handed the keys to Alex.

Alex takes the keys, which looks like they are the keys to a car and this place. The Minoru and his co-workers leave the building first and they are heading to their cars, but the alligator remains in the building. The alligator was looking quite hungry at Alex and he decided to left this "cage" as fast as he can. When he left the building, he locks the door of this container which looks like a house or a Yakuza boss's control room. After he locks the container, he goes to the car which the boss was sitting on the rear seats together with an associate of his gang he controls.

Alex enters the driver seat; he turns on the car with the radio stopped and he is driving from the docks. When he left the docks, his boss which is working for now told him.

"Deliver us to the Pier."

"Of course," says Alex to his boss not questioning why did he wanted to go to the Pier with his members of the gang, obviously not to fish or to get into the big wheel, tunnel of love or to take a photo in weird scenarios.

Bio: Writing cannot be graded, it is an art.

I also have a Webnovel account where some of the stories I am posting here are somehow finished or on serialization. The link is this one: https://www.webnovel.com/profile/4311650220?appId=10