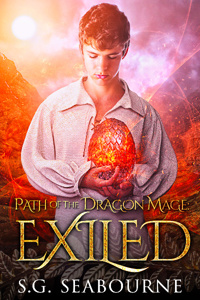 Path of the Dragon Mage: Exiled

Interesting start so far! Early days as I'm only on the 4th chapter but the story is well written, and the premise seems interesting!

The main character seems realistic, doesn't suffer from being either far too confident/smart for his age or a total wimp like many of the genre fall into.

Look forward to seeing where this goes!

I am reviewing this at 16 chapters in and the only bad thing I have to say is that I am mad there aren't more chapters. From the point, I started reading I couldn't stop until there was nothing left. The litrpg elements are handled in a creative and new way that is familiar enough to scratch that litrpg itch but unique enough that it separates itself from all of the others. The characters are interesting and compelling and the plot is shaping up to be a fun ride. I have really high hopes for this story.

It captures the same feeling of wonder that eragon did when I first read it. And though we haven't been introduced to the dragon as of yet, the prince and his supporting casr of characters are a joy to follow.

Competent, well put together writing, and arguably great groundwork for what promises to be an interesting lit rpg syste..

tldr: I like it, give the first few chapters a try.

The fancy cover caught my eye, thought I'd give it a read. It's fun, clearly going to be a The Chosen One Saves The Kingdom kind of High Fantasy book. The GameLit elements are strong, after a certain point in time dang near everything become a Skill for out hero.

Grammar is good, with a couple of errors that don't really disrupt the flow. Characters are flawed, and everyone has a secret. Or more.

How To Take Royal Road By Storm

After starting off strong with his first fiction Colonize, S.G. Seabourne has returned to enthrall readers with a gripping tale of magic and political intrigue. With The Bastard Prince, the author has taken a classic formula and executed it with a high degree of skill—and then added an additional, compelling twist.

We begin the story by following Corvus, a noble youth seemingly without magical ability. His personality has been shaped by social rejection and feelings of inadequacy, and the author is meticulous in emphasizing this, as well as in depicting the dysfunction of his politically scheming family. With only a dormant dragon egg in his possession and the mysterious text of a system that appears before his eyes, Corvus soon finds himself thrust into unfamiliar circumstances that put his wits and resourcefulness to the test.

Many writers would be content with this tried-and-true structure for their story, but our author has some surprises up his sleeve. The inclusion of seemingly anachronistic terms like “photosynthesis” is clearly calculated, and indeed the story’s VR tag indicates that Corvus’s fantasy world is not as straightforward as it seems. The nature of the story’s system remains mysteriously unexplained, and we have no doubt that the LitRPG elements will play an integral role in the narrative. One minor issue keeps us from awarding a full five stars in this category (spoiler for chapter 8):

The MC learns how to use magic in an anticlimactic way, with the knowledge he needed for a breakthrough being handed over on a silver platter. A major development of that nature deserved more buildup and effort on his part.

The author has an engaging, eminently readable style, varied in its imagery and competent in its descriptions of the protagonist’s thought processes and emotions. Without relying on flowery or ornate language, the author is also capable of crafting strikingly vivid scenes, as can be seen in this description of the king using magic:

There was no warning. The wall that separated the antechamber to the royal receiving room simply melted away as if the stones were made of soft wax. The stonework, marble, and the golden filigree puddled to the floor like liquid and ran in rivulets...

On the other hand, half a star has been deducted because a number of sentences are slightly awkward, or require minor tweaking; for example:

The violently pink egg was cool to the touch and inert in a way he couldn't quite explain. Like touching a stone statue completely without movement.

This sentence is perfectly understandable, but doesn’t feel quite right because “violently” should be “shocking” (a shocking pink) and the phrase “stone statue without movement” is a little odd, as it can be taken to imply that statues ordinarily do move. While little issues like these don’t come anywhere close to spoiling the reader’s enjoyment, they do crop up from time to time.

As for the story’s Lit-RPG elements, they are judiciously employed and clearly one of the story’s strengths. They are well written, appear when appropriate, and are not used as a crutch to compensate for proper story telling, or as superfluous padding to extend chapter length. Essentially, The Bastard Prince is a hybrid story, midway between a conventional fantasy and a Lit-RPG. Thus far neither aspect outweighs the other, and the result is an agreeable read with much to appeal to fans of both genres.

The author does, however, have to make sure he preserves this healthy balance: in a recent chapter, the protagonist kept himself from weeping, which promptly unlocked the skill, “Emotional Control.” This may be a little excessive; our fear is that if “not crying” is a skill, the MC’s profile and skill list will quickly assume daunting proportions as the story progresses and more and more abilities are acquired. So long as this pitfall is avoided, the story will remain stylistically appealing up to its conclusion.

The author favors simple but functional sentence structures, and he is diligent in keeping the story’s tense consistent. On the other hand, there are a few niggles to point out: punctuation is occasionally missing, some commas are superfluous, and typos are not an uncommon sight. These issues are becoming less and less prominent as readers point out mistakes and the author fixes them, but it does mean that the story’s early chapters are generally smoother reads than its latest releases.

Though the involving narrative will understandably draw and retain the interest of most readers, we must also make mention of the story's commendable characterization. The protagonist is convincingly presented as a self-doubting, well brought up noble youth, with whom we can readily sympathize. The product of a troubled upbringing, Corvus is clearly lacking in self-confidence, but not to a wearisome degree, and his character arc promises to be significant. Accordingly, we look forward to seeing his growth as the story unfolds.

As for the rest of the cast, some side characters (such as the MC’s father) have received less development than others, but there are hints of underlying depth. Many of the characters speak to Corvus with ulterior motives, and there is an ambiguity behind their words and actions that will keep readers wondering what twists and turns lie ahead in the narrative.

In terms of tone, from the royal Aunt Sunli to the rough-speaking Solt and the commoner Gwen, every character possesses a distinctive voice and we have no difficulty keeping track of who’s who. Where the author can improve is by accentuating class differences; though the dialogue of nobles and commoners certainly differs, the effect could be strengthened by making peasant speech more dialectal, or noble speech more elevated.

The author has laid an excellent foundation for a highly entertaining coming of age story. A must for LitRPG and fantasy fans alike!

This story is just starting out, and already the main character has a well developed personality. The story is exciting, but also even-paced. The idea of several different types of magic working together in the same world is quite intriging. I can't wait for the dragons egg to hatch! - - - -

The story is fantastic so far ( chapter 13). The character are well written and the scenery descriptions are great. I really like the take on the whole Litrpg, where he doesn't really know about it and he's the only one that has acces to it. Definitely looking forward to reading this, and would definitely recommend.

Excellently written, too much RPG

I absolutely love the beginning of this story: it has the feel of a genuine high fantasy, without any of the unnecessary meta commentary that liters fiction on this site (for example, the overused evil nobility trope). Very well written, with interesting characters, etc.

Unfortunately, the direction the story is currently going in seems to be that of a heavy litRPG. While RPG stories, with 'systems' and all that, are not necessarily bad, they ARE extremely niche, and heavily rely on tropes from videogames. And I'm beginning to worry that the RPG system in this story is becoming awfully intrusive.

TL;DR: This story could be something quite incredible, but the increasing use of RPG jargon and tropes, as well as the intrusive system ("skills" for every little action, damage notifications, etc.) are severely off-putting. Just for the first few chapters, the story deserves a high rating, but I'm not sure if I will personally continue reading or not.

When this story first showed up on my list I was honestly skeptical. It's not often you find real gems on here anymore. Still, it wasn't there when I checked yesterday, so I figured something about it must be worth the trouble. I find myself now saying that, so far, this fic is off to a surprisingly excellen start.

Tldr - Enjoyable and an easy read.

Interesting start so far and has all the pieces to make a great story as it develops. It is well written and has been consistently updated which is always a hugh plus in my book. Still early in the story so I am looking for more detail and world buildiung. I am excited to see how the author develops this story.