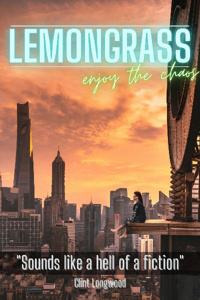 I sprinted across the battlefield. jumped over rubble, slipped under huge mecha beasts, I dodged the stray Thunderbirds the best I could. Despite my great efforts, the enraged snake got closer and closer. Deep down I knew it was futile. But I won’t go down without a fight, especially not against mecha beasts. I promised that I will get stronger. I swore that I would get back our land and I will do that!

A refreshing verdant power was filling my muscles, easing the pain and replenishing the energy to an extent. Did my spirit activate? So halfheartedly!

My instincts noticed a stray attack even before my eyes could perceive it. I tried to block it only to remember that I was carrying the metal briefcase with my right. It was too late to stop the movement though. I already expected the case to explode but strangely nothing happened at all. Weird. Were my instincts wrong? This shitty situation made me all nervous.

I avoided any noisy cop on my way out. The city police were setting up defensive perimeters at the exits of the station to stop any beast from entering the city proper. They individually couldn’t protect me also even if they could I’m not sure if they would. So I just ran out of the station onto the streets of Earth Gate. The battle did not reach the streets, yet. But they were uncharacteristically empty. I’m sure some kind of evacuation order was in place.

I still had no plan what to do. Flee to the dorms? Hide under my blankets? Even if I miraculously reached Sympathy before the serpent caught up to me, I would endanger everyone who was in relative safety. Fighting isn’t an option either. So hiding it is. Luckily, the city was full of maze-like backstreets and dark crevices. I needed to hide until an immortal of the administration showed up to make snake-shashlik. The first sketchy alley I remembered was the one the crazy beggar came out of.

I’m not sure why I hoped the old beggar to be there but in the end, it didn’t matter. No soul in sight. I swiped the sweat from my brow. The serpents’ stare was unbroken. That thing really did lock onto me. Maybe it got bullied in mech beast preschool. All the little machines called their mother laundry machine. Only such a traumatic experience would explain its unreasonable fixation.

Deeper into the dark alleyways I found a whole lot of nothing. The snake was now where I met the old man who gifted me Leafy. Oh Leafy, I’ll never forget you. Rest in peace. Two pathways were in front of me. Both didn’t look promising. Yep, I’m screwed.

Just when I decided to take a random path a voice whispered to me: “Get down here! Quick!” The sound came from an inconspicuous manhole. Now, at this point, you should know that I couldn’t withstand weirdness, especially when it was a chance to save my hide.

I approached a bit hesitantly: “Hello?”

“Save your ‘Hello?’ and get the fuck down here!”

The manhole noisily opened. Filthy red locks were greeting me from below. Bright blue eyes were directing me to follow. Well, it can’t be worse than a gigantic snake, right? I threw down the mementos I picked up earlier and started to climb down myself, following my short-fused rescuer.

She already reached the bottom and turned on her electric torch. Before I even thought I’m saved I made a mistake. Stupidly, I forgot to close the manhole. At the half-point down, it came back to bite me. A giant mechanical eye was looking through the opening, staring into my soul.

It was still maybe four or five meters to the ground. I had no choice. Here goes nothing. I jumped but I landed badly and sprained my ankle. “Ouch! Fuck!” I winced.

I grabbed the leather bag and the briefcase and hobbled after my last-minute savior. Thankfully, I traveled light. I had spare clothes at my aunties so I needn't pack anything for myself. My holo-ring was all I wanted on long trips.

The shaking ground brought my full attention back to the situation at hand. Some pipes on the walls started to burst. An earthquake? No, the snake bashed its head against the entrance. I frantically apologized to the reptile: “I’m sorry I called your mom a washing machine. I know some high tech ones. They do the laundry, the dry, they even fold your clothes nowadays and best of all, they are connected to the holograms so that you are entertained at all times. Everybody loves them. I personally adore them. It was a compliment, I swear.”

I smiled nervously. The serpent stopped for a moment and then shot its laser down the shaft. I barely dodged!

“I take it back! Your mommy was a cheap washing machine only used for the dirtiest of underwear! And your father was a vindictive vacuum turned on the reverse!” I shouted into the dust before being dragged away. The snake still tried to breakthrough. But it would never fit into the narrow tunnels of the canalization so we jogged only for a short while before resting for a moment.

“Do you have a deathwish!?” The curly-haired woman spat at my face.

“You know, I’m asking that myself every day”, I answered maybe a bit too honestly, “thanks. For saving me, I mean. I’m Meadow.”

She punched me out of the blue and rammed her knee into my stomach. I nearly spit my guts on the wet tiles. “Huh!?”

“That was for nearly killing yourself”, she proceeded with a backhanded slap, “And that just for fun!”

What was going on? Why? What did I do?

“Don’t look at me so confused. Did your parents never teach you to not follow people into the dark parts of the city? Demonic cultivators are everywhere!” She smiled. Her rotten teeth exposed. A foul stink was accompanying her whisper: “I’m one of those.” A burst of manic laughter was echoing through the cramped tunnels.

How do I always end up in such fucked up situations? Right, I cursed a snake and followed a weirdo into the underground. I'm starting to think it might be entirely my own fault. If I would have been a bit warier I might have fought back.

“What... “ I started to ask. The curly demoness bound my hands with an iron contraption.

The woman whom I thought my savior giggled while restraining me: “Handcuffs, of course. Never saw them? Your boyfriend must not enjoy his life then.”

Boyfriend, huh? Never thought of me as the type to be into boys and dating. But her betrayal made me feel lonely. I really had no one to rely on. Every mistake I made might be the last one. This very well might be exactly that. No one will save me.

She put the leather bags handle into her mouth and picked up the briefcase which I must have dropped while I was beaten. She didn’t even bother looking into their contents. But to be fair, I didn't either. She must have not felt quite safe. I wouldn’t either with an ongoing mecha beast invasion above us and a giant snake only a few hundred meters behind us.

With her free hand, she grabbed my organic arm and dragged me deeper into the tunnels. We walked for quite a bit. With the leather bag in her mouth, there wasn’t much of a conversation going. But I think she laughed at me when I got scared by a pack of rats rushing by us.

After a while, the number of pipes reflecting the light of the torch got less and less, until they faded out completely. We reached a dead end. Only an old grate allowed the sewage to flow unhindered. My kidnapper stepped into the sick looking water without a hint of hesitation. She pulled out the heavy looking metal and pulled me into the water and beyond the grate. After climbing out the mucky canal she made no effort in drying herself, therefore I wasn’t allowed either. It got cold real quick.

We were at a crossroads. The sewage was happily flowing wherever it ended up on the left and on the right was a narrow passage. We went right. The tunnel looked like it was carved out of bedrock. My wet shoes squelched on the gravel which replaced the last tiles which indicated that we were still in civilization.

We were marching for so long that my bruises nearly healed. I still acted the part of an injured person, though. Couldn’t show my card right now. I had to wait for a possibility to ambush her or hope that she would open the handcuffs at some point. I was at a disadvantage, no that's wrong, I was screwed. I was damned if I do something and I would be damned if I wait. Who knows what was waiting at the end of the tunnel. I didn't think paradise was waiting for me.

Of course, I was right.

Two huge torches lit a giant gate in the darkness. Instead of being just two simple doors, it was a huge tongue bearing demon anticipating our arrival.

Maybe I should've tried my luck with the mecha-snake after all, it seemed nicer. 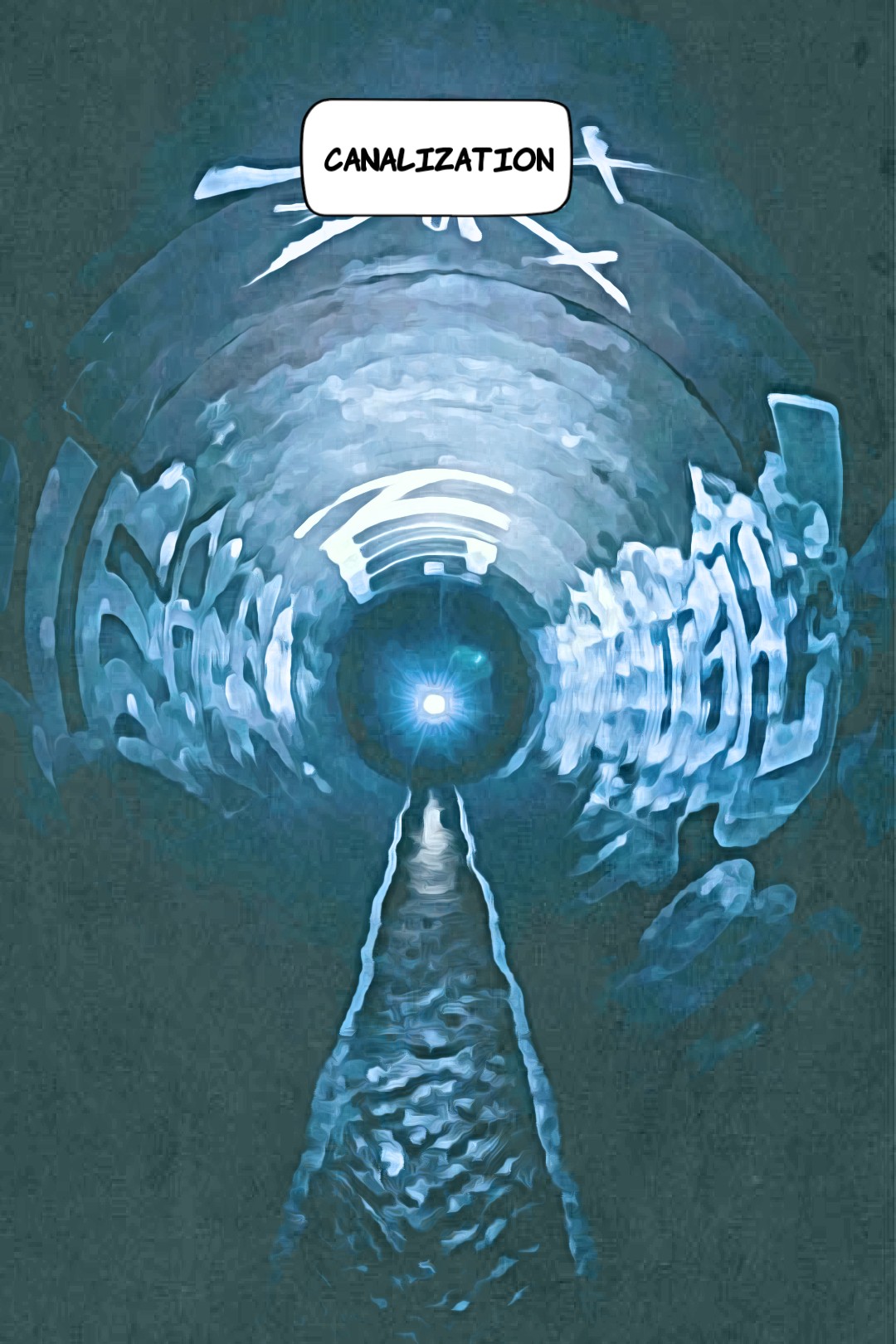 A note from Kevin Huynh

From the frying pan into the fire. No plot armor for poor Meadow.

What did we learn today? Don't go with strangers into the canalization

Support me by rating and writing a review. It really helps.
Also if you want more rambling, then follow me on social media. You can find me on Twitter and Instagram under @thewritingbirb

Bio: I was once writing Birb. I ascended to a human being.