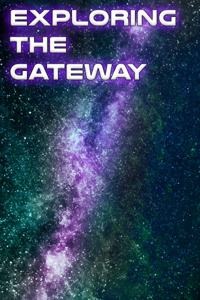 Join John Miller as he's introduced into a fantasy world that exists parallel to our own when he is given game like powers by a mysterious god. Once he finds his footing in that world, he quickly finds himself delving into the Gateway. The Gateway is a portal to worlds which are all linked to one another and through it to earth. Each are unique in their own ways and contain different types of creatures, magic, and technology. Along his journey to explore it, he finds himself dealing with political intrigue, moral conundrums, and the complexity of human nature with a team of varied characters both with and against him.

Updates every Sunday (10 AM GMT) and Wednesday (6 PM GMT)

Inspired by CHYOA's the Gamer story.

I would love this if John was older

Reviewed at: A date with Alice

Overall: If you are looking for another system novel and are find with a cast of teenage main characters acting like teenagers then give this a read. Advanced review criteria below the spoiler.

John is a teen so him acting like one makes sense. At the same time I am spending chapter after chapter watching him make the same mistakes over and over again. I am watching him act without thinking, go back on promises he made to people he cares about, tell people way more information about himself than he should.

I read 15 chapters in before I felt the urge to look ahead to see if he had changed. I was dissapointed to see that even after 40+ chapters he was still acting like an angsty teenager with poor decision making skills.

I don't expect him to suddenly become a genius, either intellectually or emotionally, but I felt like 25 chapters should have been sufficient for him to

- Style: Overall good. Nothing stuck out that would elevate this to great but nothing really detracted from it either. The images denoting the system prompts/dialogs are a nice touch.

- Story: Again overall good but I had to dock some points since it is extremely easy to draw parallels between this novel and the chyoa version of 'The Gamer'. This is further hurt because when 'The Gamer' (web comic version) first came out 'system' novels were not mainstream. Now that they are the concept can at times feel like a lesser version of more innovative stories.

- Grammar: Nothing glaringly obvious stuck out in this area but I make it a point to basically never give 5 points as I am so inundated with bad writing that I hardly notice mistakes anymore.

- Character: This is where my complaints come in. The characters often feel flat and lack growth as characters. Sure they may grow as stat sheets but it doesn't feel like their personalities evolve through their trials and tribulations. Unfortunately this is something that is extremely common in new writers. Writing characters that have visible growth takes experience that needs to be built up over time, both through the author's life experiences and through the art of writing itself.