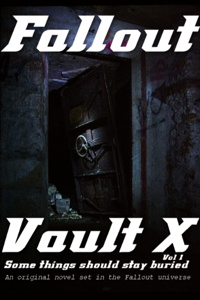 An original novel set in the Fallout universe, written to be accessible to all, featuring unique people and places. Vol.II. out now

Fallout: Vault X tells the story of John. A vault dweller, who spent every day of his twenty five years underground. Like his father, and his father before him. Proud to live in the last remaining bastion of humanity, all that survived The Great War of the atomic age. Hidden deep below the surface of the earth, toiling under brutal conditions. Year after year, decade upon decade. All to expand into the natural cave system the Vault occupied, building for the future. However, John knew what his forefathers did not, that everything he’d been taught was a lie.

After finishing school at the age of ten, John received his standard issue pipboy. An arm mounted personal computer, worn by everyone in the Vault. Used to coordinate the relentless pace of expansion, needed to work as an apprentice. To learn the craft that would be his life’s work. A noble calling to ensure a future for all that remained of the human race.

A quirk of fate saw John equipped not with the crude, clunky, pipboy model his father wore. That almost everyone around him wore. His looked smaller, sleeker, finished in a jet black sheen. And capable of doing far more than its drab counterparts.

The world above had been ravaged by atomic flames, yet life clung to its bones. The Red Valley fared better than most in the century since the bombs fell. The clean water and rich soil protected by rolling hills. All spared from direct strikes, for the most part. Life survived here. Trees spawned from charred ground, misshapen, green leaves turned red. Along with simple crops, grown wild at first, then cultivated by the survivors.

The scavengers of the old world were inventive, hardy people. All determined to rebuild in the ruins of a world they never knew. In the decades that passed settlements emerged. They grew, spreading along the valley floor.  Reclaiming the pre-war remnants of the once industrialised heartland. Salvaging the robotic wonders of a bygone age to build their walls and work their fields. To protect them in the dark of the wasteland. But such things are uncommon in this world, and the rarer something is, the greater its value. And the worth of pre-war technology had not gone unnoticed.

The last, real, power in this world rested in the mechanised hands of The Brotherhood of Steel. Forged from the mortally wounded old world military. The Brotherhood used its access to the weapons made for a conflict no one won to strike out into the wastes. Men and women were equipped with advanced armour, aerial transportation, high grade weaponry. Accompanied by the training, strength, and will, to put them to use. They established chapters and set up outputs far and wide. All dedicated to a single purpose. To ensure the technology left abandoned by its long dead creators didn’t fall into the wrong hands. Namely, any hands that were not their own.

This is the world John escaped into. A place of horrors brought forth from atomic fire. A place where survival meant battling against the darkness. Fighting a war each day to get to the next. And war...war never changes

Reviewed at: Chapter 23 Her Father, The Elder

The Fallout setting is vast and provides sufficient worldbuilding for many stories; disappointingly, most I've seen thus far have tended to stick to retelling canon (e.g. 3 or NV). This one is special, one of the few that tries to tell something unique. I'm certainly enjoying it thus far, the protagonist is alright but the excellently written characters he surrounds himself with were what really grabbed me and gave me faith in the story's potential. Looking forward to whatever the author has planned.

The story itself mirrors kind of close to fallout 3 so far in that a vault dweller is leaving their vault to explore the wasteland above. However, the similarities with any game stops there and the rest is an entirely new story that's both nostalgic to those who have played a fallout game and remember the first time seeing the ruined world to explore as well as being good enough at showing the world around and in the vault to make anyone new to the fallout fandom feel like they're not ousted or out of place. I worthy story to follow and rush to whenever it updates

Fall Out mashup with a twist

As one  who is a giant fan of the PC game Fall Out and all it's iterations, I'm finding this story to be great fun and runs pretty close to the game cannon. The characters a well thought out and are devoloped nicely so as one reads the story you can visualize it in your minds eye. The plot is great and leaves the reader wanting MORE! Know that I'm an avid reader of alot of serialized SCI-FI and Fantasy books on line and I'm not and editor or critic in any way. So if I don't like an authors sytle of writing I just will not read it or coment. This I like and am enjoying it. Thanks for your hard work Four Pin.

A must read for any wasteland survivor out here.

Let's be honest , if you haven't played Fallout 3 or 4 , you will be getting only a tenth of the full experience this story provides.

If you have sometimes just forgot about the mainline quests and just let your feet take control and wander the wasteland, this history is for you.

Full of detailed if not always clear pictures of the enviroment, fully fleshed characters, and some digging into the MC, I have great hopes for this novel to get into the hall of the best RR will have to offer to a select audience.

This is not your average reincarnator/xianxia/transmigrator/looper story (as fond as I am of some of them , mind you) , but real meat. Come with some hunger and you will be served.

The author is willing to fix the minor typos and is really catering to the audience , so jump in and let's make this the best shared experience we can.

Great if a little slow at first

So lets get this out of the way early this is a marvelous story that I would recommend for anyone even those that have not played any of the fallout games (particularly 3 and new Vegas). It has  a great cdoi main character and it has a amazing cast of side characters it's story is strong and well balanced between combat and dialogue and it is very discriptive of the environment that our main character finds themselves in. I does a marvelous job of creating a compelling story and drawing you in without you even realizing it. It does suffer a minor pacing issue in the beginning but it fixes it quickly and it is an enthralling read .

too much details, but its not bad.

I didn't read much, but from what I did read, I can say confidently, that the characters and the world do have substance at least a moderate amount of substance that would suffice for me.

There are no major problems with the grammar or with the storyline so far.

But the writing style is... Well not to my taste.

some people liked the many details that were put into the world, however I found them super boring to the point that I often skipped every hughmungus paragraph that started with the details of a house, or actions of a certain characters.

The author truly did put a lot of effort into the details of the world, but it was too much for me, every chapter there would be at least three giant paragraphs with details on the scenery \ character's action.

If you're okay with the author describing almost everything go ahead, even though he wont give you lot of space for imagination, the story will still be pretty nice.

I reccomend for y'all to read a bit to see if its good for you or not.

I love the Fallout Universe and the post apocalyptic time period over all. That could make me biased for this story, but I would like to belive that I would have enjoyed it even with no previous knowledge.

The author uses his story-telling to really bring the characters to life. The story sucks you in, and the chapters length is just right for a quick read every now and then.

The author have to work a bit on the grammar though. He seems to love his commas to death. Even in the last chapter it is as full of them as in the first. When I get in the flow of the story though, my eyes just learns to ignore them. In other words, it's not unimmersive in any way.