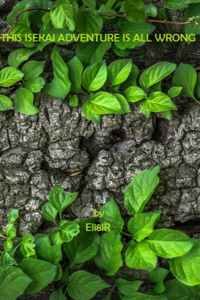 This Isekai Adventure Is All Wrong

In the village of Ibusa (ee. gboo. zor), strange things happen when it rains, it is simply an aspect of life that its denizens have adapted to since long ago. However, finding a gravely wounded boy who seems to have fallen from the sky, after a heavy rain one afternoon, might just be a little too strange.

The main focus of this story is slice of life. And I guess maybe comedy.

Is there an overarching plotline? Yes. Definitely.

Do I, the author, know what it is? Probably.

Will there be action? Eventually.

See, the thing is, if you're the kind of person who only enjoys stories where the MC is the badassest mofo in town, or where he/she always has to beat some progressively stronger bad guy every arc, then this likely isn't for you.

On the other hand, if you're the kind of person who can simply kick back and enjoy a story simply to see where it leads, then please, hop right in, because as the title says, this isekai adventure is all wrong, therefore whatever preconceptions you have about isekai fantasy would be best left at the door as you come in.

Thank you, and I hope those of you who decide to give this a try like it.

Since keeping to a schedule seems next to impossible for me, just know that I do my utmost to post five chapters every week.

Reviewed at: #13: Conversations In A Cozy Parlour

This story is alright. The writing is decent, though there are a few parts where wierd puncuation or wording broke my immersion.

The main character is Kofi, who is being healed after suffering a crippling injury. It may sound silly to say, but Kofi has no agency so far in the story. Being crippled may have something to do with that. Unfortunatly, it makes him uninteresting to me. On top of that he has amnesia, so no backstory. The only thing he has is his personality, which is... ordinary.

The main plot seems to be Kofi overcoming or learning to accept his disability. The story just hasn't gotten me invested enough in the characters to care.

I'm still laughing as I write this

It is frankly amazing that a story about a teenager waking up with crippling injuries (that don't just disappear after a chapter or two) and no memories of his life is this funny, but somehow the author manages to make it work. Between Simi and the now named Kofi, what should by all rights be a melancholy tale of trial and finding oneself is turning out to be a lighthearted, slice of life, isekai type story.

I hope it carries on like this, cause I'm liking what I'm reading.

Reviewed at: #25: The Mayor Comes To Visit

The problem with this story is simple.  25 chapters in, and our character :

a.  Hasn't done anything but exist

b.  doesn't face any real plot or drama

So we have a character who gets dropped into some fantasy world where somehow they have fairly modern conveniecnes, from suburban houses to newspapers, yet face frequent destructive monster attacks.  And our character gets crippled and has no useful memories or skills.  So he has no way to overcome any obstacle, he's just a helpless observer.  Fortunately, there are no obstacles - the people in town heal him, give him blood, carry him around in a chair, let him hang out with a little girl unsupervised, and when monsters attack, they carry him to a bunker to hide in safety.  So to be frank, it just isn't a good story.  The writing style is ok but there is no reason for the words to be written.

First person present tense so not exactly novel, but as I'm starting to expeect from this author, immersive. Sentences flow and the narrative is easy to follow, more importantly, the story does not feel like it is narrated to you by a person, but instead feels like you're sitting in the MCs head and watching the world through his eyes. A deserving five stars.

Different. The author is clearly subverting the isekai genre, though it is unclear if this is deliberate or just a result of his own somewhat quirky style of storytelling. Whatever it is, the story has started off on a really high note that I hope can, at the very least, be maintained till the end. Another five stars.

Neat with few errors. Unfortunately, I'm still pedantic so a four and a half star rating.

This is probably the biggest selling point for me. Within just five short chapters and a prologue, we've been introduced to three different characters besides the MC. First there's Khalil, the burly, gentle healer, then there's Simi, a loveable, exuberant child, and then her so far unnamed father. Each of them leave an effect, making you look forward to their return. It is refreshing, especially in these times when stories tend to begin with an MC going on solo adventures.

All in all, my title sums this up quite well, so far so good. I just hope it continues to be.

It's enjoyable so far even though much hasn't happened yet. I really like Simi, she's funny.

I also really like how the pace is not too fast, letting you appreciate the world and characters, but most of all, I like how the story doesn't go how you would expect.

What really hooked me to the story is the character's interaction between each other paired with the pacing of the story that immersed you in the story.

Don't have a lot to say about the story. It's all excellent writing with minor grammar errors.

It's my first time reviewing a story so sorry if it feels awkward. ☺️☺️

Reviewed at: #24: The Obligatory Info-Dump

This one is definitely one of those stories that has the potential to be excellent! Whilst it's currently in its infancy, the main character still feels a little bit of a blank slate, as his entire personality revolves around his ... current circumstances, but the other characters around him seem fleshed out and feel like genuine, real people.

What I really think gives this potential is the world building. Regardless of the progress of the MC and their situation, the world seems to still be carrying on as normal, and both the current world circumstances and little polished details really make this feel like a world that would be hugely interesting to explore.

My main concern is that this story is specifically listed as Slice-of-Life, and yet I don't think that fits at all with what we can currently see of the overarching plot. I'm not sure how the author plans on balancing this, but I really am looking forward to seeing the results.

This storyi is a great story

The way it's written is enjoying to read

And the humour is superb

Grammar  is good coz my own grrammar is not good

characters are alive and funny    of course