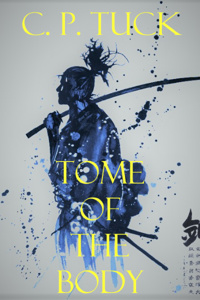 Tome of the Body

Every great story needs an author.

Samuel Bragg, an ordinary human map maker, sets out from his humdrum life in a small village to take over the estate of his late father, and discovers that an ancient, fallen god calls out to him in his sleep. Come find me, it says. Intrigued, Samuel sets out to find the deity, assisted by his two new mysterious and powerful friends.

Read Tome of the Body to discover what happens when a legend is born. In a world teeming with the extraordinary, what can be accomplished by a young man who is quite ordinary himself? Together, we will learn, just as Samuel does, that even amongst the ordinary, the extraordinary can be born.

New chapter every day until completed.

This story is posted both on ScribbleHub and Royal Road

Tome of the Body, a Heroes Journey

Having read all the way through what is essentially the first book, I can definitely recommend Tome of Body.

Now for a bit of a longer Review,

I feel that Tome of Body is simply well written, the author has a style which I particularly like of laying hints about not only the story, but also the world and other things throughout the writting, little bits of foreshadowing that are very well made and elegant.

Internal Logic that holds up and Time passing in a way that works very well for a story, I rarely see authors on Royal road attempt to use chapter ends and beginnings in ways other then simply trying to bait readers into reading the next chapter.  Here you can see that C_P Tuck really did try things out for the chapter breaks, finding places where they would fit into whatever is happening, experimenting with different ways to start chapter to try and control the feeling of pace and it just works wonderfully.
Conversations flow and have descriptions with them, which add to the conversation without interupting it, Magic is described quite nicely at some points there could be improvements but it holds up and you get a good feeling of what magic is like in this world.

The Story is in the form of the heroes journey, and it definitely works very well for what the author is aiming. Although it's not the most original story structure it's like that because it works well, the only reason why I rated it 4/5 is because one segment of it could have been done better. So I'll describe each segment of the Story by the segments of the Heroes Journey, so as to let others read it directly.

The Call of Adventure / Inciting incident

Here the Author Wrote a believable and easily likeable character with understandable motivations, an interest in what is elsewhere but not fully willing to take the step to leave, until He is brought out of his normal life as a Cartogropher into the adventure.

On the beggining of the Journey everything starts without much magic, but everything changed when the bandits attacked. Here we get our first part of supernatural aid in the form of a Mentor Figure in a way, along with the helper figure. And the consequences of ths aid then brings about the second half of the Supernatural aid via the Fallen god mentionned in the summary. This helps defeat that which was preventing him from venturing further, in this case the bandits, and leads us to

Here the temptations are those of not only a life of luxury but also that of learning with the Mages College. And we get challenges such as an Archmage who had a similar goal to Samuel but failed, and some related to the goals of the Helper Figure and the Mentor Figure.
I won't spoil much about this section since a good number of chapters are part of it, but we can essentially break this down into two sections in a way, first the preparation to fill the goal the Fallen God gave Samuel, then the Journey to complete what all 3 characters mentionned have set forth to do.

We even get the second helper in this section, although he doesn't participate directly in the next section he is present both before and after it.

This Section is directly related to the Fallen God, and Samuel comes out changed ready to help acomplish the goals of his Mentor and Helping figures.

I'd say that this section is one of the much faster paced ones, and could likely have been better, but at the same time I understand why the author did write it how it is and it still is good, given that it is a transition into the next segment.

In a way this is part of the last section, since they both are partially intertwinned. I do not know if having them seperate would have been better, but here our 3 characters face their greatest challenge yet, and after facing it emerge victorious.

The aftermath of the fight causes some changes in the characters, after a moment of calm and looking back onto the journey and what just happenned they each set out on their own path. Samuel's recieves the fallen gods blessing and with it does his return. However he and the world is changed from the experience.

Given that the story is made in the form of the Heroes journey, you have some strengths and some weaknesses as to character Developement. On one hand you have a very well developped and explored Main Character Samuel, on the other hand, you have very few characters outside of the main 3 (Samuel, the Mentor and the Helper) that are explored in much depth. What this means is that you have some characters you definitely remember more then others, but in general they are very well written. I feel that with more time, other characters could have been developped more but at the same time that likely would have hurt the Story given how clean the style of it is.

Foreshadowing a legend in the making

Concise prose and exacting grammer. Each chapter will become a journey for the reader.

Everything said and described appears for a reason, and even I had to re-read multiple chapters. Not only to understand, but to enjoy the viseral flow and ebb.

If you want explosions or harems or level grind, look elswhere.

If you want world-level intruge, I see it happening here.

Binged it in a day

It was good, a story that drew me in like a fish on a hook. I think. Not much of a fisherman but regardless, I was lost within the world that has been created. Tome of Body is a great read, and as such I reccomend others read it. Very few, if any grammar issues that I noticed.