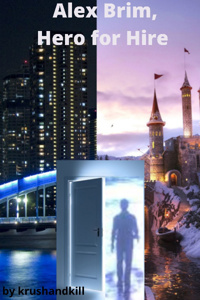 Follow the two lives of Alex Brim on Azurath and Sakamo Ryu on Earth.

On Earth, he is a fifteen-year-old boy with ascendency of English-Japanese. His father was English, and died before he was born. His mother was Japanese and died of tiredness when he was three, trying to keep two jobs to grant him a house and food, after his father’s death.

He is a Part-time worker and has a lot of secrets that grants him an easy going life as a High School student.

On the Magical World Azurath to where he can travel by using a magical pendant, he is Alex Brim, a Hero for hire and a Mage Summoner, a rare evolution of a Mage that enables him to make contracts with different Spirits of the elements and use their powers. His help is needed from time to time, because of the Magical Voids that appear in the sky from where Monsters fall, making the lives of the different species that lives there, a very hard one.

Alex shouted to the Orc, surprising everyone:

- “Eat him already! He is in my way, I want your head and the pretty Magical Orb you have inside you! You are not dead already because that dumbass is still there, but as soon as you kill him, you are all mine!”

The Orc let his hostage go that fell on the ground with a muffled bump. The Orc raised his mace to the sky and screamed, giving the signal for the Goblins to attack. At the same time, Alex whispered:

- “Give me a little of your strength, Shinatobe.”

A small dot of light near his right ear answered in a low voice:

Reviewed at: Chapter 24 – The Security Force

It's a story about an OP harem.

Its a story about an MC who is OP becuase his harem is OP.

It's a story about an MC who grows his harem because he is OP.. which is because his harem is OP.

We are promised some fun other world sehenanigans.. and we get some, but the first few chapters skew heavily towards the MC-life-on-earth where he (allegedly with no prior experience with girls?) basically gets swarmed by a girls for... I have no idea why really. He stands up to a bully.. which is nice, but he also acts like a pompous ass half the time threatening teachers and promising to put people in the hospital.

The Mc is, we are to believe, all of the following:

* A martial arts expert who can ingrane any techniques perfectly by simply seeing it once and giving it 2-3 tries. (military OP get!)
* Some super genious that is a national asset (smarts OP get!)
* Personal friend of the royal family (political OP get!)
* A high ranking noble in the other world, 3 times over (Political OP get! Get! GET!)
* A personal friend of the king in another world. (Political OP GEEET!)
* OP magic expert in.. basically all aspects, mostly because of the spirit harem. (Magic OP get, get, get, GET!)
* Will live for 300+ years unless killed (route to immortality OP get!)

Isn't that a bit much?! He's a bloody self-incert mary sue, but with 10 heaps of OP on top!

The Mc is supposed to be smart and humble (hiding his rank and connections to avoid dectection etc) but then, for some unexplicable reason, he flips goes around like a pompous ass showing off his OP ness... i guess so that the reader  or author or who ever engages the self-incert fantasy can feel good..? But this is in tension with the many virtues that are being attributed to the MC. He acts as bad as a cartoon villain sometimes, but everybody applauds him because he is {"alignment": "good", "intended reader disposition": "super positive"}.

The Mc makes really shitty tactical decisions for selfish reasons. Why not just have *spoiler* wiped out? because then he can't show off OP magic! need to put the party in danger so they can see how very awesome you are... but weren't you hiding that??

Ludonarrative dissonance is the bread and butter of this fiction.. it sticks out constantly.

..are the good parts of this fiction (in my opinion). It is here where there is some actual plot starting to develop. The plot has some promise as well and I'm looking forward to some more.

The fantasy world is also where much of the power fantasy plays out. (somewhat hard to go heavy on that in modern japan, though there is some)

The fantasy world also plays of the #1 excuse for the MC having and continuing to accrue a harem in the first place.

I distinctly remember seeing some real bad sentence structures and the like on first reading, it was pretty bad for even me to be annoyed, but upon going back not much sticks out anymore. I guess the author takes improving grammar seriously and has really improved the situation. (That or i've finally become truly grammar blind, who knows :P)

What ever is going on between the MC and every single female he meets .. is just really awkward and strange. Being a person comes second and being a wannabe f***-toy comes first. This is very disappointing.

There are some decent distinct characters though and they do seem to behave consistenly. They also have set motives and traits to which they stick to faithfully.

This is really strange, where part of the character development seems forced and arbitrary and just plain bad.. and then half of it is really well done, like I'd like to give it 2 star and 4 star at the same time. So the Schrödinger's character review score comes out to... 3 for now.

about 50% of the chapters have titles. Where are the rest?

MC starts off way overpower. Not a story I have any interest in reading. The story seems to have a good idea as far as world building. This is the only reason I read as far as I did. I was hoping it would get better at some point, but it does not look like it will change any time soon.