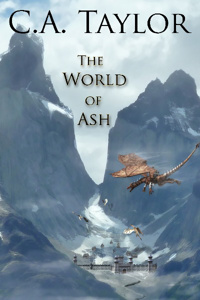 One year later Ash stood glumly and watched the rest of his squadron soar off for their morning practice, while he and Rasp stayed stuck on the ground.

Shadowed closely by Rasp, the dragon-boy plodded off the hard-packed dirt. He was the only boy out of his group who had yet to fly. Rasp simply hadn't grown big enough. Which meant no dragon riding. He was the last dragon-boy in his group going on two months now. His scaly partner simply wasn’t growing as fast as the other dragons. Or rather, Rasp wasn’t growing in the same way as the rest of his siblings.

Dragons grow rapidly. Their wings stretch wider day by day with bodies burgeoning larger and increasing in both strength and endurance. However, while Rasp’s wingspan was normal, the rest of the small dragon’s sinuous body seemingly only increased in length. Rasp was increasing in height, but not at a rate comparable to its elongated body. Unfortunately, length wasn’t a factor in a dragon’s ability to carry a rider.

The rule of thumb for determining a dragon’s being ready to bear its future rider was if dragon could stand eye to eye with its human with all four feet on the ground. It signified that the dragon’s body was large enough to comfortably saddle, and that its legs were strong enough to support their rider’s weight. A standard upheld for over a thousand years. Yet Ash despaired as Rasp’s head barely sat level with Ash’s thighs, not even half the required height. A year ago the little guy’s eyes had been level with his shins, so the boy figured he might have to wait at least another year at this pace. Maybe even longer.

Ash had been the last one ground bound for so long that the soldiers stationed at the fort had begun to refer to him as Fat-Ash, on account of Rasp being unable to carry the hapless boy. He had also acquired the unenviable title of ‘Fatty’. It was all in good fun since he had a slim build, but that didn’t stop the playful ribbing from stinging a bit more each day. Especially now the nickname was slowly turning into Fat-Ass.

Having returned to the dragon-house Ash and Rasp headed to their stall. Where the black dragon then proceeded to coil up on his pile of hay to promptly start gnawing on its quartz chew-toy. So to the sound of teeth grinding rock, Ash sat on his bench to idly flip through a manual on dragon squad formations.

All dragon-boys were taught to read, write, and cartography, as they were essential tools for scouting missions and reports. They were also required to study aerial tactics for the battlefield. Required reading material that Ash had entirely memorized months ago. Unfortunately, rules were rules and he would be studying flight maneuvers and hand signals for the foreseeable future. Groaning, the young boy sprawled out on his bench and got an answering hiss from the middle of the room.

Turning his head, Ash stared as his partner persisted at its favorite activity. Which was chewing unceasingly on the quartz. The originally rough, bumpy crystal had gradually been nibbled into a smaller, rounder item of which Rasp was incredibly possessive. For the dragon-boy to get Rasp to follow him anywhere without crying required Ash to bring along the pet rock.

Weirdly enough however, his dragon hadn't expanded on his ‘hoard’ since the ritual. It was another oddity particular to Rasp, since the other dragons had never quit gathering new shiny knick-knacks. It was a problem the other boys complained about often since their stalls were minefields and it was common to hear curses of pain whenever random objects encountered unsuspecting toes.

It was hours later when the midday bells tolled, causing the boy to jump up in relief. Speeding out of the stall and leaving Rasp behind, Ash continued on out of the dragon-house. His efforts were rewarded as he was the first to grab a wide shallow wheelbarrow outside the Oven.

The Oven was a long open-ended brick building full of fiery ever-burning coal that emitted scorching heat at all times. A winched chain ran through the building, strung with giant hooks. Whole sides of freshly butchered beef were hung on one side of the brick building and seared-meat would be winched out from the other end. The perfect meal for hungry dragons.

As Ash trundled up, two men with long hooked poles stationed at the Oven’s exit stabbed into a thick slab of beef. With practiced movements the sweaty pair flipped the meat into the dragon-boy’s wheelbarrow.

Thanking them, Ash quickly spun back towards the dragon-house. Unfortunately he wasn't fast enough as loud teasing followed.
“Slow down Fatty, there’s always more”!
“Leave some for Rasp, you hear”.

Back at the stall, Ash managed to safely unload the meat into the dragon’s trough despite his shins suffering repeated famished head-butts. Ash then left behind a cacophony of happy growls and crunching bones to return the wheelbarrow.

Done feeding his dragon, Ash headed straight for the mess hall. He was hungry too.

Grabbing a tray, Ash loaded up before sitting at an empty table. Methodically working through his meal, he had just about finished before other members of his squadron finally started trickling in.

Ash kept gnawing on a tough biscuit while the rookie riders filled up his table. A few of them looked over at Ash in sympathy as their chatter shifted towards the morning flight, but he chose to ignore it. Polishing off the last bit of stew on his plate, Ash nodded a farewell before heading back to his stall.

Rasp was impatiently waiting for Ash the moment he slid open the door to peer over at the trough. “Hey buddy, did you make sure to eat everything”? Like always, everything was polished off. Even the bones. The boy looked down to question the twitchy dragon, “You still hungry”?

It was something Ash asked the black dragonling after every meal. Most days the smart dragon shook its head side to side in denial. Just like today.

Sighing in disappointment, the boy entered the stall and before turning to the wall by the door. Loosely hanging there was all of Ash’s equipment.

The small dragon paced back and forth while Ash geared up. He strapped a short dagger to his belt alongside a few pouches filled with small river stones and a sling. Lastly, the youth picked up Rasp’s singular chew toy and secured it in a empty pouch by itself.

Fully prepared, Ash suddenly froze in place while staring behind the antsy dragon’s head. Rasp quickly twisted to peer back before peering up suspiciously at the immobile human. Ash struggled to hold a stiff face.

The moment he lifted a leg Rasp charged off with an excited, sustained hiss. Other dragon-boys and riders bemusedly stepped to the side as Ash chased the black blur already halfway out of the dragon-house. “You silly lizard, wait for me”!

Once free of the building, he called Rasp to his side before hurrying over to the fortress gate.