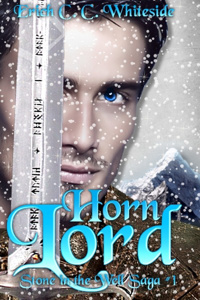 The weighted ball troubled the head of my father, so we made a stop at the bowyer's hut before heading home.

I pushed aside the deer hide curtain that kept the flies and mosquitos from finding their way inside. I first felt the heat, then caught the smell of burnt stone and wood chippings that made my nostrils itch. I rubbed until it reseeded, then looked around the hut at the many bows and arrows that hung on the wall. Two large, sweaty bodies, built of muscle, fat, and black hair, shaped wood and chipped stone at two workstations. They wore exhausted expressions and leathered skirts. Both men looked up from their duties, eyeing her father as he stepped inside.

"Reigrum, what do we owe the pleasure?" Burnn asked in his dreary tone. "What you've got there?"

Father stepped around me and tossed the weighted ball to the man. Burnn was slower than he looked and more clumsy, bobbing the iron from one hand to the other until it took flight out of reach, being snatched by the second man ... or boy ... who was as large and stout as Burnn was.

"What is that?" Father asked, finding a spot in their circle. I snuck in beside him.

Burnn brushed a finger down his broad chin, rolling the stone between two fingers. "Eastern sorcery."

I felt a chill slip down my back, and I hoped they hadn't seen me shiver. They stayed fixated on the circular silverish-gray stone.

"Where'd you find this?"

"Alongside the River. It killed a Centaur."

Both Burnn and Warii gave her father a long, disturbed glance. "We've seen these before. Iron." He turned towards his son and nodded.

Warii disappeared behind another hide curtain that concealed the rear end of the hut. He reappeared carrying a rattling clay pot. He handed it to my father. He glared between both men, gave a cruel shake of the pot, then brought his eyes down. I didn't have to see what was inside; my father's twisted face told me it was not good.

"How long have they been here?"

Warri admitted, "A season," Warii admitted, lowering his head to keep from father's glare. "That's not all. These invaders have built a strange camp."

Father used his Lords' tone. "What kind of camp?"

"We're uncertain. They're hunting in mass and driving away the herds." Brunn caught his breath. "But that's not the worst of it. They're expanding north up the canary fields."

Burnn shook his head. "No ... I believe Tardakk's victory over the wings has kept them slothing away in the south."

Father looked around the room, while a sliver of light brightened his eyes, and they brightened.. "You said this was eastern sorcery?"

"Yornmen. They seek vengeance and to spoil our lands ..."

Father found a seat, bringing his hands to his forehead, trying to work the worry from his head with his fingers.

I felt the courage to speak in his stead. "There are mountains and crowls in the east. And an ocean that separates ArkiLa from Everyorn. Are you telling us they've crossed?"

Warii replied, "we're telling you they've not only crossed, but have uprooted the crowls, cleared the mountains, and settled in the prairie lands. And by the looks of it they mean to move North towards Bronzebuck."

Silence crept through the hut until it died by my father's lordly holler. "And why wasn't I made aware of this until now? Why keep this ... secret?"

"We brought this to the attention of the Hyquin Elders, my Lord." Burnn replied, scratching the back of his head. "They said it was nothing to concern you about."

Father looked between them through furrowed eyebrows. Chin pressed on his fist. "And what cause would be greater of my attention?"

"They believed your interests were on your legacy." He saw father's displeasure. Warii shifted uncomfortably. "What I mean, my Lord, is that the matters of giving your daughters away and strengthening your tribe were of greater importance."

"I see." Reigrum's lips sunk. "If I'm understanding you correctly, I had no time to think about eastern invaders and our food growing scarce, because my daughters are my true focus?" He turned to me. "As they should be." His eyes were light and warm until they turned to stones upon the men. "I'll speak to the elders later. For now, you two will show me this camp."

"No." Father brought a hand down on my shoulder. "You must tell your mother of my whereabouts ... Besides, you're in no condition to ride."

I swallowed, uncertain by what he meant. Had he learned about my first blood? Impossible. If he had, he'd let it known.

"As you say, Father," I replied, rubbing his hand, hoping my touch would ease him some.

We said our goodbyes, then I walked Mayhee through our village. Several evenly spaced homes; standing tall and wide, with wattle walls and golden thatched rooftops; riddled the golden fields. Foxes and coyotes feasted on rabbit, moles, and mice; birds nested and sang; and creepy crawlies walked and burrowed in the earth.

I waved to the herders and the farmers, then breathed in the warmth while the wind yanked my hair in every direction.

I didn't have the heart to tell the truth. "It felt great."

He chuckled, "it'll be a few rides before you break it in." He waved, then returned to working saddles until daylight turned to dusk.

Thousands of hoofs hardened the path leading to her home. I followed it to the center of the village where my cottage stood like a stack of wood in the sea of gold. It was the cottage of my childhood. One I'd soon be leaving once my father learned of my first blood and wed to a match of his liking.

I brought Mayhee to the fence behind our cottage, giving him pats as I led him inside. He whipped his head then took off into the fields, sending the other stallions into a gallop. They circled the fence line until Mayhee overtook led the herd to my delight.

I must've watched them for an hour before retreating to the cottage, walking inside to the song bug's favorite tune. I pushed aside the deer hide that hung over the doorway, stepping through the threshold between sky and roof. There dim candlelight greeted me with a peaceful glow. My eyes adjusted quickly to the shadows lingering in every corner.

From the table, mother looked up from the hide she cleaned. The shadows unable to conceal her young, motherly beauty; a beauty that hadn't faded even after birthing six daughters. She raised a hand, and I came and sat across from her.

"Where's your father?" Her voice rang notes that complimented the song bug's tune.

I met her hazel eyes that'd darken with worry. "We found something," I replied.

I spent the next thirty minutes explaining about the centaur, the iron ball, and the camp father went to investigate. Mother listened with intrigue, feeling our bowls and bellies with soup, while I filled her heart with worry. Once I felt nothing else could surprise her, I sprung my secret upon her.

The brightness on her face, that welcomed the news, darkened. I suddenly lost my appetite.

"You should've told him. You know how you father is. Remember when your sister kept it secret for six months? How hard he came down upon her?"

"I remember, mother." I shook the thought away. "I intended to tell him when he was less ... distraught."

I obeyed her words, and grabbed an old, half beaten centaur robe I kept for just the occasion. I headed towards the river. The moon sat high and round, lighting my way After a quick trip, and a long dip, I wrapped myself up, feeling mostly clean, then hurried back to the cottage. By the time I arrived home, the fresh rag between my legs was already sticky, red, and rank. And for a moment, I feared there was no hiding it from father. I'd have to tell him soon as he got home. I didn't realize it'd be quite so soon ...

At the door, I beat the dirt from my riding boots. That's when I noticed it ... silence ... the song bugs had gone quiet.

"It's nothing like I've ever seen, Nalisai ..." I raised my ear, to my father's dreadful tone. "Herds are being gathered for ..."

"Butchery." He whispered. "It is the only way to describe it."

"The only thing I can do ... Eroh is to be made a man come on the morrow. We are to be there for his ceremony. I'll speak to the Chief Horn and tell him we must assemble the hoofs."

"Assemble the hoofs for what?"

I gasped. My legs shook, feeling too weak to carry my weight. I collapsed against the cottage, breathing heavy. After filling my lungs with enough air to clear my head, I decided what was best for my father. And that was to not burden him with my first blood.