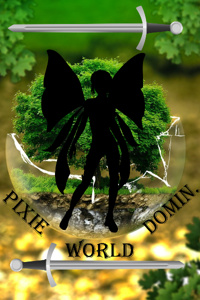 by Cedric The Rabbit Slayer

When people reincarnate with their memories intact, some of them try to start a new life. Some try to get revenge while others try to fix their mistake.

But, Seth couldn’t care less about any of this stuff. He just likes to fight. After reincarnating countless times and kicking alien ass, his latest adventure is on a fantasy planet. He is now a tiny pixie inside an unknown forest.

Will this deter him? Hell no.

“First, I'll conquer the forest and then the world!”

Join Seth on his epic adventure to fight anything and everything that crosses his path, to become the strongest pixie of all times, and of course, to conquer the world!

the mc is an idiot

and this is known right out of the gate

this is a comedy about how the mc is just an endless warring beast that refuse to do something else again and again.

the world is interesting but the mc does not care

See all these high reviews.. read it.

Reviewed at: Ch. 40 Monsters on the Battlefield

It's awesome. I don't know how but it is.

Somewhere between the 'doom squirrel' and battle of 'red slongs' I became hooked.

And now for words to fill the 50 word limit that is required because you need more information to know it's a good read.

Reviewed at: Ch. 40 Monsters on the Battlefield

In short, the story is one big hilarious mess of the MC going on a monster massacare. It is genuinely funny and enjoyable.

Plot? There really isn't one. I mean technically there is one, but it exists to gently nudge the MC (and his victims) from one scene to the next, does that and exactly that fabulously and makes no sense whatsoever.

The mc is lacking in.. common sense.. and direction sense.. a holding back from slaughtering non-hostiles sense. All of that .. sense .. has been funneled into murder-sense. Lacking in sane reasons to treck across the country the MC just strongarms his companions along to arbitrarily satisfy his whims.

For the combat scenes there is a lot of very aritrary power scaling and "ha! that wasn't even my full power, no that wasnt it either..". Basically there is no logic to the combat or power levels except whatever would be the funnyiest to read

This story is hilarious. The mc is an absolute idiot but not in an annoying way and all the side characters are funny too. The fact that the mc gets tricked by everyone might turn off and annoy people. But I don't think many people will hate it he's not a naive mc who gets used he's just dumb as a rock. I hope he achieves his dream of world domination.

Reviewed at: Ch. 5 From Rags to Stupidly Rich