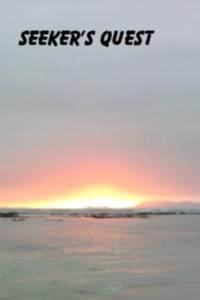 What would you do if you woke up on a riverbank with more than just memories of the last twenty years missing? The whole world has changed and you suddenly have a status page like in the RPG games.
Magic is real, Gaea woke up and a system Apocalypse happened. The worlds have changed and you don't remember anything about it, but now you have stats that say you are a Seeker and there is also a warning. Beware obstructing the path of a Seeker, except you don't know what you are seeking.

Please be patient with me. I'm doing everything on an old  7'samsung tablet and haven't got much space to work with, but here goes.

This is a story of an ordinary man. He isn't a maths genius that can solve Dimensional equations, solve intricate puzzles, communicate well with people, or a very deep thinker. He is just an ordinary South African guy that finds himself suddenly living in some extraordinary times, and decides to do the best he can.

I enjoy this author's style. It reminded me a little of Russian LitRPG authors. Some of the idioms are similar and there's a gritty style to the writing. The mechanics aren't spoon-fed, and the author does a good job of revealing world-building through dialogue and actions instead of through internal monologue.

Overall, the grammar is bad but that's because the author doesn't speak English as a first or second language. With an English-speaking proofer, I think that wouldn't be a problem. Even with the typos, it was an easy and interesting read.

I think the best part of this story is the characterization. Some of the supporting cast feel flat, but they'll probably be fleshed out in other chapters. As far as the main character, we have an older protagonist who is also a veteran. There's a jaded outlook on life that I enjoy reading about. The main character has a murky past that I think will be interesting when it's finally revealed.

Overall, the author has written anything for a long time. I can speak from experience when I say that it takes time to get back into the groove of writing. I think with just these couple of chapters, the author shows promise. I expect that later chapters will be even better. If you're familiar with reading translated LitRPG, then I wouldn't be too worried about the grammar. Nothing is really story-breaking.

I can't wait to read more!

This is a "The System arrives on Earth" story.
First a caution: the author is not a native English speaker and is struggling with grammar and other mechanics. The positive side of this is that he is working constantly to improve and this is clearly evident as the story progresses.

The story itself is of the MC stumbling at first with the discovery of the fact that the world has changed. He is confused and unsure and, as you discover a few chapters in, undergoes severe memory loss. While this makes for confusing reading the first few chapters, it's worthwhile as it contributes significantly to the character building of the MC.

Once over this hurdle, the MC starts feeling a little OP, but not enough to detract from the enjoyment of the story as he starts to find his feet and figure out how he can use the System to his advantage, especially when he starts to "think outside the box".

The author has fully grasped the concept of "show don't tell" and we get to discover the mechanics of the changed world along with the MC, learning bit by bit what has changed and why things are the way they are.

There is quite a lot of base building and some crafting as the story progresses, but it's interwoven with the plot so each aspect of this is fully justified by the needs of the MC and his growing understanding of how he can begin to fulfill his destiny (the requirements of the "Seeker Class" mentioned in the title). He builds a base and support from which it is clear he will eventually strike out into the wider world, although this is just hinted at at this point of the story and is yet to be realized.

Supporting characters are fleshed out sufficiently to stand on their own in most cases where they are close to the MC, and thus more important to the plot, although some of the characters are cardboard flimsy and clearly there as a foil for the MC.

The author is South African and that is important because he has set this story in an area and culture which is clearly his own, so the idiosyncratic language and culture bleed through. Rather than this being detrimental to the story, it rather adds heft and substance  in direct contrast to the stories written about, for example, the US by someone who is clearly not a native.

The back story of the MC, and one of the cast of supporting characters, is slightly painstaking and obvious, but that is clearly a consequence of an inexperienced author. Seeing as this is RR, it should be easy for most readers to simply suspend their disbelief and read for enjoyment.

I highly recommend this story for it's fresh take on the genre and the author's obvious passion for his craft as he works to better it and provide a richly entertaining story!

Lewis here gives us something that few others have managed on this site. A character, and an environment, that is utterly believable. The main character, Louie, isn't some flat, poorly written flop of a person. He isn't some overpowered God descended from the heavens and destined for greatness. Rather, he is but a man. He has his foibles, and he has his great moments. Lewis has written a character that is truly struggling I'm a harsh new world. Be it struggling with decisions, struggling with events that occurred outside of his control, or struggling to survive. Throughout it all, he remains a truly believable person. Not a bad person, certainly not a good person, but a person who believes that what he does is truly for the betterment of the world. For that, Lewis deserves 5 stars.

I'm a huge fan of the post-apocalyptic genre. Having said that the genre is littered with literary trauma.  Poor English skills compounded by poor technical skills and glaringly obvious lack of understanding their own progression system. These stories also tend to be littered with ridiculously OP MC that degrade the story to little more than juvenile fantasy of comic books and harems. This author has managed to bypass most of these mistakes and put out a fascinating variant of a system. Yes the OP is overpowered and I forsee problems in the story line because of it, but I love the characters. I'm flat out sucker for pets or familiars and love the ones introduced so far. Grammar is slightly above average for a typical English speaker. The biggest selling point is the brutal truth of human nature being magnified in tragedy. Saints and sinners are made by the tragedies and the survivors responses. This novel IS full of triggers, but so is everyday life. We have a real MC who is practical but compassionate to those willing to help themselves. I do get the sense that the author is less than friendly to those who have mental health issues that make them less than "productive citizens" as defined by the "pull yourself up by your bootstraps" mentality.