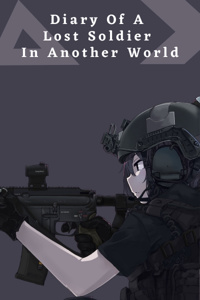 Diary Of A Lost Soldier In Another World

Onaga Katsuro, a seventeen-year-old soldier in the JSDF finds himself fighting in the second Russo-Japanese war in the year 2045. Due to manpower shortages, the Japanese government starts using child soldiers, even using girls as young as fourteen. Onaga Katsuro and his platoon of child soldiers are taken by surprise and he thinks he dies from a grenade but he finds himself in a dark world with one of the eight gods of creation. The god of Darkness, Sin, Madness, and War has need of a champion.

Katsuro shall be his champion in the new world.

This a story of the greatest triumphs and deepest despairs, of gentle love and corrosive cruelty. Katsuro knows not what the god wants or what he is meant to do in the new world.

But he knows this, the prize offered by that god is impossible to resist. He will obtain that prize no matter how many bodies he needs to put into the ground.

He has nothing left to lose.

Reviewed at: Chapter 26: Adrift In The River Of Life

This is a very good story, for a first or one of the first written works here. Very good start, interesting premise and plot that will grow only more complicated with time. I also like world building here: it's obvious that author is not holding out in terms of his imagination, many ideas introduced by author were new to me. Now, the only real downsides to a great world building and plot, is main character of this series. Author certainly knew how to make him interesting, but it showed only in later chapters... But not in first. Like, if I wasn't patient, I'd skip this novel right away. If you have MC that is literally acting as if he's a walking cliche, first few chapters, it's very apparent that probability of increase in quality with time is very low.

To be fair, MC isn't that bad. He has a little twisted mentality, but it's something that is natural in environment where he grew up. The problem is, "dramatic past", "loneliness" and "edgyness" doesn't make him any better. At first , he looks like a waking cliche from those stupid revenge stories. Then, after few chapters into the plot, is when he becomes really a dimensional character. Suddenly, his dramatic past not only exists just for character to be edgy and cool, it's now influences his current actions and choices. The only thing I regret, is that there was so little of characters development before he died and was transported into another world. I think if author wants his work to be popular, I advice him to do rewrite of at least all first few chapters of this story. Amounts of edgyness sometimes is unbearable to the point of cringed, which in combination with unstable flow of the story is resulting into ultra cringe. Not always though. The overall potential of this work outshines all problems by a very large margin.

Reviewed at: Chapter 22: The Tear Between Worlds

Good read, worth binging. An interesting enough take on the summoned heroes trope with lots of room to grow into its own. Maybe a bit edgy for some but I'm a sucker for grimdark antiheroes. Deserves a patreon.

Feedback for the author: at this point in the story it feels like the basics of the primary MCs background is established. Too much more of the same will start to be stale, but you've left a lot of room for character development and growth. Be interested to see if we get more depth with the other heroes, though with the current pace it seems like there's a lot of time yet to start with that. Power progression makes the heroes feel underpowered relative to the demons, though maybe that is intentional, due to their lack of experience, or because we don't have much detail on the system, which may also be intentional. Nice work, looking forward to more.

Reviewed at: Chapter 26: Adrift In The River Of Life

I'll admit that I'm weak to stories like this. Isekai is one of my guilty pleasures and gritty stories, I suppose grimdark fits the term, always catch my attention. The Gilded Hero is one of my favorite stories on this site and Rising of the Shield Hero... you get the point. of course when I saw this I was hooked so I may be biased.

To start off, the style. It's good, nothing too fantastic, but you have a great pacing, not too fast but hardly boring. I'd say that it's just right. Outside of that things can be a little bland. typical fantasy with some odd choices. it's kinda, well, horny, with the 'arcane heat' meaning that mages wear skimpy clothes and almost every mage is a woman. Hey, I'm not judging, though I don't see the point in the choice if there's no sexual content. But yes, nice style, I like it, but it's not too special. By the way, I like the sort of poetic segments. It puts you at 4.5 stars in stead of 4.

Grammar! I suck at grading this because I just skip over flaws in prose after reading huge drawls of bad fanfiction. I usually give five stars but you have a lot of conversations in italics that aren't put into quotation marks and it kind of confused me at first. Now it just annoys me. You can do better.

The story is the best part. There's a few different things going on at once, a few overarching plotlines and a blitz of shorter story arcs. As I mentioned, great pacing with it all and I really like how you can build drama through deception. I'm particularly interested in the princess and how she'll work out, though our MC's somewhat unique class is a close second. It's not exactly powerful, more like an excess of potential, but we're seeing things pick up in later chapters so I'm curious.

Characters! This part is hard. See, I really like them all, each and every one of them, but you haven't been focusing on them enough. You've done a great job of 'show, don't tell' but you need to do a little more showing, some group bonding you could call it. I'm hoping that this will come in time but it seems slow coming. The real problem with the characters lies in the first few chapters. It's really, really edgy, to the point where it's a bit dull. I like it but I know that's not the majority opinion. I also think you need to show the MCs thoughts a bit more. The battle planning scenes with the first rift do a great job of this, though they're a bit lengthy. I like the concept, though, and a few sentences here or there showing his thoughts would do a lot to help us understand him more.

Overall I think you have a great story and if you touch up the first chapters a little and keep at it I'm certain that you'll make it to the top 5 of trending. I'm rooting for you. Keep at it, and I'll be sure to keep an eye out for updates!

A story with much potential

Reviewed at: Chapter 21: The Few for the Many

This is without a doubt a excellent story, the characters are believable, the action is satisfying, the character interactions are smooth and the writing style is flowing. The MC is dark, but not overbearingly so as to make it edgy, the interaction between the heroes,but especially the not quite relationship between MC and life hero, brings enough levity  so as to lighten up the mood. The only bad thing to write about would be, in my opinion, is whole isekai standard formula, the writing is good enough to let it stand alone without all the isekai tropes, because being objective the story is in some parts just a better shield hero, this doesn't make the story bad mind you but a more unique world building might be advised. The writer is good enough to not need a crutch.

TLDR: Read it its good. But be advised, it is a bit dark at times but not overbearingly so.

In For A Surprise

I came in with ZERO expectations, after all the name of the novel itself sounded corny. That's exactly what I was expecting, either a corny harem isekai or a corny attempt at the grim dark genre. This is not either of those things. This author has talent, real talent. The story has a great plot, buildup, and flair. The creative style of dialogue, descriptions, character relationships makes this leagues above the next novel on RRL. Dialogue flows realistically and makes the characters alive. The actions of the characters seem to drive the plot rather than the other way around.(If you've read enough stories on this site you'll know how rare and good this is) Speeches from the mc is organic and great, there are real nuanced backgrounds and a great attention being given to minute interactions. This deserves to be on Trending and top 50 on this site. I love everything about this, everybody should give it a try and upvote it to the moon.

For the most part the story is pretty streight forward in a lot of ways, his interactions with women always make me cringe because of how blatent the wishfullfillment can get. If youre able to get past that or are able to enjoy it youre going to have a good time. The protagonist is a bit of an edgelord because of his past but his interactions with women are pretty cliche and are comparable to your average japanese highschool romcom interactions. The main female lead is a very sterotypical blond blue eyed angel that can nearly always sympathize with the mc regardless of how much he flies of the handle at times.

Nothing else really needs to be said as far as i can tell. The grammar and writing are pretty decent so it isnt a pain to read, its just a little to on the nose for me to be able to personally enjoy.