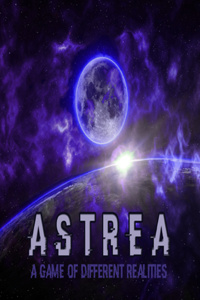 ASTREA - A Game of Different Realities

New World, a game and technology created by the ETHER, boasted to be the second life of humanity. Supposedly they have amazing AI system that is on par with the human mind.

Let me try it with my friends while we aim to be the best in this game and maybe, we will discover things we should never have discovered.

Is this really a game?

First of all, the premise is set up in an interesting manner for the story to unfold. The launch of a VR game that everyone and their mother is excited about. I have not read far enough to tell you if the hype is deserved or not but I can tell you something else. The execution falls flat.

The most glaring of problems lies with the characters, or more specifically, the dialogue. For the most part, it adds little to the story. In the prologue, for example, it serves mostly to put it out there just how special the character we get the POV of is (he isn't the MC, by the way) and how ignorant (simple-minded?) the rest of the children are. It gets better in the rest of what I have read, but characters are quite longwinded. The problem with longwinded speech it does not convey the emotions of the characters through how they say things, but rather what they say. Also, less relevant but quite perplexing, who the hell buys 4 boxes of pastries, eats 2 and then dinner. The MC is not described as obese.

For how many little things annoy me about the grammar, it is amasing how smoothly it flows. It is honestly perplexing. The writing itself suffers surprisingly little considering just how many small grammar mistakes are consistently made. It just feels slightly off, but definitely noticable.

Decent can't wait to see what happens next

Decent story so far, there is some typos but nothing major. I like the fact that the author didn't do the usual of being locked into the game through some heinous bad villein story arc, wonder why she hasn't asked her parents for thier game ID'S wonder when she is going to meet the noble and see what happens