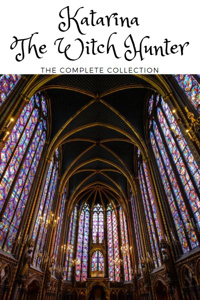 Katarina is a Witch Hunter, a free-ranging bounty hunter seeking out Witches, unsanctioned mages for the theocratic Anglish Empire; the empire of the Golden Lady, Goddess of the Dawn. Allies and enemies alike lurk in the towns, cities, and very forests of the continent where Katarina plies her trade.

Judge Katarina to the Rescue!

What can I say about Katarina Witch Hunter?  It's a very gritty fantasy with Judge Dredd atmosphere. It's non-stop mage chasing action, with a nearly fanatically dedicated MC who flaunts lesser (and the occasional higher) authorities, all in the name of her Calling from Goddess and Church: the hunt of rogue mages and magic welding beastmen. Katarina knows what she is here for, knows she is good at it, and just wants to please her Goddess and make the world safe for the greater glory of the Anglish Empire. There just may be more to serving Goddess and Church than she anticipated.

This is my second time reading Katarina. The first time was reading Books 1-4 as individual fictions. This time i am reading. Aside what I might consider questionable morality as defined by the Goddess, I have few issues with the story.  The characters are well written and consistent. The story and worldbuilding are intense, consistent, and very detailed. I'd love to see the story bible for it.

Style. There are a few issues with POV transition within chapters, but hey this is RR, not a traditionallypublished book yet. There is a bit of profanity,  and an openness about sex that might offend or worry some readers, but, this is a mostly frontier setting (for now), so neither is entirely out of place

Grammar. There are a few issues here and there, but overall less than one person chapter. Given the circumstances and setting of the, actual grammar issues versus intentional grammar faux paus necessary for the story is non-existent.

My final word: More people need to read this. You won't hate me for recommending it.

Starts off well, has a very interesting world & interesting characters. The biggest detriment to this story though is the jarring pacing and changes in POV.

It's somewhat fine for the first 40 chapters or so, but around chapter 50 it just starts going all over the place.

I'm not sure whether there was an issue with the formating on RR, but there's no transition or indication that a new paragraph is from another character's perspective. This leads to wtf moments where you kinda think "wait, whats happening?". May be due to reading from my phone, but I've seen other stories do it just fine so idk.

The pacing also goes off the rails. At the beginning(first 40-50 chapters) it was fine, the reader was able to track what's going on and understand how the story progressed to any given point. At some point (I'm assuming at the start of a new volume that wasn't well edited), small timeskips happen frequently, where no explanation is given to how the MC got there. She'll jump from a castle, to a cave rescuing someone, to being a captive, to a burning village, etc... with no proper transition. Events won't properly be explained, things like a useful item just appearing in her possession, people recovering fully from a near death experience seemingly overnight, etc. It's only until a little while later where they'll be briefly mentioned in passing that the reader can somewhat piece together what happened. It goes completely against the "show, don't tell" rule.

It might also help readers follow the plot by separating the individual volumes in the collection. That way they'll know what book they're on and when it will transition to the next book.