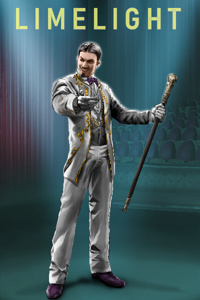 Puck Mallory has devoted his life to the thrill of gambling.  When a round of poker with members of a planet-dominating crime syndicate goes wrong, he finds himself forced into a new kind of game - LimeLight.

Puck thought he was going to be forced to fight to the death for the viewers' sick amusement. He was wrong. Something far more sinister was lurking beneath the competition's surface.

Genetic alterations and cybernetic augmentations are commonplace in the galaxy, but rumor has it LimeLight takes them to a whole new level - using failed competitors as their test subjects.  Will Puck bite the dust on live broadcast for the entertainment of millions and end up a lab experiment, or score the jackpot of his life?

I highly recommend it

Reviewed at: Chapter 5: The Hub

Loving the book, keep up the good work.

Can't wait for the cybernetic parts too.

Reviewed at: Chapter 7: Showdown in the Metro (Part 2)

Very in the moment, as one might expect from first-person. Only thing that annoys me is the spacing between the paragraphs, but that's an easy fix.

It's in the title of the review.

No, really, that's pretty much it.

The chapters that are out right now detail Mallory's entry into the LimeLight system, all that I can really say is that it's nice to see a battle royale style game that doesn't actually go for the stupid battle royale scheme with its inevitable twists.

Y'know. "Oh no, we teamed up but it's a battle royale so one has to die" type of thing. Yeah, LimeLight doesn't do that, you just gotta off 1-3 other players and/or find an escape point.

Would appreciate some real gonzo cyberpunk shit like laser whips or smartguns.

The protagonist is, as the story makes obvious right away, a gambler archetype. He's perfectly believable and overall likeable. Most importantly, he doesn't dwell on his situation a-la "abloo bloo woe is me I must kill to survive I am now a monster" like some protagonists, but also doesn't go full murderhobo like some others.

The other characters are also perfectly serviceable, even those that only really show up once. Yeah, that's it. I don't like saying much about characterization since I tend to go on spoiler-filled tangents.

Once again, the title of this review couldn't be more accurate. That's what happens, to a tee. And it's pretty good.

Reviewed at: Chapter 6: Showdown in the Metro (Part 1)

This story is extremely engaging. After reading the first 5 chapters I can tell that there is something special here. Puck Mallory as the main character works so well with the story. His limited perspective makes reading the chapters extremely interesting, as one does not know what horror will come next. The story seems to always come up with unique but interesting situations for Puck to find himself trapped in. I'm looking forward to reading more!

In a New Light, LimeLight

Reviewed at: Chapter 6: Showdown in the Metro (Part 1)

From what I've read so far, I can say this story has a lot of potential. It's kept me riveted. I sat down in one sitting and read to the very end of what has come out so far. (Chapter 6). It rocks a futuristic dystopian theme. It marries the gladiators of old to the technology of new to create Limelight. I wholely believe this is going to be an epic story to read. The story thus far has been gritty and in a sense glorious. Subtle details captivate my imagination and the world thus far lets it run wild. I look foward to following the adventures of the main character. And not just him, there are many fascinating characters that I want to know more about. I think Dolos stands out the most behind Puck. His flair makes me believe there has to be more to the guy. Seems like a very important character. That's just one, there's also the characters of the first interlude that might suggest something more. I won't repeat myself again: This story has some real potential. I have not noticed any serious from a grammatical side of things. The story runs smooth and has a good pace. Definitely worth the read!

LimeLight: The Galaxy's Deadliest Gladiator Gameshow is a professionally written sci-fi action thriller. We follow Puck, who has been forced into the gladiator show after trying to cheat at gambling. With wit and a lot of snide humour, he has to fight his way through the games, facing professional killers from various races.

Style: one of the best I've seen on this site. I can easily visualise the environment of different stages with few, nice-flowing paragraphs. It shows at every opportunity that the author is a master of "show, don't tell" and reads like a professional novel.

Story: The story is solid and has enough foreshadowing elements to keep me interested. But the fighting scenes and atmosphere alone would already be enough to keep reading!

Character: Puck is the main character and so far there were few others who look like they might stay for a longer time in the story. He fleshed out nicely and really feels alive. His humour is awesome :-). Somehow I can not really bind with him, but that might be just my subjective view.

I can definitely recommend this novel to everyone who wants to read a highly action-packed thriller in a setting that reminds a bit of "The Running Man"!

Gambler tries to cheat the wrong people, ends up in a series of life-or-death situations. Grammar is fine, the story has either been professionally edited or gone over enough to remove all or nearly all mistakes. Some minor GameLit elements so far. With regards to the story, there's some stuff that happens, that I'm not sure if they're plot holes or stuff that the author will explain eventually. I do like the changing nature of the levels, and the scifi/cyberpunk trappings are pretty cool. Give it a try, and read through at least the second stage before giving up.

Bringing Cyberpunk to the LimeLight!

Reviewed at: Chapter 7: Showdown in the Metro (Part 2)

I love cyberpunk as a genre, despite me being relatively unfamiliar with it (and a beginner when it comes to writing it). That said, this author brings the elements of cyberpunk that we love (Greed, Corporate Corruption, and Danger), and brings a creative, fun twist to it.

The style of this author was one of the things that drew me out of it all. It was very quick to the point, and while fluff is overwhelming to a certain point, I found myself craving some fluff. Give me the marshmallows, dang it! :)

Now that I made a marshmallow fluff joke, let me break it down for you. The author has given us a beautiful sci-fi story, that is for sure, but the writing is very simplistic. I want to know the emotions behind the character, I want to understand what their motive is and why they are doing what they're doing. Does it make them angry? Does it make their face twitch?

These details are not necessary for every scene, of course, but adding these when appropriate will help bring these amazing characters to life even more!

I know I'm not the pickiest with grammar, but I didn't notice anything that brought me out of the story. Good job here!

The story, as I said, is phenomenal. The systems the author has introduced with Puck and his love for gambling is phenomenal, however, I think I'm missing some characterization from the lack of fluff I mentioned above. It is super minor, and I'm only noting it in this review because I think the story and characters introduced are phenomenal. If the author were to go in and edit, I'd suggest adding these micro details and microexpressions to help strengthen the interesting story (and, in the end, make the characters all that much more believable)!

This is notable in Chapter 7 when there is an explosion. I felt disconnected from the character as he recovered. Sure, he was not hurt, but I think it would be far more disorienting than it was conveyed. Here is a good place to add some fluff to fatten up the story. What was he feeling? Why was it disorienting (or, if it was intentionally not disorienting, why wasn't it?) These things would make it a 5/5 across the board!!

I mentioned the characterization issues in the story score, but I will not dock it off the character score because, well, I love Puck. I think his motives for what he does are realistic, and I found him likable and engaging. His conflicts are realistic to both the time and plot, and the way he deals with said conflicts brings out his archetype. I feel the fact that he is a gambling addict in the midst of a Cyberpunk era, and I am all for it.

Overall, this is one of the most interesting and unique Cyberpunk stories I've read, and I appreciate what the author is trying to convey here. I think this has the ability to take over Royal Road and revive a genre that I wish I saw more of!

Gamble your time away on this and you won't lose!

This wonderful book reminds me of the Repo! the Genetic Opera, that should totally be its soundtrack here. LimeLight: The Galaxy's Deadliest Gladiator Gameshow is pure adrenaline fuelled rush that keeps you on the edge of your seat as its intrepid protagonist struggles to survive a deadly game akin to the movie series Battle Royale! It's also a bit like the movie The Running Man, with the fighting and the killing and various cyberpunk characters coming to murder the hell out of the protagonist. Another good reference to this gripping tale, that's probably mostly going to be known by russian readers is Alexander Bushkov's book series Piranha Hunt.

Spelling and grammar is high quiality, no complaints to be made. The story style is tight, first person action and is very enjoyable to read.

The book's hero Puck Mallory is a rational archetype and a gambler who's been forced into a digital battle-royale/gladiators simulation in which he could die because he was trying to cheat at gambling. The environments which the author paints with words are believable. Puck's dry humor interjected into the otherwise dark tale makes it all the more fun to read. Tension is very well done.

Personally, I greatly enjoy books where the main characters are smart and take advantage of situations.

Keep up the amazing work! This book had a nice catch and potential for a series! Can't wait to read more chapters!