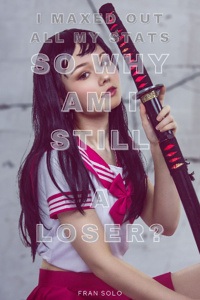 I maxed out my Stats, so why am I still a loser?

Ashner has no job, no girlfriend, and no good luck on his side. Until one drunken night, he finds a door to another world. And discovers monsters drop real gold. Not to mention a leveling system that's more detail orientated than he hoped for. With a tool that can bring him money beyond his wildest dreams, he decides to get as much as he can. Wealth, women, and status. But even with all that, why does his life always take the same unlucky turns?

Interesting MC, but too much suffer jerking

Reviewed at: Chapter 8 - Venture Into The Unknown

Grammar and Spelling have no problems as far as I can tell as non native speaker.

The story begins with an interesting introduction of the MC and the Portal mechanic is refreshingly different.

The MC is a relatable dude who had a few bad turns it luck.

This could be, because I skimmed over most flashback scenes that introduced them.

And that brings us to the worst part of the story.

I won't get into detail, but every single situation has obvious ways it wouldn't go that way for real. Too obvious to hold the suspension of disbelief.

Additionally I don't want to read them at all. This is personal preference, but i came to read a portal fantasy, not a war biography. Some scenes to establish the MC are fine if course, but not half the text.

Im the end that's all fine. But this story commits one of the worst offences a litrpg can do.

It has an MC that doesn't spend his points.

All he does with his exp is buying one time boosts for his friends or inviting harem girl #x in his world. And giving them never seen before OP power boosts.

All that said it was still an entertaining read, and I didn't drop it because of the criticized points above, but because I don't like litrpgs where only the MC has a system.

There aren't any noticable grammar mistakes except for some typos. No odd cookies in formating, and author uses custom font that looks better than standard one in my opinion.

Story is absolutly amazing. This isn't some beta gun geek going into another world, but story about a man and two other chads going back and forth the worlds. Worldbuilding is great and nothing is holding on a glue. I absolutely love how author handled the demi humans and slavery:

At first humans looks like cliche villians that are extremely cruel towards demi humans, but then it turns out that they were the first victims

Main character is relatable and feels like a real person. He might be bit perverted, but he cares about feelings of others' and isn't plain stupid. His backstory is interesting and gives him a reason to go foward. Other characters might not be on the same level as him yet, but they are holding up great.

He gathers two best friends to travel to another world and they are extremely likeable. The absolute man of culture takes the best side character award.

Reviewed at: Chapter 1 - The Key and the door.

The title even calls him a loser. Could not even finish the first chapter. A drunk, dishonorable discharged vet that does not pay child support. Why should he even be a main character?  Send him to jail.  I already do not care for him. People like him should not get special abilities.