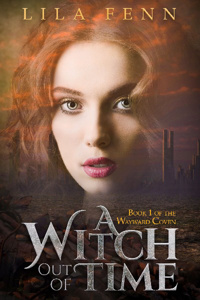 A Witch out of Time

After a brush with death at the hands of a vampire, a witch named Rory falls into a destroyed landscape, barely held together by magic.

Lost and 300 years from her own time, she befriends a Vietnam vet torn from the battlefield, a punk from the streets of London, a green-thumbed witch...

Oh, and the vampire who already tried to kill her once? He's there too, and he's pretty into her.

The already damaged future hangs in a delicate balance, and they, along with a few others, might be humanity's last chance.

A Witch Out of Time is the first book in the The Wayward Coven series, and is inspired by the urban fantasy genre, although, set in a far-off future time. Within these pages you will find questing witches, paranormal action, dystopian themes, and insatiable vampires along with swearing, violence, and sexual situations. If you like a dash of sci-fi mixed in with your fantasy and romance, you won’t want to miss out on this one!